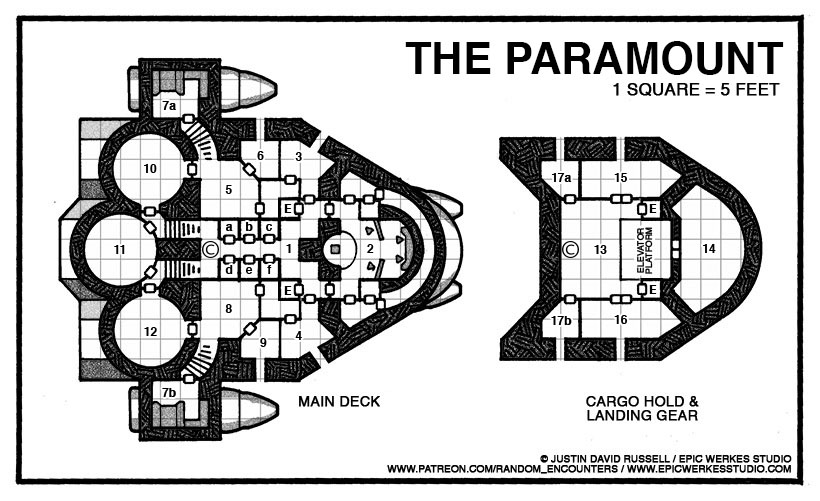 The Paramount is a vehicle and as such has special rules associated with it. Like a creature, a vehicle has six ability scores (Strength, Dexterity, Constitution, Intelligence, Wisdom, and Charisma) and corresponding modifiers. The Strength of a vehicle expresses its size and weight. Dexterity represents its ease of handling. The vehicle’s Constitution score covers its durability and the quality of its construction. Typically, a vehicle has a 0 for its Intelligence, Wisdom, and Charisma scores. If a vehicle has a 0 in a score, it automatically fails any ability check or saving throw that uses that score. How a vehicle is crewed and what actions it can take on its turn are described in the stat block for the vehicle.

The Paramount is a Russell-Class Science Vessel from the Planet Kyrr. It is equipped with three science domes and a large cargo bay. The ship can transport up to eight humanoids, although it’s large enough to hold more. The Paramount runs on an experimental fuel known as Blueshift which not only gives it its thrusting capabilities but also its regenerative qualities. A ROM-A1213 (“ROMA”) onboard computer manages ship operations.

Equipment and Options. As a science vessel and transport ship, the Paramount is not armed, although it could be equipped with long-range laser cannons. The cargo area can be retrofitted for two levels of additional quarters, allowing for an additional 18 passengers.

Mobile Headquarters. The Paramount is outfitted with everything a crew needs to indefinitely survive in space including food processors, medicine generators, and hyperbeds. See the adventure The Mystery of Hoegar’s Hollow for details.

Blueshift Regeneration. At the start of each day, each of the Paramount’s components regains 1d4 hit points if the component has at least 1 hit point and at least one Blueshift cell is intact.

Evasive Maneuvers. The Paramount can use its helm to take the Dodge action with its thrusters.

Hyperjump (Costs 3 Actions). The Paramount can use its helm to move with its Blueshift hyperdrive engine.

Move. The Paramount can use its helm to move with its thrusters.

Sensors. The Paramount can use its helm to operate its sensors.

Shields (Costs 2 Actions). The paramount can use its helm to raise its shields with its shield generator.

Move up to the speed of one of the ship’s thrusters, or use its Blueshift Hyperdrive. If the helm is destroyed, the Paramount can’t take any actions.

See the rules for hyperdrives below.

Choose one of the following effects:

Until the end of the Paramount’s next turn, each of its components gains a +5 bonus to its AC and resistance to force damage.

Ships equipped with hyperdrives can rapidly fly through space, covering great distances in a matter of seconds.

In order to operate a hyperdrive engine, the ship’s pilot must select a destination. If the distance is greater than the ship’s speed, it may take more than one round for the ship to arrive. For example, the Paramount’s Blueshift hyperdrive has a speed of 2 AU. For it to reach a destination 7 AUs away, it will take the Paramount 3 rounds.

The pilot’s familiarity with the destination determines whether the Paramount arrives there successfully. The GM rolls a d100 and consults the Hyperdrive Familiarity table.

Familiarity. “Jump beacon” means a permanent signal in space that ships equipped with long-range forward sensors use to navigate space.

“False destination” is a place that doesn’t exist. Perhaps you tried to use your sensors on an enemy ship but instead viewed a hologram, or you are attempting to a jump to a familiar location that no longer exists.

On Target. The ship appears where you want to.

Off Target. The ship appears a random distance away from the destination in a random direction. Distance off target is 1d10 x 1d10 percent of the distance that was to be traveled in a direction of the GM’s choice. For example, if you tried to travel 100,000 AU, landed off target, and rolled a 6 and a 4 on two d10s, then you would be off target by 24% or 24,000 AU.

Mishap. The unpredictable course results in a difficult journey. Each of the ship’s components takes 3d10 force damage, and the GM rerolls on the Hyperdrive Familiarity table to see where the ship winds up (multiple mishaps can occur, dealing damage each time).