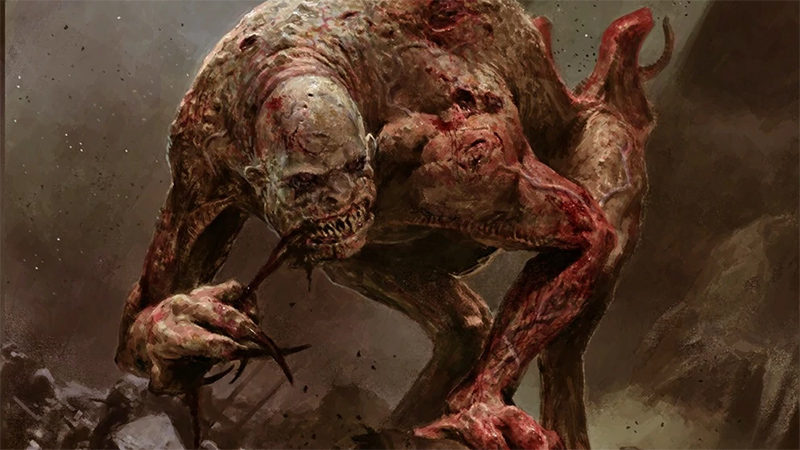 This is a FREE adventure for 3-5 1st Level Characters available to use for 5th edition campaigns.

I’m a big fan of Dyson Logos’ awesome maps. If you’re not familiar with Dyson yet, he’s an old-school cartographer who just did the maps for Waterdeep: Dragon Heist. He’s also got a site where he churns out, like, 2-3 awesome maps per week.

The only problem is… he doesn’t populate them!

That’s where I come in.

If you like this adventure, you can get the PDF on my Patreon. It’s only $3 per month to get this plus more than 70 PDFs.

The Travellers Caves are a small complex of winding multi-tiered caves and chambers which bear the evidence of several previous tenants over the years – from animal scat and hair to old broken boxes and cold, quiet campsites.

One narrow passage leads down from the complex into deeper caverns…

Short and sweet, with plenty of room left for interpretation.

I’ve added in the room numbers here with descriptions to follow. The numbers assume that the characters enter from the staircase at the northeast corner of the map and mostly follow the left wall.

The map is keyed up for a party of first-level adventurers and should take them to level two if they fight all of the challenges.

Dyson’s map is free for you to use commercially and personally. However, my notes on the map are for your personal use only.

Unless otherwise stated, here are the general features for Dyson’s Travellers Caves:

All the encounters listed here are keyed to the map of the Travellers Cave (image above).

The stairs at the northeast corner of the map descend from a small cave entrance in a hillside roughly 300 feet from a well-traveled road. Read this text block the first time the characters enter the caves:

Descending into the caves, the first thing you notice is the dull smell of garbage. There are broken boxes, glass, and bits of animal scat in this narrow nook.

Unfortunately, there’s nothing of any value here. This nook is where many travelers have stayed to get out of the weather, rarely venturing any further into the caverns.

Mud cakes the floor of this cave, runoff patterns sliding southward past a large stone column.

Walking within 5 feet of the edge of the cliff can be somewhat treacherous. A character that gets too close must succeed on a DC 10 Dexterity save or lose their footing and slide down into the pit 10 feet below taking 1d6 bludgeoning damage from the fall.

In addition, the bottom of the cliff is heavily infested with centipedes that live in the cool mud. There are three swarms of centipedes here that attack anything that disturbs their territory.

If characters search the mud with a successful DC 15 Intelligence (Investigation) check, they can find the remains of the last unfortunate soul that slipped and fell off the cliff. The skeleton has a small pouch containing 18 copper pieces, plus a small gold bracelet worth 25 gp. The bracelet has the inscription “To Delmar, Thanks for All Your Words” carved into it.

The mud from area 2 piles heavily in this room. So much mud, in fact, it’s attracted the attention of a gaggle of mephits.

The floors of this room aren’t easy to traverse and count as difficult terrain.

The mud in this room is nearly knee deep, sucking hard at your boots as you march.

There are four mud mephits hiding in the mud. If the characters weren’t quiet entering the room, the mephits remain motionless and try to surprise the PCs. Careful PCs might hear the mephits complaining from an adjoining room with a successful DC 14 Wisdom (Perception) check.

The ghouls from area 6 left warnings to those who dare trespass into their territory. Four skulls hang from the ceiling at the base of the steps leading from area 1.

With bits of flesh still clinging to the bone, four humanoid skulls hang from the stalactites above. It doesn’t take a lot of wisdom to know that these skulls are warnings: “Don’t go any further.”

Not only are the skulls warnings, but they’re traps, too. If anyone pulls on the rope holding the skulls in place, the stalactites break off. Avoiding the falling stalactites requires a DC 15 Dexterity save. Otherwise, anyone standing under the trap when they fall takes 1d6 piercing damage. A character can notice the trap with a successful DC 12 Intelligence (Investigation) check.

The ghouls keep this cavern guarded with a death dog named Rump and Yurk (it’s one death dog with two names). If the characters triggered the trap in area 4, then Rump and Yurk will stay hidden behind a cluster of stalagmites.

Bones litter the ground here, cracking under your feet. The stench of death hangs heavy. Once the room opens up a little, you immediately notice two pairs of glowing eyes in the darkness.

Rump and Yurk fight to the death.

The smell is unbearable. And it’s clear to see why: carcasses fill the room. And in the center of it all, gobbling the flesh from the bones of what could be an animal (or humanoid) are three hairless, vacant eyed gray-skinned humanoids. Once they see you, they hiss, exposing their freakishly long tongues, then charge at you.

There are two ghouls here. They will fight to the death, driven by the compulsion to eat the flesh of the characters.

Among the carcasses are the discarded goods of those the ghouls have eaten. The characters can find a total of 2,400 cp, 1,200 sp, and 110 gp. Plus, they can find a silver ewer worth 25 gp, a cloth-of-gold vestments worth 25 gp, and a brass mug with jade inlay worth 250 gp.

Long ago, a pair of Dwarven prospectors thought they’d stumbled on the motherlode in this cave. Turns out, however, that what they thought was gold was just yellowish quartz, hardly worth the effort to dig.

A large pit clings to the north side of the room. Old abandoned ladders and scaffolding are all that remain of what was probably once a mining operation.

Just as the dwarves discovered years ago, the characters will discover that there’s hardly anything of value of here.

Between flights of stairs, the passage opens up into a small cave. There, feasting on mushrooms, you discover what looks like a creature the color of yellow mud.

An ochre jelly has crawled up from the lower caverns, attracted by the ghouls’ feasting cave. It stopped midway to feed on mushrooms just at the top of the steps. Once it notices the characters, it will attack, hoping for a bigger meal.

If you’re not sure where to fit in Dyson’s Travellers Map into your adventure, here’s a few ideas to get your players’ characters moving in the right direction.

If you’re looking for a nice introductory adventure for first-level adventurers that could lead to more (ie the stairs going down to the lower caves), this is the perfect place to start.

And if you’re a Dungeon Master dying for some awesome maps, be sure to check out Dyson’s maps. They’re outstanding! And most are available for both personal and commercial use.

Finally, be sure to sign up for the email list so you can get more adventures, monsters, and player options. The opt-in is on the right side and down in the footer.