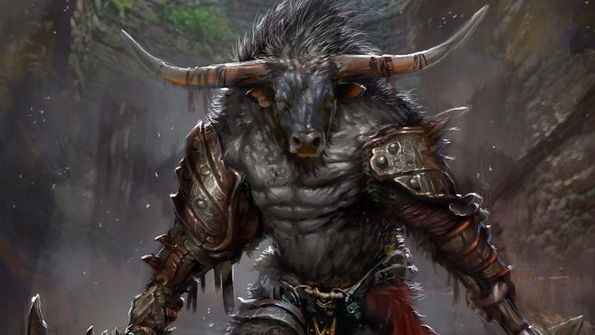 Torax, a minotaur barbarian, is fiercely loyal to Xentarich and maintains order among the troops. The crew, except Xentarich, view him with great fear and always treat him with respect. Torax usually watches over the gnomes in area 14.

Special Equipment. Torax is wielding a +1 flaming warhammer. It acts the same as a flame tongue, except it is a +1 weapon and a warhammer, plus the weapon is oversized. Torax is wearing +2 plate armor and a ring of protection. He is also carrying a potion of cure serious wounds and Quaal’s feather token (anchor).

Charge. If Torax moves at least 10 feet straight toward a target and then hits it with a gore attack on the same turn, the target takes an extra 27 (6d8) piercing damage. If the target is a creature, it must succeed on a DC 19 saving throw or be pushed up to 10 feet away knocked prone.

Labyrinthine Recall. Torax can perfectly recall any path he has traveled.

Relentlessness. If damage reduces Torax to 0 hit points, he must make a  Constitution saving throw with a DC of 5 + the damage taken. On a success, Torax drops to 1 hit point instead.

Move. Torax moves up to half his speed.

Ferocious Presence (Costs 3 Actions). Torax targets one creature he can see within 30 feet of him. If the creature can see or hear Torax, it must succeed on a DC 14 Wisdom saving throw or be frightened until the end of Torax’s next turn.  On subsequent turns, Torax can use his bonus action to extend the duration of this effect on the frightened creature until the end of his next turn. The effect ends early if the creature ends its turn out of line of sight or more than 60 feet away from Torax. If the creature succeeds on its saving throw, it is immune to Torax’s Ferocious Presence for 24 hours.

Torax is featured in the ‘Heart of the Iron God’ adventure.