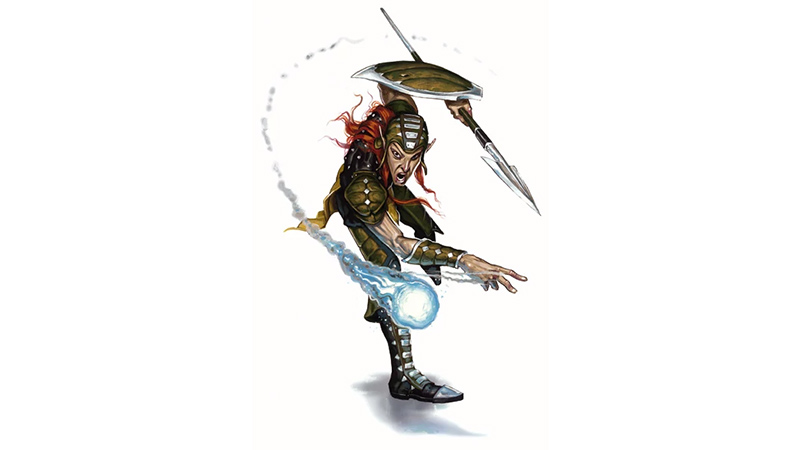 Volo’s Guide to Monsters generously introduces statistics for a variety of mages, each tied to a different arcane tradition. However, the one type of mage that’s missing, it seems, are the war mages from Xanathar’s Guide to Everything.

Since I need a few war mages today, I thought I might stat them up. Not only for my use, of course, but for yours as well. Enjoy!

Power Surge (Recharges after a Short or Long Rest).  Once per turn, when the war mage deals damage to a creature or object with a wizard spell, it can add 4 force damage. Whenever the war mage successfully ends a spell with dispel magic or counterspell, it gains one extra use of this trait to a maximum of 3 extra uses. If the war mage finishes a long rest before using the extra uses, the extra uses are removed.

Spellcasting. The war mage is a 9th-level spellcaster. Its spellcasting ability is Intelligence (spell save DC 14, +6 to hit with spell attacks). The war mage has the following wizard spells prepared:

Tactical Wit. The war mage adds its Initiative modifier to its initiative rolls.

Arcane Deflection. When the war mage is hit by an attack or fails a saving throw, it can use its reaction to gain a +2 bonus to its AC against that attack or a +4 bonus to that saving throw. Once the war mage uses this feature, it can’t cast spells other than cantrips until the end of its next turn.

Kinda nervous using these against my Saturday group, to be honest. They haven’t really had a ton of experience running up against magic users and the party wizard is out for the day (OU vs Texas game, ya know).

Who knows what will happen? <nervous laugh>