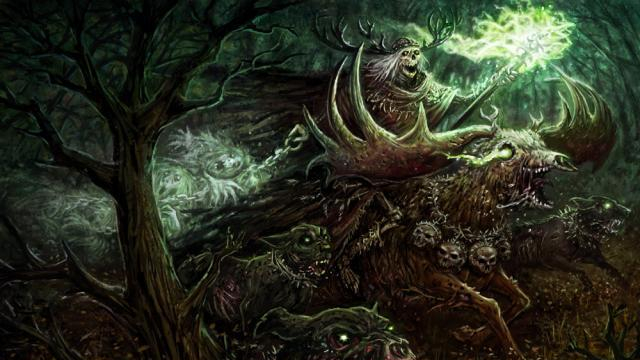 Zoradin the Deadcaller appears in the short adventure, The Terror at Prior’s Hill. His official stats are here and will be in print in the second issue of BroadSword Monthly.

In life, Zoradin was a druid and member of the Circle of Towers. As the land grew cursed with the taint of Zogmoth in nearby Forsaken Peak, Zoradin’s interests grew twisted with it. He began to see value in the cruel nature of the undead. Eventually, he and six other druids loyal to him performed a dark ritual that turned them all into undead abominations.

Immediately, the other druids in the Eastern Borderlands saw Zoradin as a danger. Working with a group of adventurers, the druids trapped Zoradin and the other six in a dungeon beneath Prior’s Hill. Then, they set eight black standing stones made of enchanted black glass over the entrance. Unable to match the combined power of the other druids, Zoradin and his minions were trapped. Losing his connection to the undead of the land, Zoradin’s power waned. Eventually, he succumbed to a great slumber.

Now, Zoradin has once again risen. The deathless druid seeks to reclaim his power over undead. He also seeks revenge against those work worked against him. Even if the adventurers and druids that trapped him are no longer alive, he will track down their descendants and destroy them.

Magic Resistance. Zoradin has advantage on saving throws against spells and magical effects.

Rejuvenation. When Zoradin’s body is destroyed, his soul lingers. After 10 days, his soul inhabits and animates another corpse on the same plane of existence and regains all its hit points. While the soul is bodiless, if all eight of the ivory jars that contain his remains (see “Terror at Prior’s Hill” for details) are destroyed, Zoradin’s soul is forced to go the afterlife and does not return.

Spellcasting. Zoradin is an 11th-level spellcaster. His spellcasting ability is Wisdom (spell save DC 15, +7 to hit with spell attacks). Zoradin can cast the following druid spells:

Turn Immunity. Zoradin is immune to effects that turn undead.

Life Drain. Melee Weapon Attack: +5 to hit, reach 5 ft. one creature. Hit: 9 (2d6 + 2) necrotic damage. The target must succeed on a DC 13 Constitution saving throw or its hit point maximum is reduced by an amount equal to the damage taken. This reduction lasts until the target finishes a long rest.

Death Surge (Recharge 6). Zoradin releases magical necrotic energy from his body. Each creature within 30 feet of Zoradin must make a DC 13 Constitution saving throw, taking 21 (6d6) necrotic damage on a failed saving throw, or half as much damage on a successful one. This attack has no effect on undead or constructs.