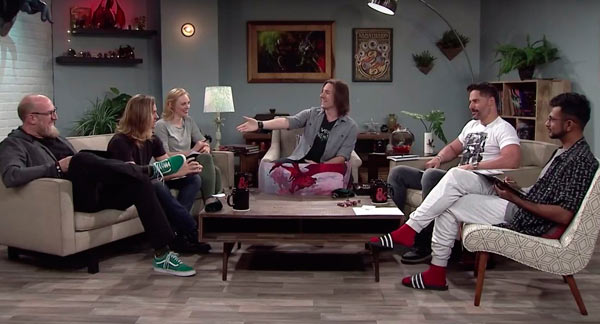 There’s no denying it. Dungeons & Dragons is a big deal. And D&D players no longer have to hide their identities. In fact, many celebrities play D&D, too. Here is a list of 10 celebrities who’ve recently come “out from behind the Dungeon Master screen” and revealed their love for the game.

Not only does this star of True Blood and Justice League play Dungeons & Dragons regularly, but he also has his own fashion line just for Dungeons & Dragons. He’s also responsible for creating a few more D&D nerds around Hollywood, including a few on this list. Rumor has it, however, that has yet to convert his equally famous wife, Sophia Vergara into a D&D nerd. Give it time, Joe. She’ll come ’round.

The famous talk show host has revealed on numerous occasions that he’s an avid Dungeons & Dragons fan. In fact, Stephen Colbert is a total grognard, too, having played the game since 1976. Supposedly, he had a character named Lulu the Witch.

Vin isn’t only a D&D nerd, but he wrote the introduction for the third edition Players’ Handbook! In fact, Vin had the opportunity to turn his old character in a movie. The movie The Last Witch Hunter is actually based on Vin Diesel’s old character, a ranger.

Another True Blood alum (and Marvel’s Daredevil star), Deborah Ann Woll is a huge D&D nerd. Supposedly, she plays along with Joe Mang and his crew, but also has appeared on Critical Role and her own D&D show coming up soon on Geek & Sundry.

Long before they were Jason Bourne and Batman, or even winning Oscars for screenplays, these two were a couple of geeky kids playing D&D. Apparently, the two both loved playing magic-wielding elves.

Somehow, in between eating 8,000 calories per day and bench-pressing Buicks, Dwayne “The Rock” Johnson is a big-time geek, too. In fact, he says that he’s even dabbled in the world of Dungeons & Dragons a bit. However, Dwayne admits that he’s more of a board game nerd than a roleplaying nerd. Well, nobody’s perfect.

Yeah, like anybody reading this is surprised that the co-founder of Tesla and SpaceX is a D&D nerd. Growing up in South Africa, Elon played a whole lot of D&D with his brother and friends. Something tells me that when he’s not busy running his multiple billion dollar companies, Elon likes to unwind with a little d20 action.

Yep. Dame Judi Dench is a D&D nerd. And she has Vin Diesel to thank for that. Supposedly, Vin taught her how to play on the set of the Chronicles of Riddick. And now she–no shit–Dungeon Masters for her grandchildren. Uh, got room for another player?

Joseph Gordon-Levitt is another one of those dudes who’s got looks, charms, brains, and fame. And if that’s not enough, he’s also a big ol’ nerd, too, having played D&D since he was 14.

Finally, Steven Spielberg, one of the greatest directors to have ever lived, is a massive D&D nerd. In fact, D&D is how he cast the roles for Robert Macnaughton and Henry Thomas for their roles in E.T. The Extraterrestrial. You might recall that they were playing the game at the beginning of the movie.