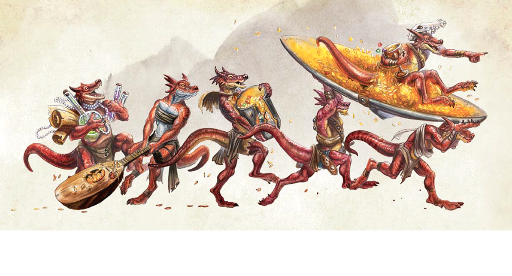 Mobs are fun. After all, every player with a high-level character imagines what it’d be like to run through a mob of a bunch of CR 1/8 weenies.

Logistically, though, it’s a pain, especially for the GM. For example, if you wanted to challenge a group of four 10th-level adventurers with kobolds (CR 1/8), you would have to toss 48 kobolds at them just for it to be a “Medium” level challenge. I promise you, there’s no DM on earth that wants to run that combat.

Now, the DMG gives some rules for running mobs, mostly in the amount of damage that they do. And that’s helpful. But it still doesn’t address the insane number of hit points a mob’s going to have, the fact that the characters can only attack so many at once, and other complicated issues that will bog down playtime considerably. A Medium-level encounter that’s destined to only hand out 300 XP per character at level 10 just isn’t worth the trouble.

What follows is my solution for this conundrum: advanced mob rules.

The best way to deal with mobs is to treat them like a terrain hazard or a complex trap. XGtE has some great rules for complex traps. After all, when dealing with mobs, that’s exactly what you’re fighting: a complex trap. Therefore, all you really need to do is to tie the elements of the complex trap to a mob of monsters, and presto: it’s an easy-to-run encounter.

Let me break it down for you.

Active Elements. Active elements likely include attack methods for the mob itself which it deals during its initiative.

Dynamic Elements. Like traps, a dynamic element is a threat that arises or evolves as the trap functions. Usually, these dynamic elements take effect at the end of each of the mob’s turns or in response to the characters’ actions.

Constant Elements. A mob poses threats even when it’s not taking its turn. The constant elements explain how these parts of the mob function. For example, when a mob surrounds a group, it’s likely that moving through the mob becomes difficult, creating difficult terrain or relying on Athletics or Acrobatics checks to move through them. It can also include extra attacks by the mob.

Countermeasures. Finally, the countermeasures for a mob usually involves attacking it but may include other means of destroying it (such as scaring off the mob, etc.)

Additional Items. Mobs of monsters are living things. As such, they have abilities, saving throws, and skills. In addition to the aforementioned elements, I’ve included a few features from monster stat blocks as well.

After resolving the effects of the mob’s active elements, check its dynamic elements to see if anything changes about the mob. Many mobs have effects that vary during an encounter. The creatures may work themselves into a frenzy, dealing more damage as it remains active, or call upon additional creatures to join the group.

Since mobs represent large groups of creatures, the typical creature size and space rules don’t apply to them. For example, fifty kobolds are going to fill way more space than that of a gargantuan creature (which would normally only fill 16 squares). The Mob Size and Space table below demonstrates how much space mobs fill.

To make things easier, for rooms that fit roughly the square or hex count listed on the Mob Size and Space table below, assume that the mob fills the entire room. For larger rooms or outside areas, you can use a single large miniature to represent the entire mob.

The following mob can be used to challenge characters.

When pressed, kobolds team up in massive hordes, using their overwhelming numbers to take down even the most dangerous foes. These mobs can contain as few as 16 kobolds or as many as 100. The following description details a massive mob of 50 kobolds.

Trigger. When the characters enter the room where the mob is hiding, the mob attacks.

Active Elements. On its turn, the kobolds attack each hostile creature within 30 feet of them using their slings and daggers.

Constant Elements. The mob poses not only poses a threat to the characters’ health but also acts as difficult terrain.

Countermeasures. As the mob loses hit points, it loses its ability to harm its targets.

Thumbnail art by Wizards of the Coast