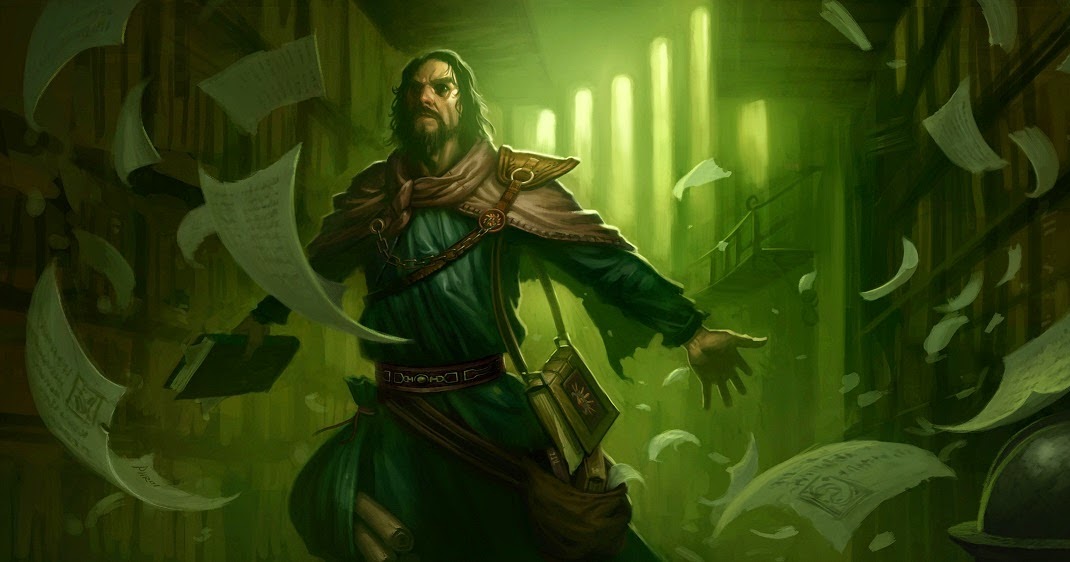 “You can either sell me the cursed stele, or you can wait for its original owner to come for it. The choice is yours.”

An archivist is a wielder of divine magic, similar to a cleric only in the type and nature of the magic at his command. Indeed, the archivist has more in common with the wizard than he does with the standard servant of the divine, due to the scholarly way in which he collects and maintains his spell selection. Archivists seek out esoteric sources of divine lore, wherever those sources might be, securing those secrets for themselves and their fellow scholars.

As an archivist, you gain the following class features.

Hit Points at Higher Levels: 1d6 (or 4) + your Constitution modifier per archivist level after 1st

You start with the following equipment, in addition to the equipment granted by your background.

As a devout researcher of divine magic, you can cast cleric spells. See chapter 10 of the PHB for the general rules of spellcasting and chapter 11 for the cleric spell list.

At 1st level, you have a prayer book containing six 1st-level cleric spells of your choice. Your spellbook is the repository of the cleric spells you know, except your cantrips, which are fixed in your mind.

The Archivist table shows how many spell slots you have to cast your spells of 1st level and higher. To cast one of these spells, you must expend a slot of the spell’s level or higher. You regain all expended spell slots when you finish a long rest.

You prepare the list of cleric spells that are available for you to cast, choosing from the cleric spell list. When you do so, choose a number of cleric spells equal to your Intelligence modifier + your cleric level (minimum of one spell). The spells must be of a level for which you have spell slots.

For example, if you are a 3rd-level archivist, you have four 1st-level and two 2nd-level spell slots. With an Intelligence of 16, your list of prepared spells can include six spells of 1st or 2nd level, in any combination. If you prepare the 1st-level spell cure wounds, you can cast it using a 1st-level or 2nd-level slot. Casting the spell doesn’t remove it from your list of prepared spells.

You can change your list of prepared spells when you finish a long rest. Preparing a new list of cleric spells requires time spent studying your prayerbook and memorizing the incantations and gestures you must make to cast the spell: at least 1 minute per spell level for each spell on your list.

Spell save DC = 8 + your proficiency bonus + your Intelligence modifier

You can cast a cleric spell as a ritual if that spell has the ritual tag and you have the spell prepared.

You can use a holy symbol (found in chapter 5 of the PHB) as a spellcasting focus for your archivist spells.

Choose one knowledge specialization: Arcana, History, Nature, or Religion. Each specialization is detailed at the end of the class description (only one is here on the blog, the others will be released with the PDF on Patreon). Your choice grants you specialization spells and other features when you choose it at 1st level. It also grants you additional ways to use your Dark Knowledge when you gain that feature at 2nd level, and additional benefits at 6th, 8th, and 17th levels.

If you have a specialization spell that doesn’t appear on the cleric spell list, the spell is nonetheless a cleric spell for you.

At 2nd level, you gain the ability to apply your intense studies to tracking, hunting, and even talking to the monsters of the multiverse. The secrets of Dark Knowledge pertain to only aberrations, celestials, elementals, fiends, monstrosities, and undead. You start with two effects: Tactics and an effect granted by your specialization. You gain additional effects as you advance in levels. Some specializations grant you additional effects as you advance in levels, as noted in the specialization description.

When you use your Dark Knowledge, you must choose a target and choose which effect to create.

Using Dark Knowledge requires an ability check using a skill appropriate to the creature you are using it on as follows:

The DC of the check equals 15. Dark Knowledge can only be used once on a given creature. The target creature must be within 60 feet and you must be aware of it, although you do not need to have line of sight to the creature. Depending on the effect used, your dark knowledge can affect a single creature or all creatures of the same race. The effects of Dark Knowledge last for 1 minute unless otherwise stated.

Some Dark Knowledge effects require saving throws. when you use such an effect from this class, the DC equals your archivist save DC.

At 20th level, your ability to understand and comprehend multiple subjects is rarely bested. Your Intelligence and Wisdom scores increase by 4. Your maximum for those scores is now 24.

All archivists are broad generalists, however, the majority spend their time focusing on a singular subject which they specialize in. This expertise often makes them the leading mind in their field of study. In fact, some experienced archivists may be the only source in the entire multiverse for particular subjects, possessing lore that not even the subject of their specialization themselves may be aware of.

Thanks to a thorough understanding of the mechanics of magic, arcane specialists are also masters of ranged spell combat. Their high intelligence helps them move and act quickly, too, providing a distinct advantage in combat against slower foes.

Every element of magic falls under your purview. From casting practices to spell and magic item creation to how planar influences affect the multiverse, there is little in the world of magic that escapes your intellectual grasp. Your understanding of arcana also gives you an advantage against unnatural creatures like aberrations.

At 1st level, you become proficient with the Arcana skill and your proficiency bonus is doubled for any ability check you make with it. In addition, you learn one wizard cantrip of your choice.

Also at 1st level, you have trained in the ways of magical combat. You gain a +2 bonus to attack rolls you make with ranged spell attacks.

At 6th level, as an action, you can use your Dark Knowledge to detect a flaw in a creatures’ defenses and make a carefully aimed attack at it. This effect can only be used on a single target. On a successful Dark Knowledge check, you can immediately use your bonus action to make an attack roll against the creature and your attack roll is made with advantage. If the attack roll hits, all of your allies within 30 feet of you may make their next attack roll against the target with advantage as well. The effect ends at the start of your next turn.

Additionally, if you are surprised at the beginning of combat and aren’t incapacitated, you can act normally on your first turn, but only if you use a ranged spell attack before doing anything else on that turn.

Right now, this new class option is in review status while I get feedback on Reddit and Instagram. Once I make a few more tweaks, it will appear on my Patreon in a PDF format.

Right now I’m running a special on my Patreon. If you sign up for at least the $3 tier, I will make your requests within 24-hours.

In addition to having your requests made, you also get access to nearly ALL the PDFs that I make for the site. It’s a helluva deal, as I tend to put out 2-3 PDFs per week. Often, a lot more!

Follow DMDave on Patreon and have your request made in 24-hours.

And of course, it’s always free to put in requests! And eventually, I get to most of them. Put in a request with me today and get on the queue.

Art by Blizzard Entertainment. Original flavor text by Wizards of the Coast.