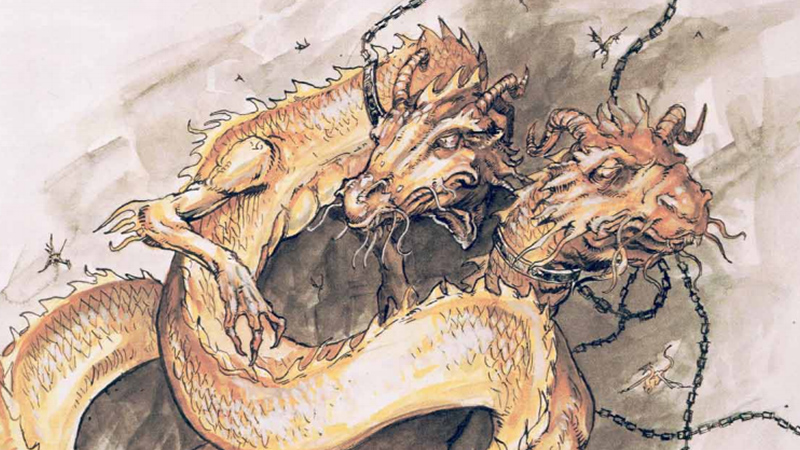 Welcome back to this ongoing series on the Astral Plane. Last time, I covered the basic differences between the Astral Plane and the Prime Material Plane. Today, I want to jump into some monster encounters, because let’s face it: we all love monsters.

I’m going to start with the classic Astral Dragon (which came in as a request). This is a first for me because this is the strongest monster I’ve created so far on this blog. The “mated” versions of Astral Dragons are fierce foes, with shared Intelligence scores second only to Acererak the Undying.

It’s free for you to use in your 5th edition Dungeons & Dragons campaign. Just not commercially!

Note: Much of the text and imagery in this article comes from the second edition Monstrous Manual which is available on dmsguild.com.

“Astral Dragon” is a general term for a race of ancient golden dragons to whom all dragons of Krynn can trace a common ancestry. The immortal astral dragons are the personification of neutrality in dragons.

What are the origins of Astral Dragons?

Among the first dragons ever created by the gods were two astral dragons named Deion and Procene. These dragons were directed to give birth to a race of dragons that the gods would adopt as their own. Selected newborns were taken from their parents and transformed to reflect the personalities and philosophies of the gods who adopted them. Thus were created early archetypes of black, red, gold, silver, and other dragons. Deion and Procene remained neutral; in exchange for their offspring, the gods pledged to leave them alone.

When the couple grew weary of the constant tension between the good and evil dragons, they appealed to the gods to be relieved of their obligations on Krynn. The gods granted their wish and relocated them to an alternate plane of existence in the Abyss. In time, Deion and Procene gave birth to new generations of neutral dragons.

An unmated astral dragon is a dull yellow in color and about five feet long with human hands and long, slim fingers. It has huge black eyes. and its scales are covered with fine blond fur. Though a hatchling is slightly less formidable, an astral dragon does not progress through the various age categories as do other dragons; its statistics do not change significantly until it becomes part of a mated pair.

What is a mated pair of Astral Dragons?

When an astral dragon finds a suitable mate, the couple appeals to the gods of neutrality to sanction their union. If approval is granted, the mated astral dragons undergo a remarkable transformation. To symbolize the union, the gods create a 100-foot golden chain, each end of which encircles the mates’ necks to link them for all eternity. The mates grow to a length of 50 feet and become enveloped in a permanent aura of golden light. Their intelligence and abilities increase to god-like levels.

Thereafter, the couple lives, fights, works, and plays as a unit. If the chain is broken and the mates are separated by a distance of at least 100 yards for 30 days, they will revert to their original, weaker forms; however, it requires the power of a wish spell or its equivalent in order to break the chain.

Heightened Astral Vision. While on the Astral Plane, the astral dragon can see up to ten miles in any direction so long as nothing impedes its vision.

Rejuvenation. If the astral dragon is destroyed, it regains all its hit points in 1 hour unless it is destroyed with a power word kill or wish spell.

Multiattack. The astral dragon makes three attacks: one with its bite and two with its claws.

Heightened Astral Vision. While on the Astral Plane, the astral dragons can see up to ten miles in any direction so long as nothing impedes their vision.

Legendary Resistance (3/day). If the dragons fail a saving throw, they can choose to succeed instead.

Rejuvenation. If the astral dragons are destroyed, they regain all their hit points in 1 hour unless they are destroyed with a power word kill or wish spell.

Magic Resistance. The dragons have advantage on saving throws against spells and other magical effects.

Two Heads. The astral dragons have advantage on Wisdom (Perception) checks and on saving throws against being blinded, charmed, deafened, frightened, stunned, and knocked unconscious.

Multiattack. The astral dragons can use their Frightful Presence. They then make six attacks; two with their bites and four with their claws.

Cantrip. The dragons cast a cantrip.

Wing Attack (Costs 2 Actions). The dragons beat their wings. Each creature within 15 feet of the dragons must succeed on a DC 23 Dexterity saving throw or take 14 (2d6 + 7) bludgeoning damage and be knocked prone. The dragons can then fly up to half their flying speed.

Astral dragons live in immense keeps of black crystal built for them by the gods. Their power is so immense, the very fabric of the Astral Plane is affected by their presence.

On initiative count 20 (losing initiative ties), the dragons take a lair action to cause one of the following effects; the dragons can’t use the same effect two rounds in a row:

The region containing the legendary astral dragons’ lair is warped by the dragons’ magic, which creates one or more of the following effects:

Thanks for reading up on the classic 2nd edition Astral Dragon. If you like what you read, help spread the word by clicking one of the share buttons below.

And if you aren’t already, be sure to follow along by entering your email address to the right or down in the footer.