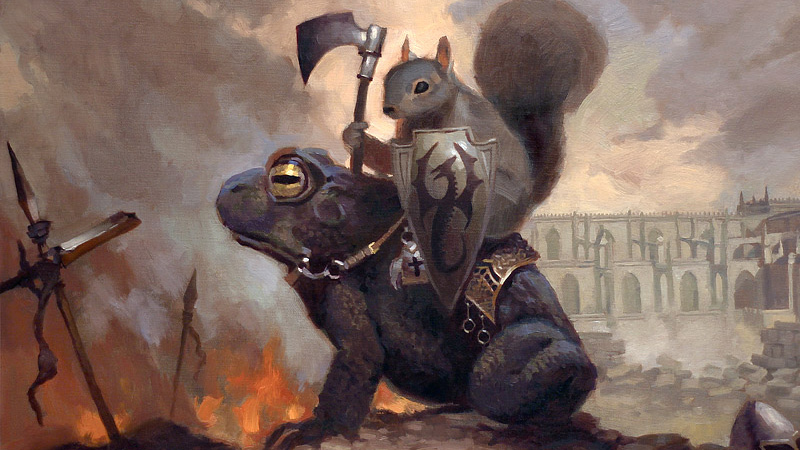 I was just reading Keith Ammann’s treant tactics over on his blog (and loved it of course), and started thinking about some cool support for treants.

After all, treants are huge brutes of the “I’ma gun clobber you” variety. They have one ranged attack, but as Keith points out, that’s a move that they’ll save for when they’re really ticked off at you. Plus, the DPS isn’t nearly as good as them just getting in the face of those who dare trespass and smacking them with their branches a few times.

But what sort of help do 5e treants need?

Therefore, when coming up with support monsters, we’ll need stuff that can help it out so it doesn’t get cut down. Literally.

I wish I could say that we DMs live in a world where players won’t be meta and not think about fire and axes when fighting trees, but uh… that ain’t happening.

A Variant for the Treant

My first thought turns to the Ogre Howdah of Mordenkainen’s Tome of Foes. It’s an ogre with a shack on its back where goblins/kobolds/etc can hang out and fire arrows and be relatively safe from danger. Kind of a cool concept.

So here’s a new trait for the treant:

Many treants allow tiny creatures to live in their branches. A treant that does so picks up the following additional trait.

Now that we’ve got the “fort”, it’s time to populate it.

Instead of goblins, the treant’s got little, Intelligent squirrel people in it with tiny, adorable bows-and-arrows. They hide in the treant’s branches, getting cover bonuses, and can make attacks from within. If I make them tiny sized, a ton of these can fit in the treant’s branches! And I’ve been on an anthro-humanoid kick lately, so creating what I’m now calling scurries (squirrelfolk) should be a ton of fun. And since I just found a cool picture of a squirrel knight riding a bullfrog into battle, I’m pretty sure I’m going to have to create a scurry knight, too!

What else makes its home in trees? Birds, of course! How about assisting this army of scurries is a wise, old owl that can cast magic? That’d be a hoot!

Oh yeah. I made that joke.

Our owl wizard will be another Tiny humanoid called a strig.

Finally, I think an elemental might round out this group fairly well, Something that can work as support and take care of the big dangers like wizards with fire magic or barbarians with axes. I’m imagining an elemental that has a close kinship with the treant a la a dryad crossed with an air weird. It can help douse those flames, push away annoying wizards, and even go toe-to-toe with other dangerous melee combatants.  We’ll call it a wind friend.

Keen Smell. The scurry has advantage on Wisdom (Perception) checks that rely on smell.

Martial Advantage. Once per turn, the scurry can deal an extra 2 (1d4) damage to a creature it hits with a weapon attack if that creature is within 5 feet of an ally of the scurry that isn’t incapacitated.

Keen Smell. The scurry has advantage on Wisdom (Perception) checks that rely on smell.

Martial Advantage. Once per turn, the scurry can deal an extra 5 (2d4) damage to a creature it hits with a weapon attack if that creature is within 5 feet of an ally of the scurry that isn’t incapacitated.

Multiattack. The scurry makes two attacks with its shortsword.

Leadership (Recharges after a Short or Long Rest). For 1 minute, the scurry can utter a special command or warning whenever a nonhostile creature that it can see within 30 feet of it makes an attack roll or a saving throw. The creature can add a d4 to its roll provided it can hear and understand the scurry. A creature can benefit from only one Leadership die at a time. This effect ends if the scurry is incapacitated.

Parry. The scurry adds 2 to its AC against one melee attack that would hit it. To do so, the scurry must see the attacker and be wielding a melee weapon.

Flyby. The strig doesn’t provoke opportunity attacks when it flies out of an enemy’s reach.

Keen Hearing and Sight. The strig has advantage on Wisdom (Perception) checks that rely on hearing or sight.

Spellcaster. The strig is a 5th-level spellcaster. Its spellcasting ability is Intelligence (spell save DC 12, +4 to hit with spell attacks). The strig has the following wizard spells prepared:

Air Form. The wind friend can enter a hostile creature’s space and stop there. It can move through a space as narrow as 1 inch wide without squeezing.

Wind Blast (Recharge 5-6). The wind friend creates a line of strong wind 60 feet long and 10 feet wide until the start of its next turn. Each creature that starts its turn in the line must succeed on a DC13 Strength saving throw or be pushed 15 feet away from the wind weird in a direction following the line. Any creature in the line must spend 2 feet of movement for every 1 foot it moves when moving closer to the wind friend. The blast disperses gas or vapor, and it extinguishes candles, torches, and similar unprotected flames in the area. It causes protected flames, such as those of lanterns, to dance wildly and has a 50 percent chance to extinguish them.

This is a new blog, and I’m looking to get the word out! Daily monsters, adventures, articles and more, all free for you to use for your fifth edition Dungeons & Dragons adventures.

See you next time and hope you enjoy!