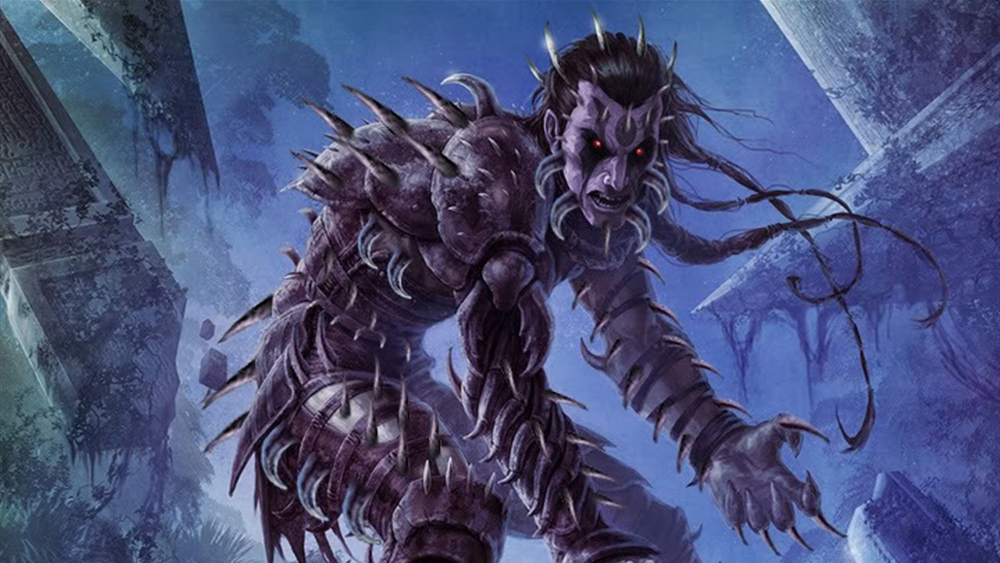 I was about to head to bed when I realized I hadn’t created a monster for today. Having just received the old third edition Monster Manual 2 in the mail today, I figured I’d flip to a random page in the book and do a Fifth Edition conversion.

What did I come up with?

From the third edition Monster Manual 2:

Bladelings are xenophobic beings of humanoid shape. Though they hail from Acheron, most scholars believe that the race emigrated there from another plane, possibly the Nine Hells of Baator, the Bleak Eternity of Gehenna, or even some unknown metal-based plane.

A bladeling has skin of a dull metallic hue, sported with patches of metallic spines. Its eyes gleam like shards of purple ice, and its blood is black and oily.

At CR 1 with only a few cool tricks up their sleeves, these guys should be pretty simple to make. Plus, I think I’ll even toss in a (somewhat broken) playable race!

Razor Storm (1/day). The bladeling expels shrapnel-like bits of its skin in a 15-foot cone. Each creature in that area must make a DC 11 Dexterity saving throw, taking 7 (2d6) piercing damage on a failed save, or half as much damage on a successful one. After this attack, the bladeling’s Armor Class decreases by 2 for 24 hours.

Bladelings have some interesting traits that may or may not work with your Dungeon Master’s game. Make sure to check with the DM before creating a bladeling character.

Age. Bladelings reach adulthood at age 8 and live up to 60 years.

Alignment. As beings from Acheron, bladelings are always lawful and most tend towards evil. However, there are occasional bladelings who stick with the lawful side of their alignments ignoring the tug-o’-war of good and evil.

Size. Bladelings are shorter than humans, ranging from 4 to 5 feet. As beings with skin made of metal, they can weigh anywhere from 400 to 750 pounds. Your size is Medium.

Darkvision. Bladelings are outsiders from Acheron and have grown accustomed to the dark skies there. You can see in dim light within 60 feet of you as if it were bright light, and in darkness as if it were dim light. You can’t discern color in darkness, only shades of gray.

Fiendish Origins. You have resistance to fire and cold damage. And you are immune to acid damage. Your type is fiend.

Metallic Skin. Your base armor class is 14 + your Dexterity bonus. Because of your metallic nature, you cannot take the Druid class. In addition, you gain no benefit from the Unarmoured Defense feature of the Barbarian or Monk classes.

Razor Spikes. Your body is covered in razor spikes. You cannot wear armor of any type and must wear clothing especially suited to you. Once per day, you can eject bits of your razor skin in a 15-foot cone. Each creature in the cone must make a Dexterity saving throw with a DC of 8 + your proficiency bonus + your Dexterity modifier or take 2d6 piercing damage on a failed save, or half as much damage on a successful one. Once you use this ability, your Armor Class decreases by 2 for 24 hours.

Languages. You can speak, read, and write Common and Infernal.

Help spread the word of the bladelings by clicking one of the share buttons below.

And if you aren’t already following along, be sure to sign up with the email list over on the right-hand side or down in the footer.

As usual, these monsters are free for you to use in your Fifth Edition Dungeons and Dragons campaign. Just not commercially!