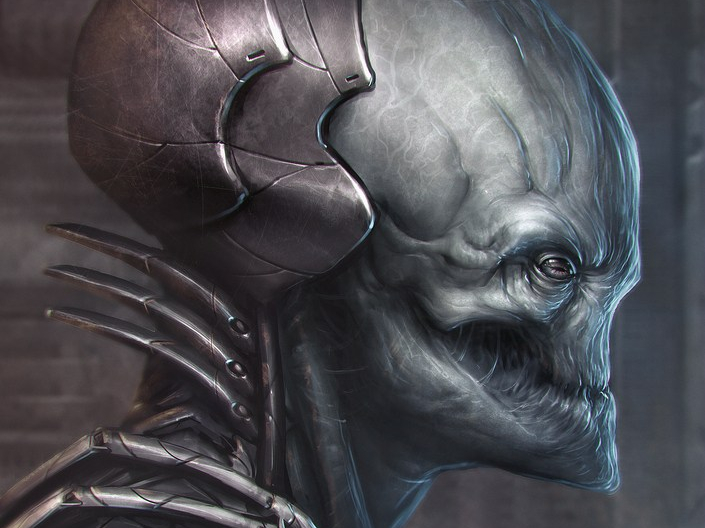 A few days ago, I announced that I would be slowly working my way through a science fiction series now called Blueshift. The basic idea of Blueshift is that it’s a Star Trek style roleplaying game where the players are all members of a space exploration crew.

In the last edition, I created a “checklist” of sorts of all the stuff that I would have to create for Blueshift by going through each and every Fifth Edition book and making notes on what can stay, what needs changing, and what gets cut.

This Blueshift entry was paid for by one of my patrons. Thank you for your patronage! And I hope you enjoy.

The races of Blueshift are the same as those found in the Fifth Edition PHB, except with the following changes as noted:

In addition to the races outlined in the PHB, there are two new races that you can play in Blueshift: Evos and Synthetics.

Evos are an ancient race of aliens known for their wisdom and insight. They are much taller than humans, standing seven feet tall, and have two additional arms.

Synthetics are artificial lifeforms created to perform difficult tasks that carbon lifeforms would otherwise have trouble performing. Although they are designed to look human, they have an eerie manner to them that reveals their android nature.

Your evos character has certain characteristics in common with all other evos.

Age. Evos mature around 16 years of age. However, they live much longer than most races, often living for a thousand years or more. As they age, their skin hardens and they begin to lose mobility until finally turning to stone. Evos graveyards look like statuaries and can often be found on lifeless moons, asteroids, or even among the rings of a Jovian planet.

Alignment. While ethically ambiguous, evos tend toward moral extremes. There are good evos which are kind and gentle souls that only want to help life, and there are evil evos who see no gain in friendship or kindness.

Size. Evos are much taller than humans, standing 7 to 8 feet tall. They tend to be light, however, weighing no more than 150 to 170 pounds. Your size is Medium.

Extra Arms. Evos have two smaller arms in the center of their chests. You can grasp things with your extra arms and they have a reach of 5 feet. You can use your extra arms to lift a number of pounds equal to five times your Strength score. Whenever you make a grapple check and you are not holding anything in your extra arms, you are considered proficient in the Athletics skill and add double your proficiency bonus to the check, instead of your normal proficiency bonus. Your extra arms can’t wield weapons or shields or do anything that requires manual precision, such as using tools or magic items or performing the somatic components of a spell.

Evos Physiology. You are immune to the petrified condition.

Languages. You can speak, read, and write Common and Evos. Evos is a musical language that reminds terran listeners of a mix of wind chime and trumpet sounds.

Your synthetic character has certain characteristics in common with all other synthetics.

Ability Score Increase. Your Intelligence score increases by 2, and two other ability scores of your choice increase by 1.

Age. A typical synthetic is between two and thirty years old. The maximum lifespan of a synthetic remains a mystery as they do not seem to be affected by old age.

Size. Synthetics are the same size as humans, ranging from 5 to 6 feet tall. Your size is Medium.

Darkvision. Thanks to your manufactured eyes, you have superior vision in dark and dim conditions. You can see in dim light within 60 feet of you as if it were bright light, and in darkness as if it were dim light. You can’t discern color in darkness, only shades of gray.

Synthetic Resilience. You were created to have remarkable fortitude, represented by the following benefits:

Recharge State. When you take a long rest, you must spend at least six hours of it in an inactive, motionless state, rather than sleeping. In this state, you appear inert, but it doesn’t render you unconscious, and you can see and hear as normal.

Languages. You can speak, read, and write Common and one other language of your choice.