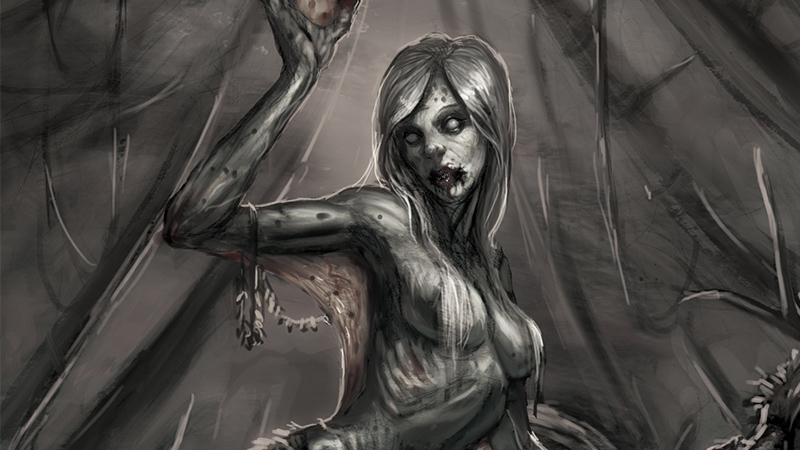 Hideous creatures draped in the pleasing skin of a familiar companion, bog hags are vile shapechangers that prey on humans.

Bog hags thrive in the fetid swamps and waterways of the Realms. Though they originate in the Shadowfell, they are at their deadliest on the Prime Material, where no one suspects their presence. A bog hag’s natural form is that of a loathsome green crone with sharp nails and jagged teeth. It stands about 6 feet tall and weighs 100 pounds on average. It thrives by stealing the skin of human victims, wearing the skin like a suit, altering its shape to match, and even masquerading as the victim for short stretches of time.

How do bog hags fight?

Bog hags stake out a territory in a given body of water near a human community and wait for potential victims to approach the water. A bog hag rarely attacks unless its victim is alone, in which cats it swims up behind its prey and attacks in the water. Usually, it grapples its target first, then attempts to drown it in the water.

Skinsuit. The bog hag magically transforms its appearance to look like a humanoid whom it has killed and whose skin it wears. Its statistics, other than its size, are the same.  The skinsuit rots and is destroyed in one week unless a gentle repose or similar magic is cast upon it.

Claws. Melee Weapon Attack: +3 to hit, reach 5 ft., one target. Hit: 4 (1d6 + 1 slashing damage. If the target is a creature, it must make a DC 12 Constitution saving throw or contract bog rot disease. The diseased target can’t regain hit points, and it its Constitution score is reduced by 1d4 for every 24 hours that elapse. If the disease reduces the targets’ hit point maximum to 0, the target dies. The disease last until removed by lesser restoration or similar magic.