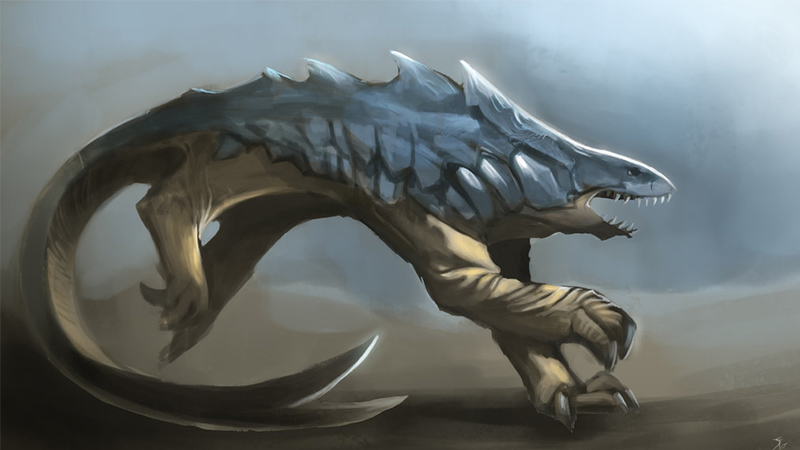 Welcome back to Dave’s Daily Monsters. I’ve been making my way through the Monster Manual each day offering 3-5 variants of each monster. Today, I’m just a couple steps away from wrapping up the B’s with the classic D&D monster bulette.

Here’s what to expect in this article:

What is a bulette?

Way, way back during the Chainmail days of D&D, Gary Gygax needed inspiration for new monsters to torment the game’s players. Most of his monster ideas he got from old pulp fiction and swords and sorcery stories. However, one legend purports that Gary was in a toy store and saw a bag of cheap Japanese monster figures. In that collection were the models for what would soon become three famous D&D monsters: the rust monster, owlbear, and bulette.

The bulette, or land shark as it’s sometimes called, is a heavily scaled monster that’s like a cross between an armadillo, a snapping turtle, and a heavy duty mining drill. They’ve appeared in every edition of D&D in some form or another.

Here’s what they looked like way back in first edition:

Bulettes are monstrosities with super low Intelligence. So basically they’re driven by basic animal instincts: eat, mate, and “get outta my house!” The fluff says that most things avoid bulettes when they come around. Not surprising. At challenge rating 5, there’s not a whole lot beyond 2nd tier adventurers or better that can take these guys out.  Challenge rating 5 probably means they’re pretty rare, too. Otherwise, they’d probably destroy, like… everything.

Probably has a lot to do with their mating why they’re so rare. Mating season ain’t pretty for bulettes. Lots of biting, scratching, and occasionally death (mostly for the males, womp womp). And being that they’re so hungry–and not opposed to eating bulette meat themselves–I’m guessing they lay eggs and scram. Otherwise, a hungry bulette is going to see its own young as hors d’oeuvres.

How do 5e bulettes fight?

Keith Ammann has a pretty good article on the nature of beasts and monstrosities (and just about everything else). Here’s what he says about those guys:

Beasts and monstrosities are easily grouped together, because their priorities are simple: They want food. Also, perhaps, territory, but territory is mainly a way to ensure uncontested access to food, along with individual survival. Monstrosities tend to have animal-level intelligence, although there are a handful of exceptions, notably krakens, sphinxes, nagas, lamias and certain types of yuan-ti. Even these exceptions, I think, will possess an animal-like instinct to establish and defend territory, despite coming up with more sophisticated rationalizations of this behavior.

At Intelligence 2, bulettes are about as dumb as they get, only a slight step above oozes. There are no real tactics for these guys. They just utilize their evolutionary advantages to the best of their ability. Let’s look at their advantages:

They’ve got darkvision and tremorsense out to 60 ft. and great Perception, too. That probably means they’re nocturnal hunters. This makes sense from the fluff, too, because they’re not fans of elves or dwarves who can see in the dark, but loooove the taste of darkvisionless halfling flesh. I’m sure they won’t pass over a human, either.

Creatures with bestial level intelligence are always going to be one-trick ponies with their attacks. For bulettes, the tactics are simple: use their tremorsense to find prey. Get close enough to where it can jump out with at least 15 feet between it and its targets. Then use its Deadly Leap action to “cannonball!!!” onto a group of yum-yums.

From there, it’ll either regroup and do this again, or if it’s knocked an easy target down it’ll gobble it up and return to whence it came. It doesn’t have a natural grapple/swallow combo with its bite, so it probably won’t drag victims off. It’s looking to dine and dash.

Again, because Bulettes have lousy Intelligence, they have no real way of knowing what’s tough or what’s not until they’re in the thick of it. But they are probably clever enough to realize that easy food is good food. So bye-bye squishy spellslingers and small guys with low-to-no armor.

Finally, they have average Wisdom, so if they’re dropped to 40% of their hit points or less, they’re going to get the hell out of there. Dumb or not, no meal’s worth dying for.

What 5e bulette variants are needed?

Beasts and monstrosities are the easiest variants to cook up. Simply create a lesser baby version and a greater big daddy/mama monster version and presto: you’re done. Instead of just cooking up monsters, I thought that for this article, I’ll start off with showing you how you can do that pretty quickly. Then I’ll create two examples using the bulette as the base creature.

How to create a “lesser” beast or monstrosity.

Creating a lesser beast or monstrosity is easy since all you have to do is reduce the base creature’s stats and attacks. I’m goign to outline the steps, then show you an example with the finished bulette pup.

Pups are born like nine-banded armadillos; they come in groups of four identical babies. Unlike armadillos, however, they hatch from eggs. Chances are they’re abandoned, too, buried under loose soil. The mother, driven by her insatiable hunger, won’t feel like waiting around for these to hatch. Once hatched, only a couple of the pups survive the nest as the strongest bulettes eat its weaker brothers and sisters first. That’s why over time bulettes get stronger and stronger thanks to natural selection.

Here’s how to create a lesser monstrosity. It’s best to do it with a beast or monstrosity that has an intelligence score of 6 or less.

Here’s an example of a lesser monstrosity using these rules.

As usual, these monsters are free for you to use in your own fifth edition Dungeons & Dragons games. Just not commercially. And the art isn’t mine… borrowed!

And that’s it. Note, you may want to make adjustments to your new creature with what makes sense to you. For example, I might increase the bulette pup’s tremorsense back up to 60 ft. Always be sure to playtest your creations to see what works and what doesn’t.

How to create a “greater” beast or monstrosity.

Creating a greater beast or monstrosity is a bit trickier mostly because it involves more creativity on your part. Regardless, here’s the rules I use when creating greater beasts and monstrosities.

This time, you’ll want to pick a beast or monstrosity that is Huge or smaller. I’ll be statting up a bulette village eater as my greater monstrosity. Bulette village eaters are rare and stay hidden, but when they appear, chaos abounds. These monstrosities have near unlimited hunger, and are capable of eating entire hamlets in just under an hour.

Here’s an example of a greater monstrosity using the rules from above:

Deadly Leap. If the bulette jumps at least 15 as part of its movement, it can then use this action to land on its feet in a space that contains one or more other creatures. Each of those creatures must succeed on a DC 20 Strength or Dexterity saving throw (target’s choice) or be knocked prone and take 20 (4d6 + 6) bludgeoning damage plus 20 (4d6 +4) slashing damage. On a successful save, the creature takes only half the damage, isn’t knocked prone, and is pushed 5 feet out of the bulette’s space into an unoccupied space of the creature’s choice. If no unoccupied space is within range, the creature instead falls prone in the bulette’s space.

As you can see, I also added in siege monster to this bulette’s special traits because I felt it made sense with the beast.

Always be sure to tweak and adjust your monsters until they make sense to you. And definitely make sure to playtest your greater variants as they will tend to have new abilities that can greater change the dynamic of the original monster.

Hopefully this quick guide to creating lesser and greater beasts and monstrosities has helped you with some monster creations of your own.

From here, I plan on creating greater and lesser versions of all the beasts and monstrosities in the Monster Manual and packaging it together in a book for you to download, so stay tuned.

Also, to make damage easier, I’ll probably investigate beast and monstrosity attacks, how damage is related to size, and beyond.

Next up I’ll be tackling bullywugs!