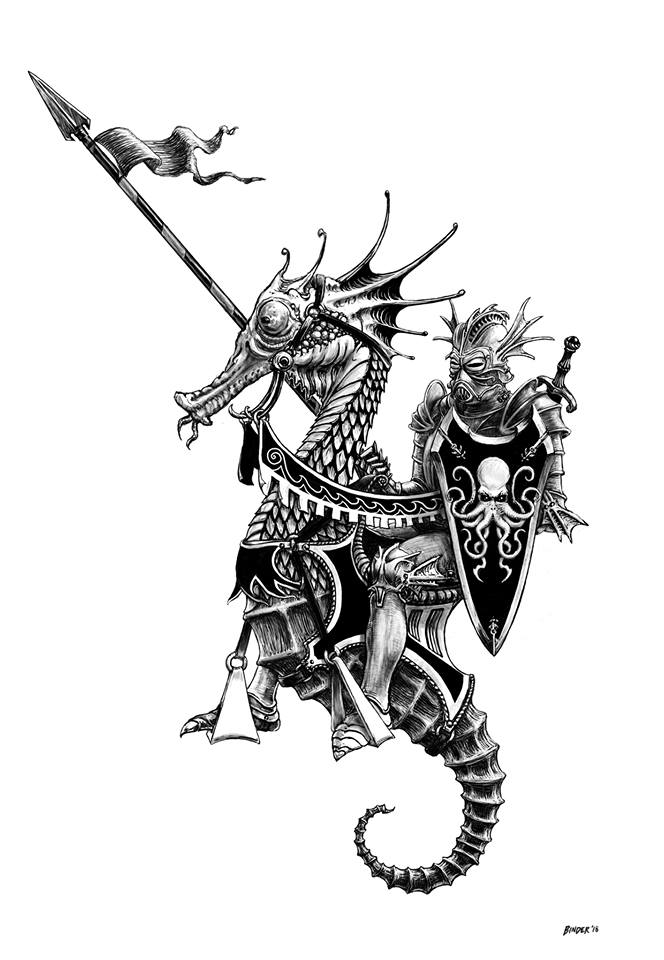 DM DaveLeave a Comment on Stat Anything: Seahorse Knight for 5e D&DPosted in Fun Stuff

Continuing my stat anything series, I got a request from Instagram follower and outstanding fantasy artist Jared Binder (@soulswordstudio). You can check out his fantastic work on Instagram or on his Facebook page: Fantasy Art and Illustration of Jared Binder.

Jared requested his creation, the Seahorse Knight. And I thought it looked pretty fun! Here’s the full image below:

Unlike some of the other suggestions I’ve done, I don’t know much more about this guy other than a) he’s riding a sea horse and b) he’s a knight. Jared had this to say about his creation:

The Seahorse Knight, inspired by the classic Dragon Magazine issue #83 cover art by Denis Beauvais… a tattoo design for a friend.

So checking out Dragon Magazine issue #83, I found this:

Pretty bizarre setup here! It’s like a fantasy chess game and clearly black is winning. Also, what’s up with the city and wizard face looming in the background?

Anyways, on to our sea horse knight. I don’t want to make him a chess piece (that’d basically be a Medium construct that can only move in ‘L’ patterns which would be weird), but instead give him a little more back story.

Who is the sea horse knight?

Here’s what we can discern from Jared’s image:

Okay, let’s first tackle the easy part: the sea horse. Fortunately, the Monster Manual already has a litsing for a giant sea horse (p328). The fluff for the giant sea horse states:

Like their smaller kin, giant sea horses are shy, colorful fish with elongated bodies and curled tails. Aquatic elves train them as mounts.

Now we know that they’re shy and that Aquatic elves ride them.

That’s good news, because aquatic elves are actually outlined in Mordenkainen’s Tome of Foes a playable elf variant! According to MToF, sea elves have all the same features as elves plus hardier Constitution and proficiency with spear, trident, light crossbow, and net. They’re children of the sea, so they have a swimming speed of 30 feet and can breathe air and water. Plus, they can communicate simple ideas to anything that also has a swimming speed. Finally, they speak, read, and write Aquan.

But what does it mean to be a knight? Fortunately, the Monster Manual answers that question with the knight NPC (p347).

I think we’ve got plenty to go on here!

This Dungeons & Dragons fifth edition monster is free for you to use in your campaigns. Just not commercially! And the art isn’t mine, it’s Jared Binder’s, so you’ll have to hit him up!

Amphibious. The knight can breathe air and water.

Brave. The knight has advantage on saving throws against being frightened.

Fey Ancestry. The knight has advantage on saving throws against being charmed, and magic can’t put the knight to sleep.

Friend of the Sea. Using gestures and sounds, the knight can communicate simple ideas with any beast that has an innate swimming speed.

Leadership (Recharges after a Short or Long Rest). For 1 minute, the knight can utter a special command or warning whenever a nonhostile creature that it can see within 30 feet of it makes an attack roll or a saving throw. The creature can add a d4 to its roll provided it can hear and understand the knight. A creature can benefit from only one Leadership die at a time. The effect ends if the knight is incapacitated.

Parry. The knight adds 2 to its AC against one melee attack that would hit it. To do so, the knight must see the attacker and be wielding a melee weapon.

This was a pretty fun entry on Stat Anything and I’m really blown away by Jared’s awesome work. If you’re looking for someone to design your next tattoo or bring your PC to life, this is the guy to do it.

Next up I’ll be statting up the monsters from A Quiet Place. That’s going to be a doozy!