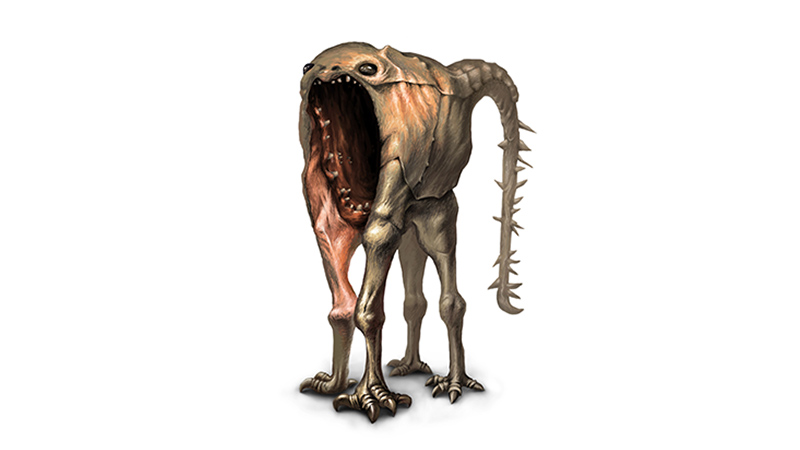 Chukchuls, also known as astral devourers, are horrible aberrations that lurk among the petrified god-corpses of the Astral Plane. Sapping astral travelers of their mental energy, these beasts wrap their massive maws around the heads and shoulders of their prey, leaving nothing more than a catatonic husk.

Despite their bestial intelligence, chukchuls appear to have adapted to the astral and can maneuver in the zero gravity environment almost as well as the gith. They use their oddly positioned legs to leap among the debris and rare motes of the Astral Sea.

There have been reports of chukchuls finding their way into the Prime Material. While their leaping ability is certainly limited there, they are still fierce predators and their hunger for mental powers remain the same.

Although they do not seem to possess the same pack mentality of Prime Material beasts, they have been known to travel in large groups. These chukchul clusters (as they are known) cover entire motes like a plague of insects, patiently waiting for passersby to leap upon. Even when they’re away from a mote or something else to leap from, the chukchuls use each other to leap off of, increasing their speed like a rolling ball of chaos, a true terror to any unfortunate soul that comes across one.

Cluster Movement. While on the Astral Plane and within 30 feet of another chukchul, the chukchul’s movement speed increases by 10 feet.

Bite. Melee Weapon Attack: +3 to hit, reach 5 ft., one target. Hit: 3 (1d4 + 1) bludgeoning damage, and the target is grappled (escape DC 11) if it is a Medium or smaller creature. Until this grapple ends, the target is restrained and blinded, and the chukchul can’t use its bite attack on another target.

Brain Drain. The chukchul attempts to absorb the mental energy of one creature it is grappling. The target must make a DC 11 Wisdom check or its Intelligence score is reduced by 1. The target dies if this reduces its Intelligence to 0. Otherwise, the reduction lasts until the target finishes a short or long rest.

The chukchul is the first Dungeons & Dragons Fifth Edition entry in a new book I’m working on for DMsguild.com titled, simply, CR 1/8.

It will be available for free download and read until the book is published (probably by the end of this week).

If you like the chukchul, then get the word out by sharing it. Click one of the buttons below.