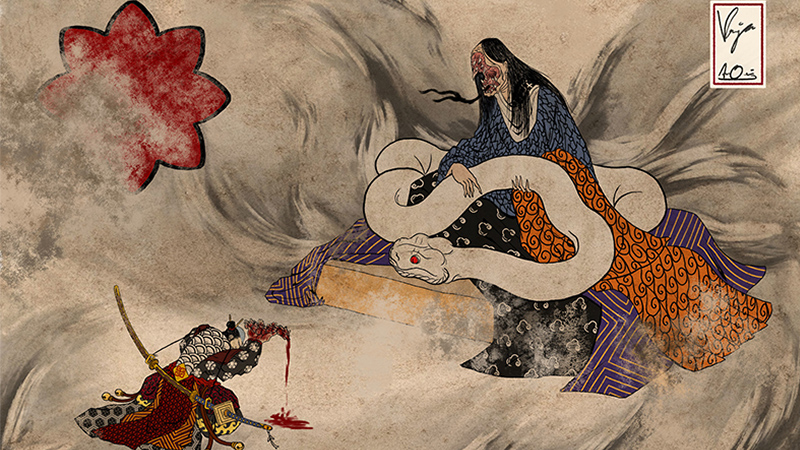 Hebi-no-onna are vain creatures who delight in the adoration or even worship of warped and deluded humanoids. Whether found as solitary murderers, powerful spellcasters with an entourage of slaves, or at the center of an entire cult network, hebi-no-onnas are dangerous foes whose evil knows no bounds.

A hebi-no-onna appears as an ordinary human woman, generally very attractive and attired like a wealthy noblewoman, in a kimono of the finest silk or linen. Her voluminous sleeves, however, hide arms that are writhing serpents, complete with venomous bites. Hebi-no-onnas love precious stones and drape themselves in jewelry beyond the limits of good taste.

Hebi-no-onnas prefer to use their hypnotic gaze on opponents, and cast spells if they are able, before entering into melee. They are more in love with themselves than with any of their plans or goals, so they never hesitate to flee from a fight that is going poorly for them, even if it means leaving valuable slaves to their deaths as they cover her retreat.

Legendary Resistance (3/Day). If the hebi-no-onna fails a saving throw, she can choose to succeed instead.

Snake Command. Normal snakes (Beasts only) always obey the commands of the hebi-no-onna, even to the death.

Spellcasting. The hebi-no-onna is a 14th-level spellcaster. Her spellcasting ability is Charisma (spell save DC 17, +9 to hit with spell attacks). She has the following sorcerer spells prepared:

Serpent Bite. Melee Weapon Attack: +6 to hit, reach 5 ft., one target. Hit: 9 (2d6 + 2) piercing damage plus 14 (4d6) poison damage. If the target is a creature, it must succeed on a DC 17 Wisdom saving throw or drop whatever it is holding and become frightened for 1 minute. While frightened by this effect, the creature is stunned. A creature can repeat this saving throw at the end of each of its turns, ending the effect on a success. If a creature’s saving throw is successful or the effect ends for its, the creature is immune to this effect for the next 24 hours.