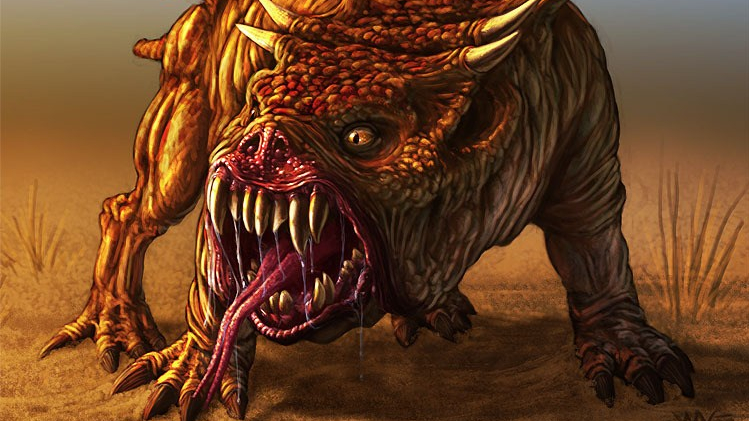 And so the ugly beasties from the Wanderer’s Journal conversion continues, this time with Athasian Giants, Athasian Gith, Jozhal, Silk Wyrms, and Tembos.

Humanoid giants resemble massive humans standing between 20 and 30 feet tall, and weighing between four and eight tons. They have exaggerated and sometimes comical features, such as huge noses, ears, mouths, and so forth. Their skin is usually dark red to
black in color, and their hair is coarse and sturdy (giant hair ropes are the best on Athas).

Beast-headed giants resemble humanoid giants in many respects, save that they are slightly smaller (15-20 feet). In place of the head of a man or woman, they have the head of some beast, and their skin is usually an extremely pale color, like pink or alabaster. Beast-headed giants are rarely seen in the Tablelands, for they are just short enough
to make wading through the Sea of Silt hazardous to their safety.

Generally, humanoid giants are only destructive when they want something, or when a stranger has landed on their island uninvited. Otherwise, they are quite congenial and friendly.

Beast-headed giants tend to be more hostile and treat all non-giants as vermin. They are magical mutations of normal giants and are treated by their brethren as inferior beings. Since beast-headed giants are on the whole somewhat wiser and more intelligent than humanoid giants, this makes them understandably bitter.

Most giants feed themselves through herding sheep, kanks, erdlus, and other animals. They often supplement this simple lifestyle through raiding, simple forms of commerce (such as by selling their hair to rope-makers), and occasionally by hiring themselves out as mercenaries (though this is considered quite dishonorable by most giants).

Psionics Immunity. The giant is immune to all psionics powers and effects.

Greatclub. Melee Weapon Attack: +11 to hit, reach 10 ft., one target. Hit: 20 (3d8 + 7) bludgeoning damage, and the if the target is a Medium or smaller creature it must make a DC 19 Strength saving throw or be pushed back 15 feet and knocked prone.

A beast-headed giant is a normal Athasian giant. However, it has the following trait:

The gith are a race of grotesque humanoids that appear to be a peculiar mixture of elf and reptile. They are extremely gaunt and lanky, with long dangling arms and spindly legs. Their hands have three fingers with no opposable thumb, yet they are able to use tools and wield weapons. Both their fingers and toes end in sharp claws.

If one could get a gith to stand up straight, he would measure close to seven feet tall. However, most gith appear to be no more than five feet tall, for they stand hunched over at the shoulders.

If possible, the gith attack in mass, usually starting with a psionic attack from one of their leaders. Then the entire party moves in quickly to melee. They often accomplish this by springing up to twenty feet in one giant leap to close with their enemies.

The gith live in tribal organizations. The individual with the most powerful psionics generally acts as the leader. All other social positions are distributed at his pleasure.

Mountain gith live in underground lairs, claiming a particular canyon or valley as their territory. Gith inhabiting the Tablelands tend to organize their society more along the lines of a nomadic hunting clan, going wherever the game takes them. They do not hesitate to attack human or demihuman groups.

Innate Spellcasting (Psionics). The gith’s innate spellcasting ability is Wisdom. It can innately cast the following spells, requiring no components:

Innate Spellcasting (Psionics). The gith’s innate spellcasting ability is Wisdom (spell save DC 12). It can innately cast the following spells, requiring no components:

Mental Defenses. The gith is immune to any effect that would sense its emotions or read its thoughts, including divination spells. Even wish spells and spells or effects of similar power cannot affect the gith’s mind or gain information about it.

Mind Blast (Recharge 5-6). The gith magically emits psychic energy in a 60-foot cone. Each creature in that area must succeed on a DC 12 Intelligence saving throw or take 15 (3d8 + 2) psychic damage and be stunned until the start of the gith’s next turn.

Standing about four feet tall, the jozhal is a small, two-legged reptile with a skinny tail, a long flexible neck, and a narrow, elongated snout. Its mouth is filled with needle-sharp teeth, and its lanky arms end in small, three-fingered hands with an opposable thumb.

Although the jozhal’s hide is covered with scales, they are so small as to be unnoticeable at first, and it appears to more akin to a man’s skin or a baazrag’s rough hide. The jozhal can change the hue of its skin at will, either to match the color of its environment or to
stand out against it.

Generally, the jozhal prefers to avoid combat. It attempts to flee, then uses its ability to change skin color to hide from pursuers.

Should the pursuer get too close to the jozhal without actually seeing it, the jozhal will attack. During the actual fight, the jozhal attempts to defend itself first with psionics and magic, then with any magical items it currently possesses. If that fails, it will bite with its teeth.

The jozhal live in small family groups of four to five creatures. They are extremely intelligent and cunning, but regard humans or demihumans as foolish, dangerous creatures and will rarely tolerate them.

Jozhals are attracted to magic of all sorts, and whenever they see humans or demihumans passing they track the party down and attempt to cast a detect magic spell on the group. If the spell reveals any magical items, they will try to sneak into camp and steal them.

Jozhals forage for food (roots and tubers) and eat almost any sort of small reptile, snake, or insect. Their magic is akin to that of elemental clerics and is therefore not destructive to the environment around them.

The jozhal clans intellect is best reflect in its relationship to the world around it. They are very careful never to destroy the lifegiving world in which they live, always making use of every bit of scrap and refuse that they find. They carry this to extremes, even practicing cannibalism and using the bones of their dead to construct weapons and tools.

Innate Spellcasting (Psionics). The jozhal’s innate spellcasting ability is Wisdom (save DC 11). It can innately cast the following spells, requiring no components:

Spellcasting. The jozhal is a 5th-level spellcaster. Its spellcasting ability is Wisdom (spell save DC 11, +3 to hit with spell attacks). The jozhal has the following cleric spells prepared:

Camouflage Skin. As a bonus action, the jozhal can change its skin to perfectly match its surroundings. While camouflaged, the jozhal has advantage on Dexterity (Stealth) checks.

The silk wyrm is a snake with a hard, chitinous shell that measures over 50′ in length. They are commonly seen flying through the air during the day searching for prey but rarely attack until dusk when they assume their shadow form and sneak into a camp
to attack.

The silk wyrm will drag its paralyzed prey away and encase it in a sheath of silk, inside which the unfortunate victim will linger for up to two weeks. During this time, the silk wyrm will occasionally stick its head into the protective cocoon and bite the victim’s neck, draining a little bit of blood and paralyzing it again.

The silk casing manufactured by the silk wyrm is valued in many cities for use in expensive clothing. It is flame resistant ( +4 bonus on any saves vs. normal fires, +2 bonus vs. magical fires) and very tough. Cutting a captured victim free can be quite time-consuming.

Bite. Melee Weapon Attack: +4 to hit, reach 10 ft., one target. Hit: 11 (2d6 + 4) piercing damage and the target must make a DC 12 Constitution saving throw. On a failed saving throw, the target is paralyzed until the end of its next turn when it must repeat its saving throw again. On a success, the effect ends. On a failure, the creature is paralyzed for one week until freed by the lesser restoration spell or other magic. While paralyzed, the creature is alert and aware of its surroundings and can use any psionics powers it has.

The tembo is a despicable, furless, tawny-colored beast covered with loose folds of scaly hide. Varying between three and six feet in length, they usually stand about as high as a man’s thigh. All four of their lithe feet end in long sharp claws, and huge canine fangs
protrude from beneath the flappy lips of their squarish snouts. The tembo has huge, squarish ears which it can turn in any direction, independently of each other.

Though all tembo love to fight, their battle tactics are as unpredictable as these vicious beasts themselves. Some attack by stealth from a short distance away, sneaking as close as possible to their victims and trying to destroy them with a death field. Others prefer to play with their victims, batting them from one paw to another, using life draining each time the paw lands. Still, other tembos like to leap into the fray immediately, meleeing their victims from the first round.

Tembo display no fear, and will always fight to the death rather than run.

Tembo prowl the desert in small packs that seem to have no real social organization or cohesiveness. Each tembo does more or less as it pleases, not sharing any prey it downs with the others. The tembo’s one concession to social life is that if one of them is attacked, the entire pack will join to fight the enemy.

The favorite food of the tembo is the young of any other race. Tembo are famous for sneaking into nomadic camps to drag off elven children, for skulking about dwarven villages prowling for untended toddlers, even for sneaking into populated cities to snatch
noble babes from their cradles. Needless to say, this makes these despicable beasts universal objects of hatred. Even feuding elf tribes, the most dedicated of enemies, have been known to call a truce for the purposing of hunting down a tembo pack that has
appeared in the area.

Keen Hearing and Smell. The tembo has advantage on Wisdom (Perception) checks that rely on hearing or smell.

Missile Avoidance. Ranged weapon attacks targeting the tembo are made with disadvantage.

Multiattack. The tembo makes five attacks: four with its claws and one with its bite.

Bite. Melee Weapon Attack: +6 to hit, reach 5 ft., one target. Hit: 8 (1d8 + 4) piercing damage and the target must succeed on a DC 13 Constitution saving throw or its hit point maximum is reduced by an amount equal to the damage taken. This reduction lasts until the target finishes a long rest. The target dies if this effect reduces its hit point maximum to 0.

Death Field (1/Day). The tembo emits a magical field of psychic energy. Each creature within 30 feet of the tembo must make a DC 15 Constitution saving throw, taking 21 (6d6) necrotic damage on a failed saving throw, or half as much damage on a successful one.

Next: Household and Herd Animals of Athas