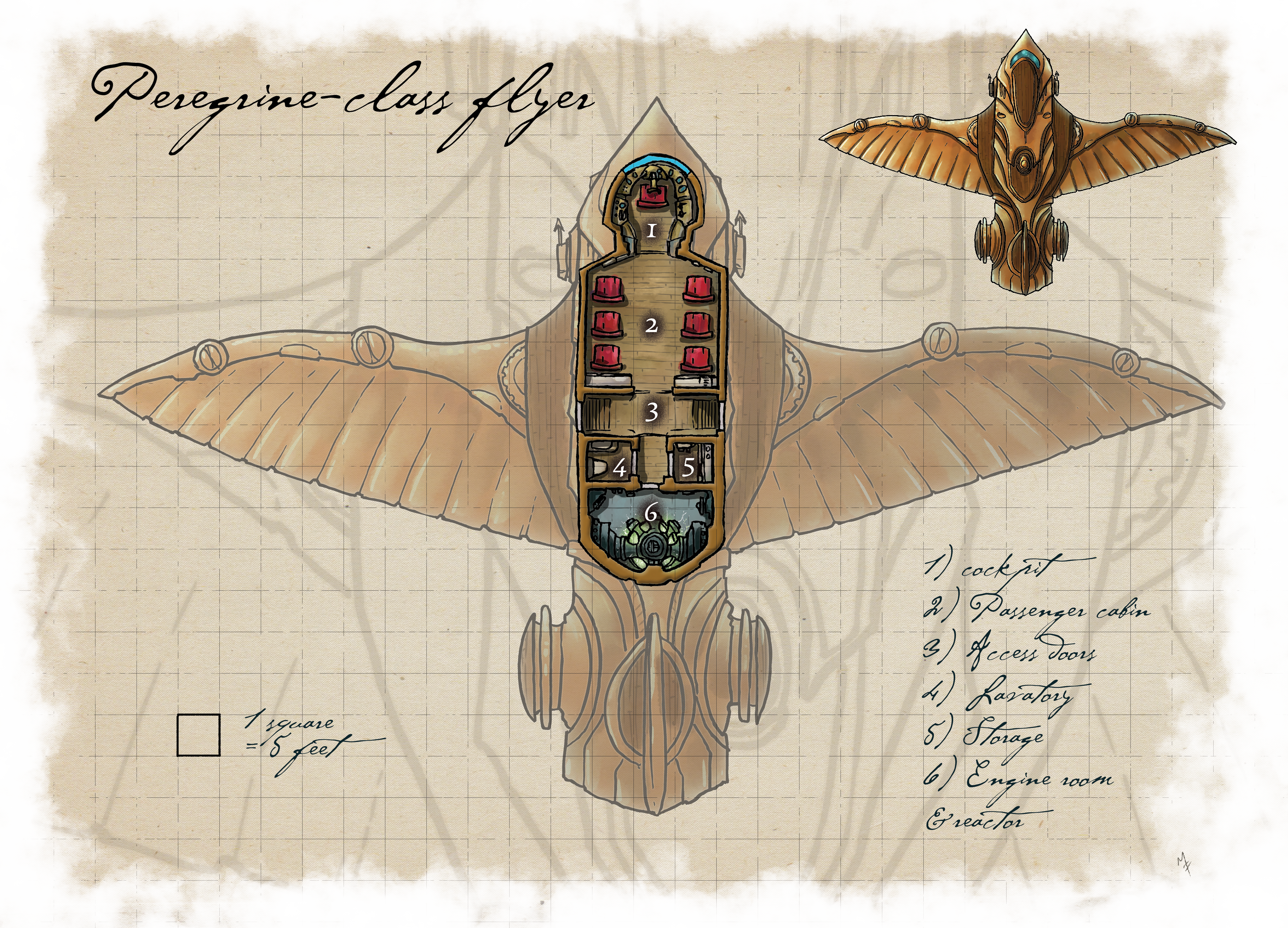 A Peregrine-class flyer has the following features:

Ceilings. The ceilings in the fuselage and cabin are 8 feet high with 6-foot-high doorways.

Doors. The flyer’s doors are made of wood and have AC 15, 18 hit points, and immunity to poison and psychic damage. A lock can be picked with a successful DC 15 Dexterity check made using thieves’ tools, or the door can be forced open with a successful DC 20 Strength (Athletics) check. The controls at the front of the flyer can raise or lower the doors.

Light. The interior of the flyer is illuminated by permanent light spells powered by the flyer’s emerald engine. The flyer also has exterior lights that can create a beam of bright light in a 120-foot cone and dim light for another 120-feet.

The cabin holds six chairs which can recline, allowing a passenger to rest comfortably in the chair. Each chair has a cubby of nourishment set into the armrest. The cubby generates a soft, flavorless food tablet that dissolves on your tongue and provides as much nourishment as 1 day of rations and one pint of cold drinking water. Once the cubby generates a food tablet, it can’t do so again for 8 hours.

At both the east and west sides of the flyer’s entry, two access doors lower allowing creatures to enter the flyer.

A soft, padded bench with a hole carved in the center fills this room. Below the bench is a chamber pot with a portable hole in its bottom. As soon as waste passes into the chamberpot, and a creature exits through the lavatory door, a prestidigitation spell is cast on the user to clean them and remove any unpleasant odors.

The storage locker is protected by an iron door and has AC 19, 18 points, and immunity to poison and psychic damage. Often, weapons and magic items are stored here.

The engine room has the following features:

Emerald Reactor. The flyer is powered by a Quickshroud 1.87 dl emerald reactor.

Tool Chests. The room includes two tool chests. Both chests act as bags of holding, containing enough tools and spare parts to completely rebuild the ship almost from the ground up. The only irreplaceable object is the ship’s Emerald Odonburgite crystal.

It only takes one crew to fly a Peregrine-class flyer, a pilot. Often the pilot is a mage with a background proficiency in Arcana and Vehicles (air).

On its turn, the flyer can take 2 actions, choosing from the options below. It can’t take actions if it has no crew.

Fire Eldritch Cannons. The flyer can fire its eldritch cannons.

Move. The flyer can use its helm to move with its wings.

APE Move (Costs 2 Actions). The flyer can use its helm to move with its arc-propulsion engine.

Move up to the speed of one of the flyer’s movement components. If the helm is destroyed, the flyer can’t fire its eldritch cannons.