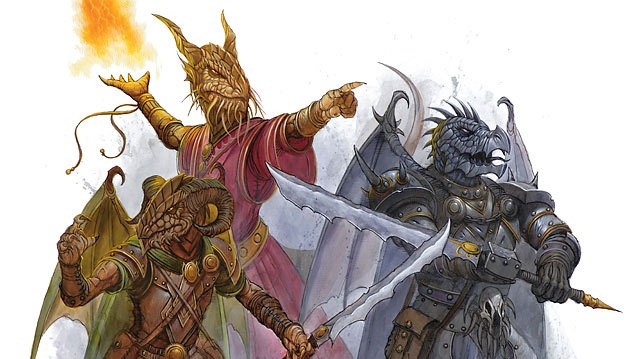 Another request I’m working on this evening, Draconians for Dungeons & Dragons Fifth Edition. Here’s what was requested:

Could you do a Draconian Race for a playable character? I’ve seen other’s do it for monsters, but it’s not what I’m looking for. Maybe have the race be Draconian with separate subraces for each type?

Challenge accepted! Of course, the first thing I’d point out is that stylistically, Draconians probably aren’t too different from dragonborn. In fact, on page 34 of the PHB, you can read all about draconians (the little green note box in the top right corner). Dragonlance lore that gives us some new ideas.

I found this cool post from the Dragonlance Wiki:

Created in order to fill the ranks of the dragonarmies of the Dark Queen Takhisis, the generals of the dragonarmies generally used draconians as shock troops. They are not natural creatures of Krynn. They were created from the eggs of metallic dragons using dark magic called the corruption ritual. These rituals were carried out by Dracart, a wizard of the Black Robes, WyrIlish, a priest of Takhisis, and Harkiel, a dark-hearted red dragon. One egg yielded dozens of young draconians. depending on the color of the dragon egg the draconian can be one of 5 types: Aurak, Baaz, Bozak, Kapak, and Sivak.

So already, that makes a big difference with our Draconian subrace.

You are a draconian, created from the egg of metallic dragons using dark magic called the corruption ritual.

Age. Young draconians grow quickly. Most walk within hours of hatching, quickling amassing the size and development of a 10-year-old human by the age of 3. Draconians reach adulthood by 15 and can live to be around 80.

Size. Draconians are taller and heavier than humans, standing over 6 feet tall and weighing 250 pounds or more. Your size is Medium.

Gliding Wings. As a draconian, you have a pair of leathery, vestigial wings that sprout from your back. While these are not capable of full flight, you can use them glide. You have a fly speed equal to your current walking speed. You fall if you end your turn in the air and nothing else is holding you aloft.

Languages. You can speak, read, and write Common and Draconic. Draconic is thought to be one of the oldest languages and is often used in the study of magic. The language sounds harsh to most other creatures and includes numerous hard consonants and sibilants.

Subrace. Five subraces of draconians are found among the worlds of Fifth Edition: auraks, baaz, bozaks, kapaks, and sivaks. Below, baaz and bozaks are detailed for you to play.

Baaz are the smallest of the draconians and hatched from brass dragon eggs they are used as ground troops in the dragon armies forces. The weakest of the draconians, baaz draconians are often abused and treated as slaves by others. However, their small size makes it easy for them to work in disguise and infiltrate the enemy. Additionally, the baaz can use their wings to intimidate their enemies. Baaz draconians turn to stone upon their deaths.

Intimidating Charge. You can flap your wings rapidly to increase your speed by 5 feet. While flapping your wings, if you move at least 10 feet straight toward a target, the target must immediately succeed on a Wisdom saving with a DC of 8 + your proficiency bonus + your Charisma modifier or become frightened by you until the end of its next turn. After you use your Intimidating Charge, you can’t use it again until you complete a short or long rest.

Damage Resistance. Thanks to your brass dragon ancestry, you have resistance against fire damage.

Created from the eggs of bronze dragons, bozak draconians are most well known for their leadership and understanding of warfare. In addition, they are gifted with magic. Bozak bones explode after death, injuring and potentially killing anyone near it.

Martial Expertise. Once per turn, whenever you hit a creature with a weapon attack and that creature is within 5 feet of one of your allies that isn’t incapacitated, you can reroll one of the damage dice. You must keep the new result.

Damage Resistance. Thanks to your bronze dragon ancestry, you have resistance against lightning damage.

Want this in PDF with three more subraces?

I’ve included the other subraces for draconians as well as the optional rules for their death throes in the PDF form on Patreon. For as little as $3 per month, you can get access to all the PDFs that I create for Fifth Edition.

Become a Patron today and get this PDF plus rules for aurak, kapaks, and sivaks, plus optional rules for death throes!

If you haven’t already heard, we’re offering a FREE Fifth Edition adventure (including 18-pages, 26 areas, 6 new monsters, and 2 new magic items) for you to download and keep as your own.

It’s part of the MASSIVE Forsaken Peak megadelve that myself and Justin David Russell are working on.

Download The Secret of Forsaken Peak Part 1: The Goblin Mine now.