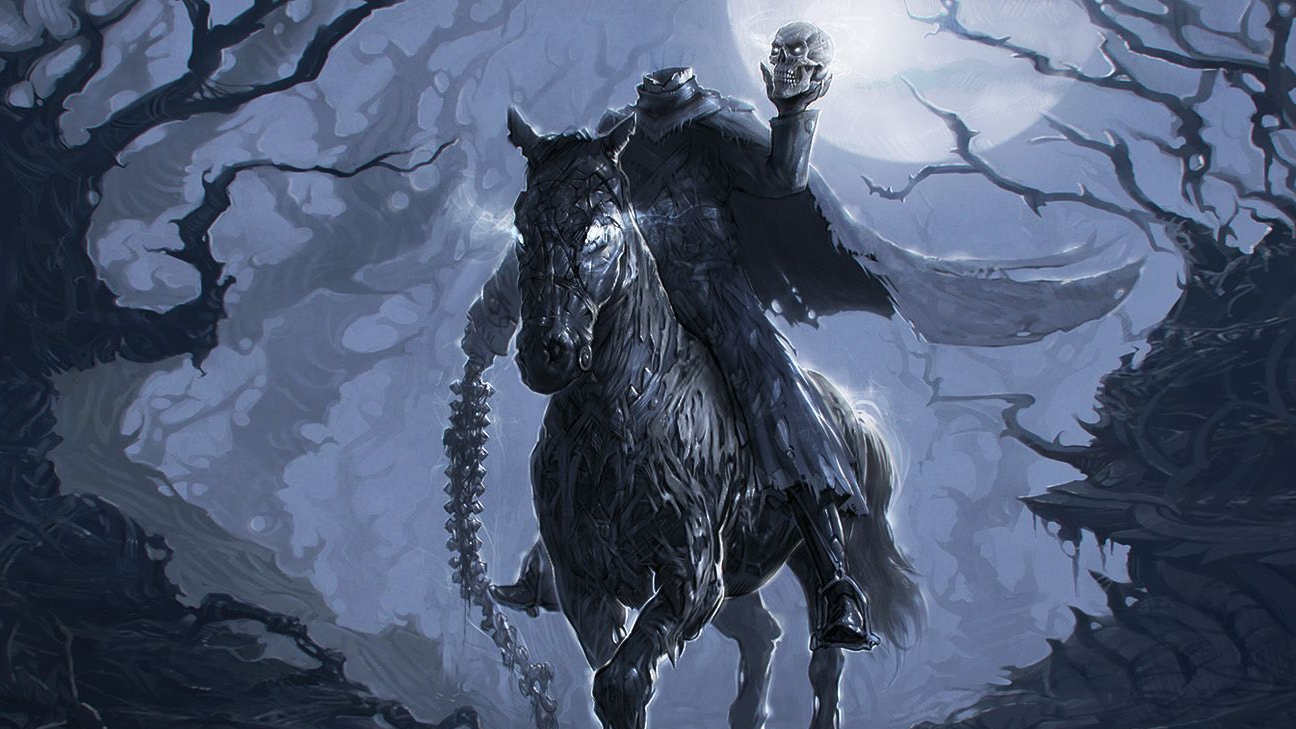 “The Dullahan is depicted as a headless rider, usually on a black horse, who carries their own head under one arm. Usually, the Dullahan is male, but there are some female versions. The mouth is usually in a hideous grin that touches both sides of the head. Its eyes are constantly moving about and can see across the countryside even during the darkest nights. The flesh of the head is said to have the color and consistency of moldy cheese. The Dullahan is believed to use the spine of a human corpse for a whip, and its wagon is adorned with funeral objects: it has candles in skulls to light the way, the spokes of the wheels are made from thigh bones, and the wagon’s covering is made from a worm-chewed pall or dried human skin. The ancient Irish believed that where the Dullahan stops riding, a person is due to die. The Dullahan calls out the person’s name, drawing away the soul of his victim, at which point the person immediately drops dead.

“There are rumors that golden objects can force the Dullahan to disappear.” (Source: Wikipedia – Dullahan).

Dullahan’s Mount. The dullahan rides a nightmare, warhorse skeleton, or ghoulish steed. The ghoulish steed uses the same stat block as a warhorse, but its type is undead, and it is immune to poison as well as the exhaustion and poisoned conditions.

Undead Nature. The dullahan does not require air, food, drink, or sleep.

Damage Immunities poison; bludgeoning, piercing, and slashing from nonmagical weapons not made with golden weapons

Severed Head. The dullahan carries around its own severed head. If it drops its head or its head is stolen, the dullahan is blind and deafened until it regains it. The dullahan always knows the distance and location of its head as long as it is on the same plane of existence as the Dullahan.

Sunlight Sensitivity. While in sunlight, the dullahan has disadvantage on attack rolls, as well as on Wisdom (Perception) checks that rely on sight.

Turn Resistance. The dullahan has advantage on any saving throws against any effect that turns undead.

Multiattack. The dullahan makes two attacks with its bone whip.

The iconic headless horseman from the Legend of Sleepy Hollow can be created with a few minor changes. Remove the dullahan’s Severed Head trait and give the horseman blindsight to 120 ft. (blind beyond this radius). The headless horseman wields a spectral scimitar in place of a bone whip, and in place of its head, it holds a flaming pumpkin. It has the following additional action options: