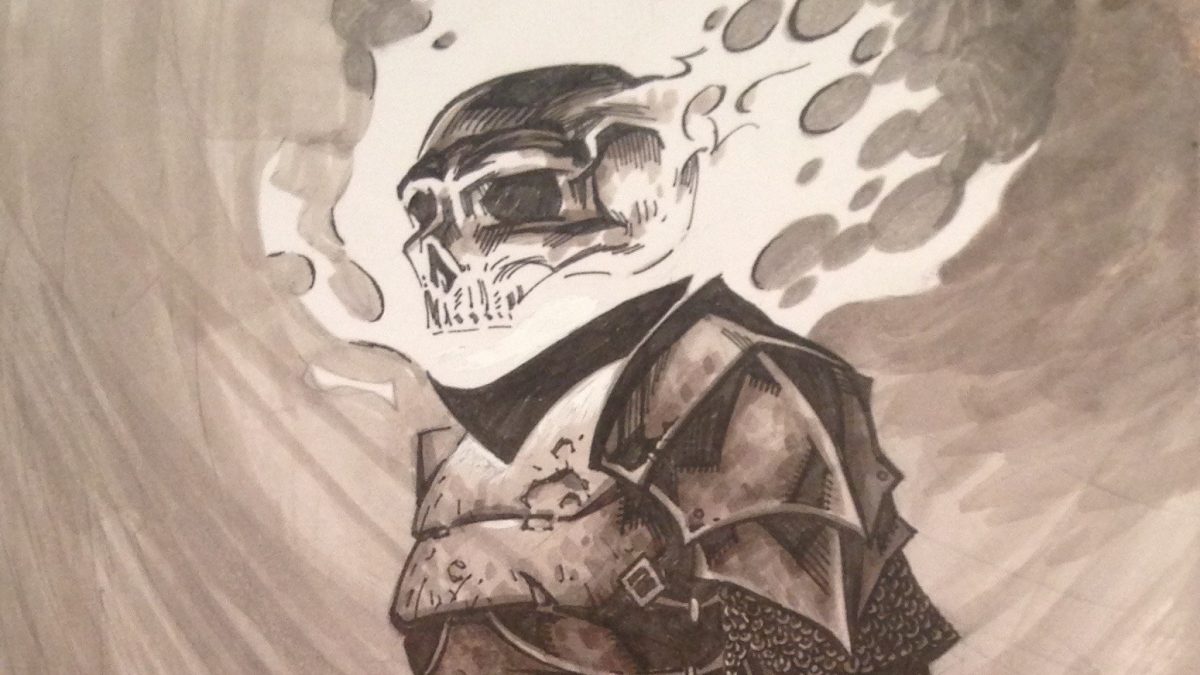 The Spirits of Vengeance were a team of benevolent beings who protected mankind during ancient times. Their exact origins are a mystery, as some have claimed that they were the vestiges of God’s power bonded to human hosts calling themselves Ghost Riders, while others have claimed them to be demons in the service of Mephisto. There have been different sorts of Spirits of Vengeance around the world based on each country’s customs, belief, and religion. Keeping them in charge was the archangel Zadkiel, whose sole purpose was to manipulate the Spirits’ true place of origin. (Source: Marvel Fandom).

At the GM’s discretion, your transformation level may also have certain in-game requirements such as the result of fulfilling a special request, or a curse put upon the character by a fiend of great power.

The Spirit of Vengeance

As a spirit of vengeance, you gain the following class features.

Hit Points at Higher Levels: 1d10 (or 6) + your Constitution modifier

*The chain whip is detailed at the end of this article.

On your turn, you can use your bonus action to transform into the Spirit of Vengeance. As you change, your skin melts away to only your skull and bones which burn unceasingly with hellfire. Any clothing or equipment you are carrying changes as well, taking on demonic embellishments such as extra spikes and chains.

While in your demonic form, you gain the following benefits:

If you are able to cast spells, you can’t cast them or concentrate on them while you are in your demonic form.

The demonic form lasts for 1 minute. It ends early if you end your turn with fewer than half your hit points remaining. You can also revert to your true form on your turn as a bonus action.

At you and your GM’s discretion, whenever you are within the presence of evil and aware of it, you must make a DC 13 Charisma saving throw. On a failed saving throw, you automatically change into your demonic form, and you can not willingly change back before the duration ends unless you destroy the source of evil that triggered your transformation.

Optional Rule: Drag Me to Hell

If the necrotic damage received from changing into your demonic form too many times reduces your maximum hit points below 0, you die and your soul is immediately transferred to the afterlife. Only a wish spell or divine intervention can bring you back to life.

While in your demonic form, you can force creatures to regret their past transgressions. As an action, you can target one creature within 15 feet of you. As long as the creature can see you, it must make a Wisdom saving throw with a DC of 8 + your proficiency bonus + your Charisma modifier. Non-evil creatures make this saving throw with advantage. On a failed saving throw, the creature takes 1d8 psychic damage and it is filled with overwhelming regret, leaving it able to use its action on its next turn only to take the Dodge, Disengage, or Hide action.

You can use this feature a number of times equal to your Charisma modifier (minimum of once). You regain all expended uses after you complete a long rest.

The presence of strong evil registers on your senses. As an action, you can open your awareness to detect such evil. Until the end of your next turn, you know the location of any celestial, fiend, or undead within 30 feet of you regardless of imposing barriers. You know the type of being whose presence you sense, but not its identity.

As you gain levels as a character, you continue to receive benefits from your Spirit of Vengeance transformation level at 5th level, 11th level, and 17th level.

At the 5th character level, you develop a bond with an animal that becomes your spirit’s mount.

With 8 hours of work and the expenditure of 50 gp worth of rare herbs and fine food, you call forth an animal to serve as your partner in vengeance. Choose a camel, donkey, mastiff, mule, or riding horse. You are free to choose another animal appropriate to the campaign setting at your GM’s discretion.

At the end of the 8 hours, your mount appears and gains all the benefits of your Mount’s Bond ability. You can have only one spirit’s mount at a time.

If your spirit’s mount is ever slain, the magical bond you share allows you to return it to life. With 8 hours of work and the expenditure of 25 gp worth of rare herbs and fine food, you call forth your mount’s spirit and use your infernal magic to create a new body for it. You can return a spirit’s mount to life in this manner even if you do not possess any part of its body.

If you use this ability to return a former spirit’s mount to life while you have a current spirit’s mount, your current mount leaves you and is replaced by the restored mount.

At 5th level, when you use your demonic transformation feature and you are within 30 feet of your spirit’s mount, the mount also transforms. While transformed, the mount gains the following benefits:

At 11th level, when you use your Penitent Stare trait, you regain hit points equal to half the psychic damage dealt.

Also at 11th level, your mount gains a special attack while both you and it are in your demonic forms. As an action, you can command your mount to use its reaction to breathe fire in a 30-foot cone. Each creature in the area must succeed on a Dexterity saving throw with a DC of 8 + your proficiency bonus + your Charisma modifier. A target takes 8d6 fire damage on a failed saving throw, or half as much damage on a successful one. Flammable objects in the area not being worn or carried ignite.

Starting at 17th level, while you are in your demonic form, you have advantage on saving throws against spells and magical effects.

At 17th level, while you and your mount are in your demonic forms, you can cast the teleport spell, targeting only yourself and your mount. Charisma is your spellcasting ability for this spell.

Once you use this feature to cast this spell, you can’t do so again until 7 days pass.

The chain whip is a favored weapon of many Spirits of Vengeance.