8 Items to Put on Your Dungeon Master Holiday Wish List 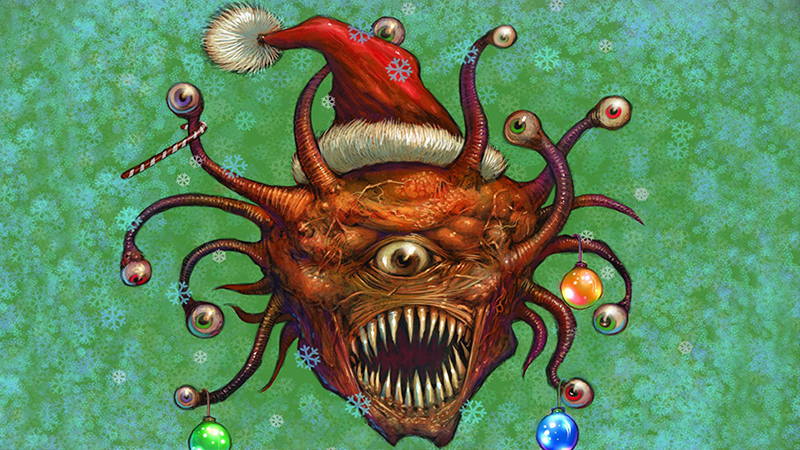 The holidays are right around the corner. And you know what that means? Getting other people to spend money on you! If you’ve been thinking about becoming a Dungeon Master for Dungeons & Dragons Fifth Edition, then let me help you out with this holiday wish list. These are 8 items that I personally use in my own Dungeons & Dragons campaigns I recommend you do, too.

This one is probably a no-brainer, but if you’re going to be running Dungeons & Dragons, you’re going to need the books, right? If you’re brand spanking new to D&D and don’t know anything else about it, these are the three things you need to start.

All three of them are available on Amazon, each for less than $29.

The three books you need are as follows:

The best deal you can find for dice is probably the Smartdealspro 5×7 two colors dices series. You get 5 different colors of dice each with its own bag. That way, if you’ve got some players who don’t have dice, you can share!

You gotta have a good Dungeon Master Screen. The DM Screen is what keeps those pesky players from viewing your notes while you’re playing. I’ve used a few different ones, but for my money, I like the official Dungeons & Dragons screen, the Dungeon Master’s Screen Reincarnated. It lies landscape vs portrait, making it easier for you to see over it. The stiff ones that brands like Strategem make aren’t bad, but they can be tough to look over.

Heed my words: under no circumstance, should you ever buy a battle mat from a company other than Chessex. The other brands might look cool, but trust me… they stink. Chessex creates awesome wet-erasable battle mats that have both hex and square sides to them, perfect for your Dungeons & Dragons battles. Check them out on Amazon. I use two, one that’s 24″ x 36″ and a bigger one that’s 36″ x 48″. Don’t forget to get some wet erase markers to go with them, too.

Okay, you’re probably thinking, “Dave. Furniture pads? Are you serious?” Now hear me out. I use a lot of different monsters in my campaigns. I get bored if I use the same stuff over and over again. Therefore, it doesn’t make sense for me to use miniatures for anything besides the PCs. I’d be broke!

Instead, what I do is create my own tokens. The process is pretty simple.

At this point, I have literally hundreds of furniture pads all with D&D monsters of them. It’s way more cost effective than buying one-and-done miniatures for my campaigns.

The furniture pads are pretty cheap on Amazon (like $5 for a pack of 48).

Once you get a lot of D&D stuff, you’ve got two options. First, host

the games at your place. But if that isn’t an option, then you’re going to need a good way to lug everything around. That’s why I use a rolling cart.

All I have to do is throw all my stuff into it and cart it off to wherever the game is going to be. Easy peasy. They’re pretty cheap, too. I think I paid like $30 for mine.

I used to have trouble with dungeon maps and getting my players to visualize the game. Old school me would have just asked someone to map it out as they went.

But I wanted to make my current game something special. So I tried everything: drawing it as they went on a battle mat, pre-printing maps, even doing theater-of-mind.

But the best solution I’ve discovered so far is putting my maps into photoshop, covering up rooms with black squares, and then revealing them as the players go. I project all this up on a TV screen. All that requires is my laptop and an HDMI cable long enough to reach the TV.

Like I said, this is a bit more advanced, but it really works for me and my players love it.

Shameless self-plug time, but I’m selling a coffee mug over on Red Bubble. Not only is it a badass coffee mug to help you caffeinate your way through all the planning and session-running you’re going to need to do, but it’s also a fully functional magic item compatible with Dungeons & Dragons Fifth Edition. For a limited time, it’s only $15.60! The perfect gift for a friend or, you know… yourself.

Check it out over on Red Bubble.

This list is full of killer stuff that I use for my own campaigns. And a lot of it came through trial and error. Hopefully, you can find as much value in these as I did with this wish list for Dungeons & Dragons Fifth Edition.

Images from Amazon. Beholder image from Geek and Sundry.