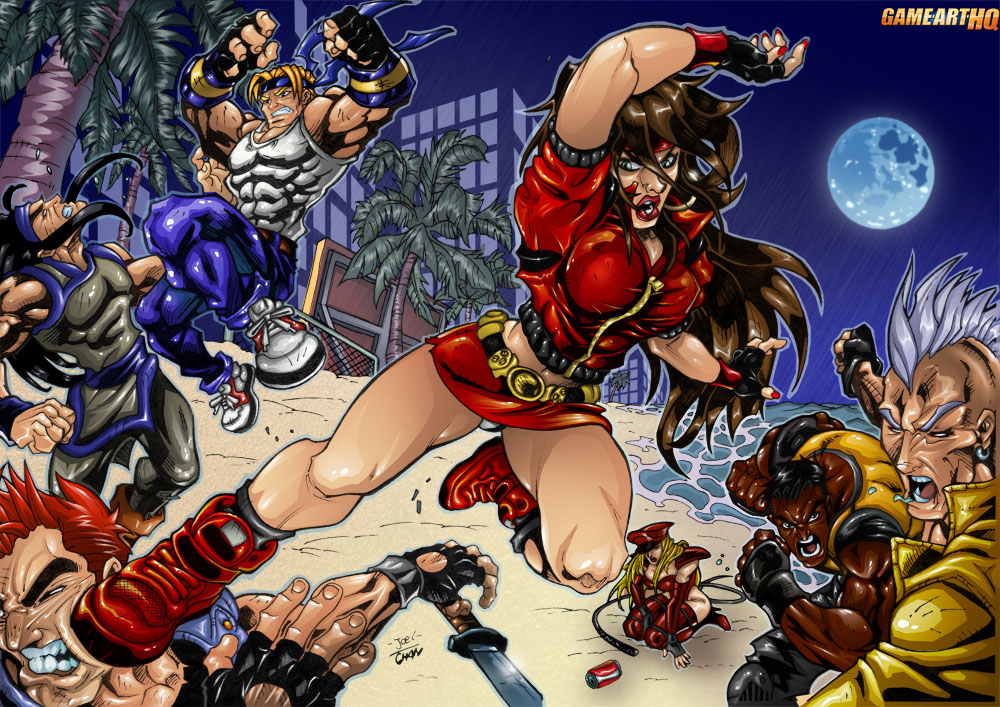 A few months back, I was kicking around the idea of starting up my own 5e campaign world. The idea was simple: it would take place in a semi-modern world of the late 1980’s early ’90s. And the characters would all be tropes of the beat-em-up style games and high-testosterone films of that era. Sure, they’d fight off street toughs, ninjas, and all that good stuff, but to really spice things up, I’d throw in monsters, aliens, and cyborgs from that period, too.

Think Double Dragon versus They Live.

I call it Fist of Legend.

While creating cool monsters for the blog with my Stat Anything and Daily Monsters series, I’ll also sprinkle in some Fist of Legend ideas. Fortunately, I already came up with most of the playable races and classes. Now it’s just a matter of putting ideas on paper–or on the blog, as it were.

Then, once I’ve got enough material cobbled together, I’ll do like any blogger/content creator worth their salt does: kickstart the shit out of it.

First things first. This isn’t just a normal human world set in the ’80s. Been there, done that. Instead, it’s a fantastical world where dragons hide in subway tunnels and dopplegangers are successful Wall Street greaseballs. George HW Bush is (probably) an alien and Bogeymen are “out from under the bed” and ready to be treated as equals.

Get ready for a wild ride.

Here’s the first five playable races for Fist of Legend.

Granted, I’ll probably need a few more races along the way, but this is as good as start as any.

These playable races are available to use in your own 5e campaigns. Just not commercially! And the art isn’t mine. It’s borrowed from around the web and from my pal, Joel Sousa!

Humans are tough to nail down as to what they’re good at. Regardless, here’s the basics.

Age. Humans reach adulthood in their late teens and live less than a century.

Alignment. Humans tend toward no particular alignment. They can be completely vile and destructive or equally just and good.

Martial Arts. You have proficiency with one martial arts of your choice.

Size. Humans vary widely in height and build, from barely 5 feet to well over 6 feet. Regardless of your position in that range, your size is Medium.

Skills. You gain proficiency in one skill of your choice.

Feat. You gain one feat of your choice.

Languages. You can speak, read, and write Common (the language of the world’s name will probably change, but I know that I didn’t want to make it “English” ’cause that’s just tacky) and one extra language of your choice.

Spiritfolk possess all sorts of wild powers thanks to their fey ancestry.

Age. Spiritfolk reach maturity at about the same age as humans. However, a spiritfolk can live for 750 years or more.

Alignment. Spiritfolk cherish their freedoms. Thus, they tend towards the chaotic alignments. However, they also love the world around them and tend towards good as well.

Martial Arts. You have proficiency with Sylvan Aikido.

Size. Spiritfolk range from under 5 to over 6 feet and have slender builds. Your size is Medium.

Fey Ancestry. You have advantage on saving throws against being charmed, and magic can’t put you to sleep.

Keen Senses. You have proficiency in the Wisdom (Perception) skill.

Trance. Spiritfolk don’t need to sleep. Instead, they meditate deeply, remaining semiconscious, for 4 hours a day. While meditating, you can dream after a fashion; such dreams are actually mental exercises that have become reflexive through years of practice. After resting in this way, you gain the same benefit that a human does from 8 hours of sleep.

Wild Child. You can attempt to hide even when you are only lightly obscured by foliage, heavy rain, falling snow, mist, and other natural phenomena.

Languages. You can speak, read, and write Common and Sylvan.

Pranksters and tinkerers, mogui are just as clever as they are devilish.

Age. Mogui reach adulthood at age 6 and can live up to 120 years (if they don’t get eaten first).

Alignment. Mogui tend towards chaotic neutral, as they enjoy causing mischief. There are a few around who may be good or lawful, but those are rare.

Martial Arts. You have proficiency with wing chun.

Size. Mogui are between 2 and 3 feet tall and weight between 25 and 35 pounds. Your size is small.

Artificer’s Lore. Whenever you make an Intelligence (History) check related to magic items, alchemical objects, or technological devices, you can add twice your proficiency bonus, instead of any proficiency bonus you normally apply.

Darkvision. You can see in dim light within 60 feet of you as if it were bright light.

Mogui Cunning. You have advantage on all Intelligence, Wisdom, and Charisma saving throws against magic.

Nimble Escape. You can take the Disengage or Hide action as a bonus action on each of your turns.

Sunlight Sensitivity. You have disadvantage on attack rolls and on Wisdom (Perception) checks that rely on sight when you, the target of your attack, or whatever you trying to perceive is in direct sunlight.

Languages. You can speak, read, and write Common and Mogui.

They used to be the “things that went bump in the night.” Now, boogies are (mostly) productive members of society. But hey, that doesn’t mean that they still don’t give the other humanoids the creeps.

Age. Boogies reach adulthood at age 16 and live up to 80 years.

Alignment. While boogies have calmed down considerably since the “before times”, they still lean heavily towards the evil alignments. However, it’s not unusual for boogies to be completely neutral.

Martial Arts. You have proficiency with brawling.

Size. Boogies are between 6 and 9 feet tall and weigh between 250 and 350 pounds. Your size is Medium.

Menacing. You gain proficiency in the Charisma (Intimidation) skill.

Powerful Build. You count as one size larger when determining your carrying capacity and the weight you can push, drag, or lift.

Savage. When you score a critical hit with a melee weapon attack, you can roll one of the weapon’s damage dice one additional time and add it to the extra damage of the critical hit.

Languages. You can speak, read, and write Common and Goblin.

Morphies are the results of science experiments gone wrong, strange magic, and ancient bloodlines. They come in four popular varieties: aquilans, lupins, macacas, and testudos. Most morphies tend to be shorter yet sturdier than humans.

Alignment. Macacas tend towards chaos, while aquilans, lupins, and testudos are lawful. Regardless, they all lean towards good.

Size. Most morphies stand between 4 and 5 feet tall and average about 120 pounds. Your size is Medium.

Speed. Your base walking speed is 25 feet. Your speed is not reduced by wearing heavy armor.

Darkvision. Thanks to your animal heritage, you have superior vision in dark and dim conditions. You can see in dim light within 60 feet of you as if it were bright light, and in darkness as if it were dim light. You can’t discern color in darkness, only shades of gray.

Languages. You can speak, read, and write Common and one other language of your choice.

Part flightless eagle and part humanoid, aquilans are wise and perceptive, but painfully stubborn at times.

Martial Arts. You have proficiency in savate.

Stubborn. You have advantage on saving throws against being charmed.

Talons. Your talons are natural weapons, which you can use to make kicks. If you hit with them, you deal slashing damage equal to 1d4 + your Strength modifier, instead of the bludgeoning damage normal for a kick.

Martial Arts. You are proficient in karate.

Loyalty. When a creature you can see attacks a target other than you tha t is within 5 feet of you, you can use your reaction to impose disadvantage on the attack roll.

Bite. You have a powerful bite. Your bite is a natural weapon which you can use to make an attack. If you hit with it, you deal piercing damage equal to 1d6 + your Strength modifier.

Martial Arts. You are proficient in jiu jitsu.

Speed. Your base walking speed is 30 ft.

Prehensile feet. You have proficiency in Dexterity (Acrobatics). In addition, you have a climbing speed of 30 ft.

Prehensile tail. When you take the Attack action and attack with a melee weapon that you’re holding in one or both hands, you can use a bonus action to attack with a different light melee weapon that you’re holding in your tail. You don’t add your ability modifier to the damage of the bonus attack, unless that modifier is negative. If either weapon has the thrown property, you can throw the weapon, instead of making a melee attack with it.

Nearly as as they are tough, don’t let a testudo’s turtle-like appearance fool you; they’re tough little critters.

Martial Arts. You are proficient in ninjitsu.

Hero. You have advantage on saving throws against being frightened.

It’s pretty exciting creating some of this stuff. Born in the early ’80s, I really got to experience the zaniness of the late ’80s/early ’90s with childlike wonderment. I remember the video games, the movies, and all the comics. And 1991 was the first year I experienced D&D! So it’s awesome to take all those things and put them together.

Next up for Fist of Legend, I’m going to detail the starting player classes. See you then!