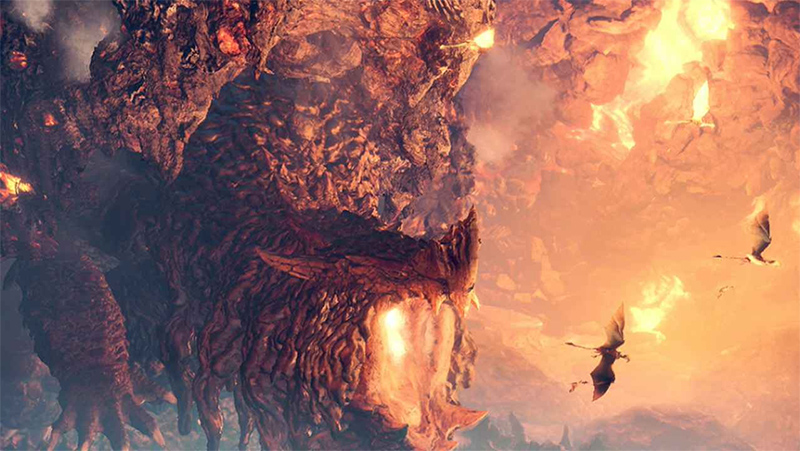 Welcome back to Stat Anything. Today, I’ll be putting together stats for a monstrous elder dragon from the game Monster Hunter: World, Zorah Magdaros. This Stat Anything was requested by Instagram follower @handsofd34th.

Here’s what this article covers:

Who is Zorah Magdaros?

According to Monster Hunter: World’s Wiki, Zorah Magdaros is a colossal elder dragon standing over 840 feet tall. Fire spewing from its mouth and back, the dragon’s essentially a walking volcano.

And its unkillable, too. Sure, it has some soft spots along its chest and under its mountain-like shell, but all one can really do is drive it away.

Some other things learned from MH:W Wiki:

And that’s really all there is to it!

But how can we create something that’s easily bigger than anything else that’s ever been in any edition of Dungeons & Dragons?

How to create Zorah Magdaros for 5th edition Dungeons & Dragons

To be true to Zorah, I’m going to have to think a little outside the box.

Standing at fifty-feet-tall and measuring seventy-feet in length, the infamous tarrasque is currently the largest creature in Dungeons & Dragons fifth edition.

In 3rd edition, Colossal started at about 64 feet and went beyond.

But I doubt it went 10 times beyond!

In fact, at 845 feet, Zorah’s a beast the size of the Devon Energy Tower in Oklahoma City.

The other big thing to consider here is that Zorah Magdaros is unkillable.

Now, again, I bring up the tarrasque comparison.

The tarrasque is virtually unkillable itself.

Even a group of level 20+ adventurers would have trouble taking that legendary beast down.

Keith Ammann wrote a pretty excellent article about fighting the tarrasque that I recommend reading.

Basically, anyone who tells you that they took down the tarrasque in a game of D&D is either super lucky, full of shit, or has a lousy DM.

Possibly a combination of the three.

That’s why when it came to figuring out the stats for a epic sized elder dragon like Zorah, I knew just a simple stat block wouldn’t work. At least not in the normal sense.

Instead, of creating a monster I needed to create a challenge.

In other words, Zorah is a dungeon, not a dragon.

Making Zorah into a map.

When you “fight” Zorah in MHW, you have to jump onto his back and attack his magma cores. This weakens him enough that you can then attack him with ballista on the bridge. Shoot him enough times and he’ll fall into the water and scoot off to sea. Huzzah!

Question is, how big should the back of a 845-foot tall monster be?

Calculating the length of Zorah’s back.

The Monster Manual says that the tarrasque stands 50 feet tall and is 70 feet long.

Using the same ratio of 7:5, that means Zorah’s total length from tail to nose is roughly 1,183 feet.

Fortunately, in the videos of hunters running around his back there’s a mini-map in the corner. Taking that mini-map and blowing it up, I was able to map out the main locations on his body.

Here’s what we got:

Errata: rewatching the videos this morning, I notice that Zorah’s head extends out roughly 200-300 feet from his shell in later parts of the game. I might do similar with this map. In the meantime, you might consider his head to be an unstable platform roughly 40-50 across in front of area #4. Also, as far as his size goes, the scale varies greatly depending on where you see him. This is typical in video games and a headache I deal with often when adapting them for D&D 5e!

This challenge is free for you to use in your own 5e campaigns. Just not commercially! And the art (other than the map) isn’t mind. Borrowed!

Here’s what you need to know in order to successfully fight Zorah.

Once creatures find their way onto Zorah’s back, it’s an uphill battle.

Each gradation on his back takes a climb check, requiring a DC 15 Strength (Athletics) check to get up it.

Note that the pit in area #3 is 50′ deep. So it can be difficult for some creatures without climbing speeds or magical methods of flight to get out of.

The entirety of Zorah’s back counts as difficult terrain and it is at roughly a 45 degree angle from tail to head which makes it a rolling hazard.

Any creature that loses its footing and falls prone on Zorah’s back must make a DC 10 Dexterity saving throw or start rolling down Zorah’s back.

While rolling, a creature is incapacitated.

At the end of each of its turns, the rolling creature may make another DC 10 + 1 for every 10 feet rolled (maximum DC 15) Strength (Althetics) check or Dexterity (Acrobatics) check to stop itself.

Once stopped, a creature lands prone in the space it stopped and does not require an additional save to prevent rolling until it stands again.

If the creature is unable to stop rolling, it moves 50 feet towards Zorah’s tail.

And if the creature hits an object or another creature, it will stop moving and fall prone in the space it stopped without requiring an additional save to prevent rolling until it stands again. Also, it takes 1d6 damage per every 10 feet rolled (maximum 5d6).

In addition, if another creature is hit by a rolling creature, that creature must make a DC 10 Dexterity saving throw.

If a creature is pushed off or rolls off the edge of Zorah’s back, it must make a DC 10 Dexterity saving throw to try to catch itself.

On a failure, the creature falls 500+ feet to the ground below.

While falling, the creature has until the end of its next turn to try to save itself.

If it is unable to do so, the creature takes 20d6 bludgeoning damage from the fall.

Zorah’s back is extremely hot.

A creature exposed to the heat and without access to drinkable water must succeed on a Constitution saving throw at the end of each hour or gain one level of exhaustion.

The DC is 5 for the first hour and increases by 1 for each additional hour.

Creatures wearing medium or heavy armor, or who are clad in heavy clothing, have disadvantage on the saving throw.

Creatures with resistance or immunity to fire damage automatically succeed on the saving throw, as do creatures naturally adapted to hot climates.

Here are the stats for magma cores:

Death Burst. When the magma core is destroyed, it explodes in a burst of fire and magma. Each creature within 20 feet of it must make a DC 15 Dexterity saving throw, taking 21 (6d6) fire damage on a failed save, or half as much damage on a successful one. Flammable objects that aren’t being worn or carried in that area are ignited.

Zorah’s back is incredibly dangerous and filled with all sorts of hazards.

Each minute that the characters are on Zorah’s back, roll a d20 and consult the following table:

Falling Rocks. At the start of the round, boulders roll down Zorah’s shell in a 80 foot line that’s 20 feet wide starting at a point 20 feet away from the character closest to Zorah’s head. Any creatures in the line must make a Dexterity 10 saving throw or take 2d6 bludgeoning damage and be knocked prone.

Flame Gout. Fire erupts from part of Zorah’s shell, creating a burst of flame identical to a burning hands spell. The cone starts in a space of a random character and shoots in a random direction.

Lava Rain. At the start of a round, lava droplets spray and fall in a 20-foot-diameter area, dealing 9 (2d8) fire damage to any creature that enters the area for the first time on a turn or starts its turn there. The drops ignite exposed flammable objects. The rain ends at the end of a round 2d4 rounds later.

Smoke Cloud. A cloud of smoke kicks up, filling an rea 40 feet in diameter and causing that area to become lightly obscured. The smoke dissipates in 1d4 minutes unless a wind disperses it.

Sulphur Cloud. A discharge of noxious fumes erupts from a nearby vent. The effects are identical to a stinking cloud spell.

There are four major locations on Zorah’s back.

This small “room” is hidden between Zorah’s tail and his shell. There is a magma core here.

Another magma core can be found here.

Climbing to the top of the mountain, creatures will find a fifty-foot deep pit that puts them close to Zorah’s heart. The third magma core is here.

Standing on the back of Zorah’s head is a risky affair as his head is constantly moving.

On Zorah’s initiative count, any creatures standing on Zorah’s head must make a DC 19 Dexterity saving throw or be thrown 100 feet in a random direction and land prone.

Colossal Creature. Zorah adds double his Strength modifier to his attack and damage rolls, and his Strength checks. In addition, all creatures on Zorah’s back and head have full cover against his bite and swallow attacks.

Frightful Presence. Each creature of Zorah’s choice within 1200 feet of him and aware of him must succeed on a DC 17 Wisdom saving throw or become frightened for 1 minute. A creature can repeat the saving throw at the end of each of its turns, with disadvantage if Zorah is within line of sight, ending the effect on itself on a success. If a creature’s saving throw is successful or the effect ends for it, the creature is immune to Zorah’s Frightful Presence for the next 24 hours.

Swallow. Zorah makes one bite attack against a Huge or smaller creature he is grappling. If the attack hits, the target takes the bite’s damage, the target is swallowed, and the grapple ends. While swallowed, the creature is blinded and restrained, it has total cover against attacks and other effects outside Zorah, and it takes 112 (32d6) fire damage at the start of each of Zorah’s turns. If Zorah takes 200 damage or more on a single turn from a creature inside it, Zorah must succeed on a DC 20 Constitution saving throw at the end of that turn or regurgitate all swallowed creatures, which fall from Zorah’s mouth and 500 feet to the ground below. That creature has one round to react, or will take 70 (20d6) bludgeoning damage the fall at the end of its turn. If Zorah dies, a swallowed creature is no longer restrained by him and can escape from the corpse by using 400 feet of movement, exiting prone.

Well, this was pretty fun! Honestly, I had no idea what to expect when I started putting together stats for this beast, but I think it worked out pretty well. Almost makes me kinda wanna make a full-on set of kaiju rules for fifth edition Dungeons & Dragons!

Perhaps something for another time?

Anyways, if you haven’t already, be sure to follow along for updates by signing up on the opt-in on the right column or in the footer.

If you have requests, questions, or comments, be sure to leave them below.

4 thoughts on “Stat Anything: Zorah Magdaros for 5e D&D”