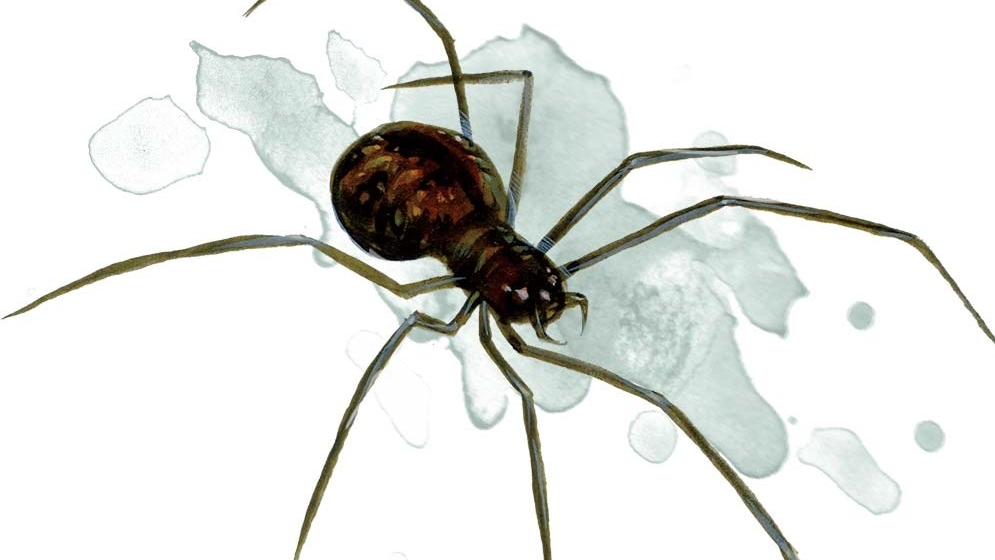 The goblin spider, or earth spider, looks like a huge, furry spider of a particularly evil cast. It lurks in the Forest Ridge just beyond the Ringing Mountains and is a bane to the wild halflings that live there.

The goblin spider has a plump abdomen, eight spindly legs, and two curving mandibles capable of grasping and crushing its victims. Long fur, usually black or dark green laced with golden or scarlet stripes, completely covers its body. It has a dozen eyes, arranged in four rows of three, resembling those of a human; the eyeballs are black or golden, the pupils white or dark green.

Goblin spiders are excellent mimics, able to imitate any voice or animal sound they have ever heard. (When imitating a language they don’t understand, they only can repeat words or phrases they actually have overheard, verbatim.) The devious spiders often use this ability to lure victims to their doom.

Goblin spiders dwell far from human habitations, mainly in densely forested mountains. Eons ago, goblin spiders dominated large sections of land now controlled by humans; they now view humans and their allies as trespassers on their homelands. Goblin spiders take every opportunity to cause harm to human travelers and settlers on the edges of their territories.

Ecology. At about 10 years of age, a male goblin spider reaches maturity. He looks for a mate-a dangerous proposition, considering females sometimes mistake the males for prey. If the male avoids attack, he mates as quickly as possible then flees into the wilderness. A few weeks later, the female lays an egg sac at the bottom of her tunnel. She dies shortly thereafter. The sac contains several hundred tiny eggs. When the first few spiderlings hatch (usually about 1-6), they destroy the rest of the eggs, then scramble from their mother’s tunnel to seek out lairs of their own. The spiderlings grow to full size in about two months.

The Earth Spider. Although goblin spiders do not form organized societies, large groups of them sometimes assemble in huge underground caverns to worship an extraplanar entity called “the Earth Spider:’ The Earth Spider is an evil spirit that looks like a huge black spider with the face of a screaming man. It lives in the Gray. Goblin spiders themselves occasionally are called earth spiders by those unaware of the actual spirit.

Ambusher. In the first round of a combat, the spider has advantage on attack rolls against any creature it surprised.

Mimicry. The spider can mimic any sounds it has heard, including voices. A creature that hears the sounds can tell they are imitations with a successful DC 14 Wisdom (Insight) check.

Spider Climb. The spider can climb difficult surfaces, including upside down on ceilings, without needing to make an ability check.

Multiattack. The spider makes two attacks with its claws.

Claw. Melee Weapon Attack: +6 to hit, reach 5 ft., one target. Hit: 7 (1d8 + 3) piercing damage, and if the target is a creature it is grappled (escape DC 16). While grappled, the target is restrained and the spider can use its bonus action on each of its turns to make one bite attack against the grappled target.