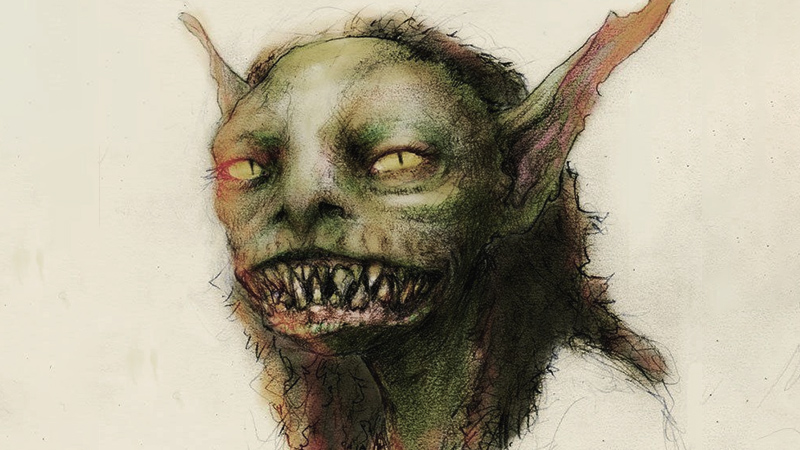 Goblyns are hideous creatures with slightly bloated heads, pointed ears, and glowing red eyes. They have long, mangy hair which grows only on the back of their head and necks. About half of their face is taken up with a wide mouth full of needle-sharp teeth.

These creatures are formed by powerful evil magical items and spells which transform humans into these twisted beings. This transformation causes them to become very evil and totally submissive to their master’s every whim.

Goblyns have a telepathic link with their master and, through him, with all of the other goblyns he controls.

Goblyns are totally controlled by their master’s desires. If they are told to attack another of their kind, they will do so without pity. They never instigate combat on their own, but eagerly leap to the attack if challenged or instructed to do so. Goblyns have no apparent desires other than to fulfill their master’s every whim with an emotionless devotion.

Goblyns do not sleep, tire, or become bored. Furthermore, they can go for a considerable amount of time without food or drink.

Goblyns are strict carnivores. They will eat only freshly killed meat, in addition to drinking the blood of their victims.

Goblyns are often sought after by certain wizards and priests, for they are useful as components in spells and magical items that control humans.

Ambusher. In the first round of a combat, the goblyn has advantage on attack rolls against any creature it has surprised.

Horrific Gnashing. As a bonus action, the goblyn can bare its teeth in an attempt to frighten its targets. Each creature of the goblyn’s choice that is within 30 feet of the goblyn and aware of it must succeed on a DC 12 Wisdom saving throw or become frightened until the end of its next turn. If a creature’s saving throw is successful or the effect ends for it, the creature is immune to all goblyns Horrific Gnashing for the next 24 hours.

Fearsome Opportunist. If the goblyn hits a creature that is frightened, the target takes an extra 10 (3d6) damage from the attack.

Bite. Melee Weapon Attack: +4 to hit, reach 5 ft., one creature that is grappled by the goblyn, incapacitated, or restrained. Hit: 9 (2d6 + 2) piercing damage, and the target’s Charisma score is reduced by 1. A creature cannot have its Charisma score reduced below 5 due to damage it takes from a goblyn’s bite. The reduction lasts until the target receives magical healing.