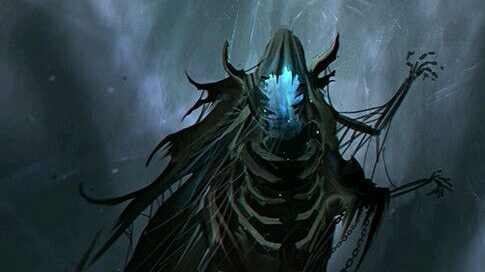 A specter is the angry, unfettered spirit of a humanoid that has been prevented from passing to the afterlife. Specters no longer possess connections to who or what they were, yet are condemned to walk the world forever.

Greater specters are older specters who maintain a piece of their undying quest. Although more rational than their lesser kin, they are also far more dangerous.

Undead Nature. The greater specter does not require air, food, water, or sleep.

Greater specters influence the locations they haunt, exerting their will over their surroundings. Often, the specter’s lair is a tomb where its original body rests. Some long-forgotten mission binds it to that location. Then, the intense psychic energy the specter emits distorts and changes the place. Thick, musty mist clings to the floors. It’s always cold, even in the middle of summer. And dark, pervasive thoughts echo through the thoughts of trespassers.

On initiative count 20 (losing initiative ties), the specter takes a lair action to cause one of the following effects; the specter can’t use the same effect two rounds in a row:

Incorporeal Movement. The specter can move through other creatures and objects as if they were difficult terrain. It takes 4 (1d10) force damage if it ends its turn inside an object.

Legendary Resistance (3/Day). If the specter fails a saving throw, it can choose to succeed instead.

Magic Resistance. The specter has advantage on saving throws against spells and magical effects.

Sunlight Sensitivity. While in sunlight, the specter has disadvantage on attack rolls, as well as on Wisdom (Perception) checks that rely on sight.

Life Drain. Melee Spell Attack: +9 to hit, reach 5 ft., one creature. Hit: 28 (8d6) necrotic damage. The target must succeed on a DC 17 Constitution saving throw or its hit point maximum is reduced by an amount equal to the damage taken. This reduction lasts until the creature finishes a long rest. The target dies if this effect reduces its hit point maximum to 0, and returns as a wraith in 1 minute.

Invisibility. The specter magically turns invisible until it attacks or casts a spell. Any equipment the specter wears or carries is invisible with it.

Hey all! I’m on Facebook now and already I’ve got over 4,000 followers! They get exclusive content, memes, and first look at all my cool stuff. Join now!