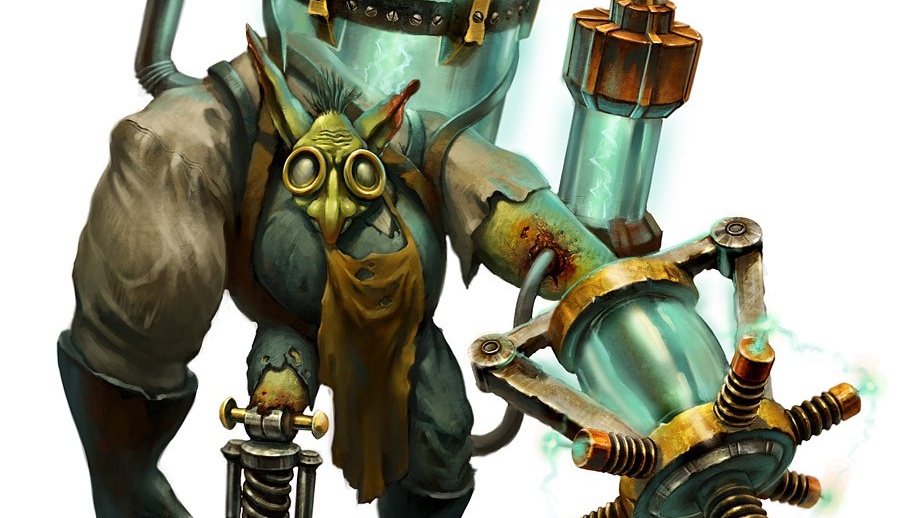 Magic coupled with machinery can equip organic creatures with mechanical limbs, metallic skin, and other machine enhancements. The result is a half-machine. A half-machine can come in various shapes and sizes, depending on the base creature type and the extent of the mechanical modifications.

Most half-machine creatures are hideous to behold, while some might appear quite normal or at least aesthetically pleasing if their mechanical enhancements are lovingly crafted or well hidden. Fusions of the organic and metallic, half-machine creatures are typically shunned by society. Their builders tend to be mad wizards and sorcerers, tyrants with sophisticated technology at their disposal, and other malcontents willing and able to take living, breathing creatures and transform them into half-metal mockeries of their former selves.

Any creature other than constructs, elementals, oozes, and undead can become half-machine. It keeps its statistics except as follows.

Armor Class. The half-machine gains a natural AC of 19 unless it is already higher.

Speed. Some half-machines gain metallic wings which allow the creature to fly at the same speed as its base walking speed.

Skills. The half-machine gains proficiency with Athletics and Perception. If the base creature already has these proficiencies, then its proficiency bonus doubles for these skills.

Damage Immunity. The half-machine is immune to poison.

Damage Resistance. The half-machine gains resistance to bludgeoning, piercing, and slashing from nonmagical weapons not made from adamantium.

Condition Immunities. The half-machine is immune to the poisoned condition.

New Trait: Magic Resistance. The half-machine has advantage on saving throws against spells and other magical effects.

New Trait: Partial Construct. A half-machine is immune to diseases and has advantage on saving throws against being charmed or frightened.

New Trait: Programmed. The half-machine is programmed to completely obey its creator as if under the effects of a dominate monster spell. AIf the creator dies or is destroyed, the half-machine becomes free-willed, but the residual program gives the half-machine disadvantage on Wisdom saving throws. The programming can be erased only with a wish or similar spell.

Improved Natural Attack. If the base creature has natural attacks, and the damage dice it uses are d4s, d6s, d8s, or d10s, its damage dice increases by one die. For example, a creature that uses d6s for its claw attack instead uses d8s as a half-construct.

If the base creature does not already have a natural attack, it gains a natural attack. Choose a bite (piercing), claw (slashing), slam (bludgeoning), or gore attack (piercing). Reference the chart below to determine the reach and damage of the attack (the creature uses your choice of its Strength or Dexterity modifier for attack rolls):

New Attack: Energy Cone (1/Day). A half-machine can belch forth a cone of energy once per day. When you apply this template to the base creature, choose a damage type: acid, cold, fire, lightning, or thunder. The size and damage of the cone depends on the size of the creature.  Creatures in the area must make a Dexterity saving throw against a DC of 8 + the half-machine’s proficiency bonus + the half-machine’s Constitution modifier.

This example uses a goblin as the base creature.

Damage Resistances bludgeoning, piercing, and slashing from nonmagical attacks not made with adamantium

Magic Resistance. The half-machine has advantage on saving throws against spells and other magical effects.

Nimble Escape. The half-machine can take the Disengage or Hide action as a bonus action on each of its turns.

Partial Construct. A half-machine is immune to diseases and has advantage on saving throws against being charmed or frightened.

Programmed. The half-machine is programmed to completely obey its creator as if under the effects of a dominate monster spell. If the creator dies or is destroyed, the half-machine becomes free-willed, but the residual program gives the half-machine disadvantage on Wisdom saving throws. The programming can be erased only with a wish or similar spell.

Cone of Acid (1/Day). The half-machine belches forth a 20-foot cone of acid. Each creature in the area must make a DC 13 Dexterity saving throw or take 7 (2d6) acid damage on a failed saving throw, or half as much damage on a successful one.

This is another old school adventure from Dungeon magazine. This one is called Kambrinex’s Machinations and it involves a cool plot involving turning innocent creatures into robots! Stay tuned.

Also, keep an eye out for adventures coming to PDF format over on my Patreon.