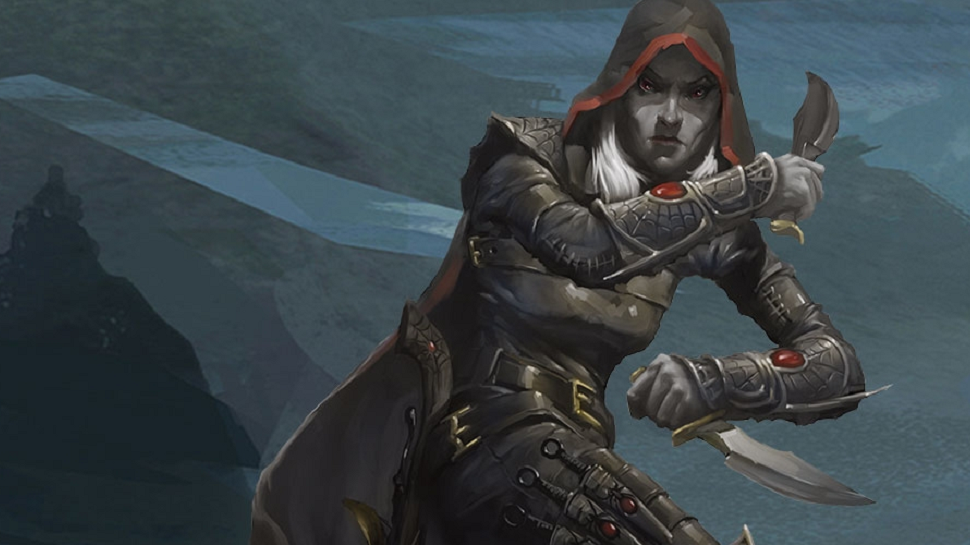 For a long time now, this has been my most popular article. Recently, I got off my lazy butt and finally decided to create a PDF for this. You can get it on my Patreon. That way, you can download it and read it on your own time.

Step #1 – Overview of the Roguish Archetypes.

As of this writing, there are seven rogue archetypes. They are arcane trickster, assassin, inquisitive, mastermind, scout, swashbuckler, and thief.

Some things to know about roguish archetypes:

Next, we want to identify the hidden role behind each of the archetypes. Here are my thoughts on each backed up by internet research.

Arcane Trickster – The arcane trickster is a half-caster that boosts its normal roguish abilities with magic. It also has a lot of unique abilities tied to the use of its mage hand. I should note that the arcane trickster feels more like a mage with rogue abilities than a rogue with magic abilities. The biggest drawback it has, though, is that its spell choices are limited only to enchantments and illusions.

Assassin – Assassins have two main parts to their structure. First, they’re big-time damage dealers, getting huge boosts to their attacks when they catch opponents by surprise as reflected in their 3rd and 17th level features. Second, they’re awesome spies, as they have infiltration expertise and imposter abilities. So not only are they cool in combat, but have a lot of flavor in roleplaying situations as well.

Inquisitive – Inquisitive rogues are great at detecting secrets. Right from the beginning, they’re experts at Insight, Investigation, and Perception checks. In fact, it even helps them with their sneak attacks, too, which improves at 17th level.

Mastermind – Masterminds are the archetypical “villain”, sort of a Game of Thrones’esque rogue that uses subterfuge and manipulation to get their way. They can sense the mental abilities of others, misdirect attacks on themselves, and trick mindreaders. Of all the archetypes, this is the weakest in combat, although, may act as a party buff when used right. However, I think it’s intentionally designed that way.

Scout – The scout is excellent at stealth and survival. At 3rd level, they can move up to half their speed when someone gets near them and at 9th they get another 10 feet of movement. Later, they gain proficiency in nature and survival and become experts in those skills. To round it all out, they can make two sneak attacks per turn, one of which is a bonus action! In my opinion, this is the strongest of all the archetypes.

Swashbuckler – Swashbucklers are fancy fighters and crowd controllers. At 3rd, they avoid opportunity attacks from movement and get to add their Charisma bonus to their initiative. Plus, they get to sneak attack if they are the only creature within 5 feet of a creature. Later, they can charm creatures with their Charisma alone which gives creatures they’re up against disadvantage against targets other than you (they “hey, fight me, ya jerk!” power). At 13th, they can use their bonus action to gain advantage on the next Acrobatics or Athletics check they make. And finally, at 17th, if you miss an attack roll, you can roll it again with advantage (usable once per long rest).

Thief – The thief is the classic rogue, capable of breaking into just about damn near anything. One of their strongest powers is their ability to take two rounds during the first round of combat (!!!) which they get at 17th level. They also get a number of boosts to their Stealth and Sleight of Hand skills and can climb fast.

Now that we’ve observed all of our roguish archetypes, we need a way to observe their power levels. This part is a little trickier since there are no real rules for class or subclass creation in any of the official Fifth Edition material, yet. However, what we can do is know a few important things about the overall design of classes and subclasses:

With the following power level lists, I analyzed the archetype features and determined whether or not it gives the rogue a defensive bump, offensive bump, or if it was just pure utility. I use the term “CR bump” a lot, referencing the boost certain features affect monsters’ challenge ratings.

Power Levels for the Roguish Archetypes

So what did we learn from looking at these seven archetypes? Here’s what I saw:

My patron requested a roguish archetype that relied heavily on Stealth. Therefore, that’s what I’m going to do. Interestingly, none of the other archetypes really double down on Stealth. Certainly, they all use it in interesting ways, but there’s no actual stealth expert among the bunch.

I think I’ll call this roguish archetype the Unseen. Mostly ’cause it sounds cool AF.

Here’s a rough idea of how I’ll balance the Unseen roguish archetype:

To build on this stealth class, we have to understand a number of things about hiding and stealth, too, which has kinda wonky rules in Fifth Edition.

Here is everything you need to know about Stealth in Fifth Edition (as it pertains to Rogues):

First up, we need to figure out what the utility feature is that the Unseen gains at 3rd-level. We want this to be a total stealth machine. Of course, any self-respecting rogue is going to have Stealth as one of the skills they are proficient in and probably use their 2nd-level Expertise to boost it. So we can cross both those out.

I think the best use for the 3rd-level ability is to allow the rogue a feature similar to the ranger’s Natural Explorer ability where if you are traveling alone, you can move stealthily at a normal pace. But let’s take it one step further and allow it to do so at a fast pace, too.

The first idea I got to help out our stealthy rogue was to make it so making attacks from hiding wouldn’t reveal its position. Some might argue that doing it just like that might seem overpowered. However, I would rebut that it isn’t. And here’s why: Insightful Fighting uses a bonus action to make Wisdom (Insight) checks contested by a target’s Charisma (Deception) check. If you succeed, you get to use your Sneak Attack against that target even if you don’t have advantage. That’s huge! The only weakness is that it doesn’t rely on Dexterity to use it, making it somewhat MAD. So that’s where the balance comes in.

But the thing about Insightful Fighting is that it is leveraged against a skill that you’re obviously going to be an expert in versus a skill that rarely pops up on monster stat blocks (Deception). Whereas, Perception comes up quite a bit in stat blocks.

I think the only limit I’ll give it is that its attack must be ranged (like a sniper).

For the 9th-level power, I want to make it so that if a Rogue uses its bonus action to Search an area, it automatically gets advantage on its next Hide check. This is good inside or outside of combat as its sort of a way to set up surprises against creatures that are on the way. It could also be helpful to put the rogue in a position where they could spy on an enemy.

Next, I think that it would be cool to have a stealth power that’s always functioning. Kind of like a “passive Stealth.” And this plays in well to the Reliable Talent feature that you pick up at 11th level.

You no longer have to use your action or bonus action to take the Hide action; you are always considered hidden and your Stealth is 10 + your Stealth modifier.

Of course, this is pretty freakin’ potent so I would say that you probably need to be in at least a lightly obscured or heavily obscured area for this feature to work. And just because you’re in Stealth mode doesn’t mean you’re optimally hidden either.

However, the rule would be that your passive Stealth is the lowest you could get for your Stealth checks (which is already the case with Reliable Talent anyways).

Finally, we have our “capstone” archetype feature at 17th. Before I decide what I want this to be, let’s take a look at our build here from 1st level to now.

And that brings us to level 17. What to get the hidden rogue that’s already totally invisible? Seriously, at this point, not even Greater Invisibility is as good as the rest of its skills. And if you remember from my analysis of the power levels for each of the rogue subclasses, the Unseen Rogue needs to get at least two ranks worth of CR-boosting goodness at 17.

Looking back at the stealth and hiding rules from above, here are the few limited drawbacks that this rogue will have:

All of these could easily be swept away with one last buff, but that doesn’t really give us the boost we need. I think maybe we take care of all these abilities and then also give the Unseen Rogue some bonus damage at 17th, probably equal to 3d6 similar to the Inquisitive’s Eye for weakness.

Step #10 – Putting it All Together

At 3rd level, a rogue gains the Roguish Archetype feature. The following Unseen option is available to a rogue, in addition to those normally offered.

You are a myth. A rumor. A ghost. Your presence rarely goes detected. The only trace you leave is the whisk of a crossbow bolt fired from a location unknown. Even those that are close to you may have trouble perceiving you as you spend your entire life in the shadows.

Beginning when you select this Roguish Archetype at 3rd level, whenever you make a ranged attack from hiding, you do not give away your location when the attack hits or misses.

At 3rd level, if you are traveling alone, you can move stealthily at a normal or fast pace.

When you reach 9th level, you can perform a quick search to find the best place to hide. As a bonus action, you can Search the area that you’re in. When you do so, make a Wisdom (Perception) or Intelligence (Investigation) check (your choice) against a DC 15. On a success, your next Dexterity (Stealth) check used to hide in that area is made with advantage. This effect lasts until the end of your next turn.

Starting at 13th level, hiding comes so naturally to you that you are always considered to be hidden. As long as you are in a lightly or heavily obscured area, you can use your Dexterity (Stealth) skill passively. Your passive Dexterity (Stealth) equals 10 + all modifiers that normally apply to the check. You may still choose to use your action or bonus action to use the Hide action in order to get a higher result.

At 17th level, your mastery of stealth makes you nearly invisible. You gain the following benefits:

If you liked this article, be sure to get the PDF version. Plus, you’ll get access to over 80 PDFs when you become a member along with requests, polls, discord, and more.