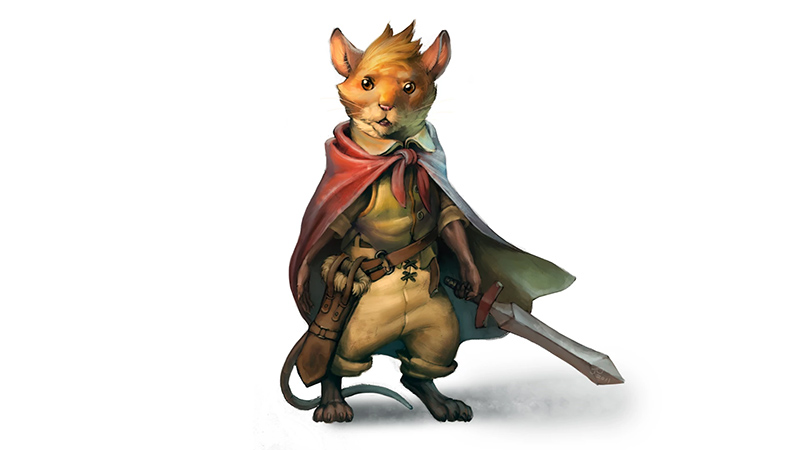 Call me old school, but I’ve always been more of a fan of weenie humanoid monsters than high CR epic level encounters.

Gimme a kobold, goblin, or skelie over a lich, dragon, or tarrasque any day.

And sure, there’s a fair amount to choose from between the three main monster books for the fifth edition. But hey! I still want to make some of my own.

When looking at humanoids in Dungeons & Dragons fifth edition, there are a few common motifs:

So what kind of weenies should I make?

I want my weenies all to be Small, I know that much.

And I want them each to have their own culture rather than be some summoned elemental (magmin, mephits) or celestial construct (modrons).

Next, Jack, my six-year-old suggested I make an anthropomorphic mouse weenie race that is super fast. He also suggested I give them teleport powers. Sure! Let’s do it!

Thinking on Jack’s idea, I thought: why not just anthropomorphize a whole bunch of the creatures in the back of the Monster Manual, Appendix A?

Literally, just go through each and every monster and turn it into a Small humanoid with a commonly shared trait. Then give them a name that sounds like a folklore.

Deep in the jungles of Chult lives a race of proud, powerful beings known as the oscisaas. These diminutive ape men are fiercely territorial and don’t take kindly to strangers, especially those bigger than they are.

Many oscisaas are great warriors, although some of their kind known as binders practice powerful elemental magic. Although there are six styles of binding magic, the oscisaa volcano binders are most common. This volcano worshipers bend flame and smoke to their will.

Manpatis are strange, flightless bird people with massive beaks; they are believed to be descendants of axe beaks. These ill-tempered humanoids are known for their short tempers and innate magic ability.

Don’t assume that laicosts are gentle because they look like adorable mouse people. In fact, laicosts are dangerously fast cutthroats, known to haunt under-patrolled backroads and dimly lit city alleys.

Laicosts often run in groups called nests which are lead their fastest member, a laicost nest boss. The nest boss’s favorite tactic is to make a hit-and-run attack on a creature, then command all its underlings to attack the same target in a dizzying display of speed and weapons skill.

Note: Jack wanted these guys to have teleport powers, but I felt that giving them misty step or something similar was a bridge too far. Plus, I’m always giving my monsters misty step (it’s my favorite spell for monsters).

These three creatures are free for you to use in your fifth edition Dungeons & Dragons campaigns. Just not commercially! And the art isn’t mine–borrowed!

Inferiority Complex. The oscisaa deals one extra die of its weapon’s damage when it hits a creature that is Medium size or larger.

Inferiority Complex. The oscisaa deals one extra die of its weapon’s damage when it hits a creature that is Medium size or larger.

Innate Spellcasting. The oscisaa’s innate spellcasting ability is Charisma. It can innately cast the following spells (spell save DC 12), requiring no material components:

At will: mage armor (self only), speak with animals

Spellcasting. The oscisaa is a 3rd-level spellcaster. Its spellcasting ability is Charisma (spell save DC 12, +4 to hit with spell attacks). It regains its expended spell slots when it finishes a short or long rest. It knows the following warlock spells:

Temperamental. If the manpati takes damage it has advantage on attack rolls made against the creature that damaged it until the end of its next turn.

Hit-and-Run. The laicost doesn’t provoke opportunity attacks when it moves out of an enemy’s reach.

Keen Smell. The laicost has advantage on Wisdom (Perception) checks that rely on smell.

Hit-and-Run. The laicost doesn’t provoke opportunity attacks when it moves out of an enemy’s reach.

Keen Smell. The laicost has advantage on Wisdom (Perception) checks that rely on smell.

Mark for Death (Recharge 5-6). The laicost makes a melee weapon attack. Regardless of whether or not the attack hits, until the start of the laicost’s next turn, all of its allies have advantage on their attack rolls against the same target.

I don’t know about you, but my imagination is up and running with these new humanoids. Pretty sure I’m going to use the laicosts right away in my own campaign.

Let me know which one is your favorite down in the comments. The first person to answer and I’ll create 3 new variants for that race.

Don’t be surprised if I create an adventure incorporating one or more of these weenies.