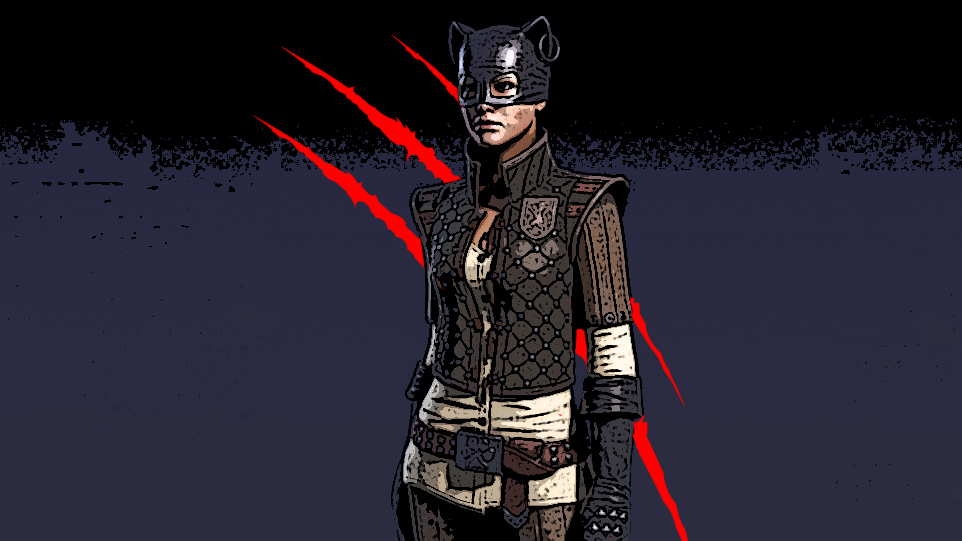 DM DaveLeave a Comment on Stat Anything: Catwoman for Fifth Edition Dungeons & DragonsPosted in Fun Stuff

Continuing my Gotham City meets Waterdeep trend, I’ve created Catwoman for Dungeons & Dragons Fifth Edition. If you haven’t already, be sure to check out the other two I’ve done:

Catwoman was a little easier than Batman and Joker simply because similar designs already exist for swashbuckler/rogue types in Dungeons and Dragons fifth edition. It was simply a matter of tailoring her abilities and features to match those from the comics and movies. Also, I wanted to give her a few features that help her put the one-up on the Bat Knight, who, frankly, is a bit of a mensch in terms of CR.

I thought about going corny and making her a tabaxi, but that seemed kinda boring and a little too “on the nose.” Instead, I took some of the elements of Master Thief (Volo’s Guide to Monster) and tangled it up with the Swashbuckler. Also, the basic fifth edition whip is a little boring, so I gave it some cool secondary abilities.

Seleena Kieyel lived most of her young life in squalor on the streets of Waterdeep. As a teen, she became an entertainer at one of Waterdeep’s premiere brothels, the Alley Cat. Persistence and talent paid off for Seleena, and once the former housemistress retired, Seleena took over her role.

A big part of Seleena’s job was to protect the girls of the Alley Cat. In her spare time, she traded her time for combat training with the rogues and mercenaries that frequented her establishment.

Disgusted by the attitudes of the Waterdavian nobles and their treatment of the lower class, Seleena took matters into her own hands, donning a black leather mask and taking on the role of The Cat.

Now, the Cat robs from the rich and gives back to the poor, sending a message that the nobles’ cruel plutocratic ways will avoid consequence no longer. In addition, she keeps the women of Waterdeep’s alleys safe, protecting them from the baser aggressions of the more dastardly gentlemen callers.

Cunning Action. On each of her turns, Seleena can use a bonus action to take the Dash, Disengage, or Hide action.

Suave Defense. While Seleena is wearing light or no armor and wielding no shield, her AC includes her Charisma modifier.

Multiattack. Seleena makes five attacks: four with her claws and one with her whip.

Whip. Melee Weapon Attack: +7 to hit, reach 10 ft., one target. Hit: 6 (1d4 + 4) slashing. If the target is a creature, Seleena can choose one of the following additional effects:

Uncanny Dodge. Seleena halves the damage that she takes from an attack that hits her. She must be able to see the attacker.

Here is an extra feat for you to use in your fifth edition Dungeons & Dragons campaigns. Just not commercially.

You are an expert with a whip and can use it to disable your opponents in various ways.

Thank you for reading!

I always have a great time when I stat up characters like this. Plus, it gave me a great idea for a new feat: whip mastery, which is now free for you to use.

Next up with Batman, I think I’m going to stat up another one of my favorite villains: the Penguin.