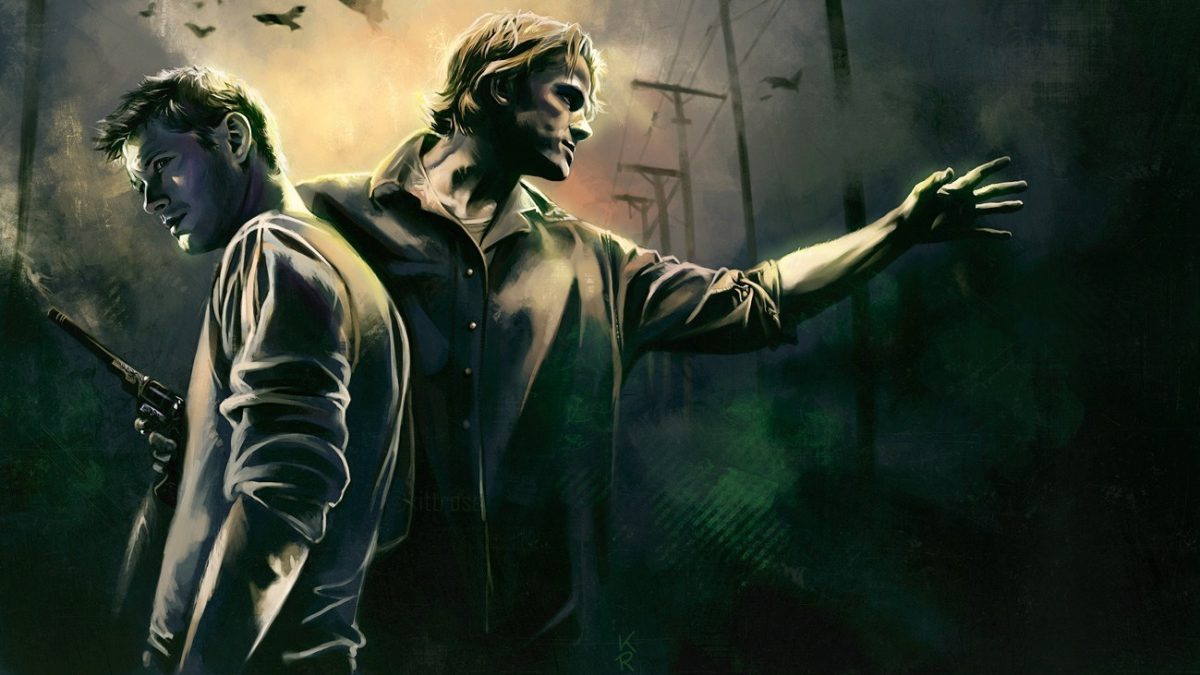 Okay, I caved. Here’s the hunter class based on the TV show Supernatural. Yes, I’m fully aware it’s a reskinned and altered UA ranger, but hey–that’s basically what a hunter is, right?

A hunter is a being, usually a human, who hunts down the supernatural and saves people from monsters, demons, ghosts, and other creatures.

As a hunter, you gain the following class features.

Hit Points at Higher Level: 1d10 (or 6) + your Constitution modifier per hunter level after 1st

Beginning at 1st level, you have significant experience studying, tracking, hunting, and even talking to a certain type of enemy. Choose a type of favored enemy: beasts, fey, humanoids, monstrosities, or undead. You gain a +2 bonus to damage rolls with weapon attacks against creatures of the chosen type. Additionally, you have advantage on Wisdom (Survival) checks to track your favored enemies, as well as on Intelligence checks to recall information about them. When you gain this feature, you also learn one language of your choice, typically one spoken by your favored enemy or creatures associated with it. However, you are free to pick any language you wish to learn.

You are a master of living off the grid and staying away from the prying eyes of mundanes. This grants you the following benefits:

While you are wearing no armor, your AC equals 10 + your Dexterity modifier + your proficiency bonus. You can wield a shield and still gain this benefit.

At 2nd level, you adopt a particular style of fighting as your specialty. Choose one of the following options. You can’t take a Fighting Style option more than once, even if you later get to choose again.

With this fighting style, you gain the following benefits:

When you are wielding a melee weapon in one hand and no other weapons, you gain a +2 bonus to damage rolls with that weapon.

You gain a +2 bonus to attack rolls you make with ranged weapons.

By the time you reach 2nd level, you have learned powerful rituals and incantations similar to those used by witches, wiccans, and Men of Letters. See chapter 10 of the PHB for the general rules of spellcasting and the end of this article for the hunter spell list.

The Hunter table shows how many spell slots you have to cast your spells of 1st level and higher. To cast one of these spells, you must expend a slot of the spell’s level or higher. You regain all expended spell slots when you finish a long rest. For example, if you know the 1st-level spell animal friendship and have a 1st-level and a 2nd-level spell slot available, you can cast animal friendship using either slot.

Spell save DC = 8 + your proficiency bonus + your Wisdom modifier

In addition, if you read, hear or see an unusual news article, rumor, or story, you can immediately intuit whether or not it is the work of one of your favored enemies.

At 3rd level, you choose to emulate the ideals and training of a hunter archetype: the Stalker or Warrior, both detailed at the end of the class description. Your choice grants you features at 3rd level and again at 7th, 11th, and 15th level.

Beginning at 8th level, you can take the Disengage action as a bonus action on each of your turns.

Starting at 10th level, you gain proficiency in saving throws of an ability score of your choice.

Starting at 14th level, you can use the Hide action as a bonus action on each of your turns.

At 18th level, when you roll a saving throw and fail, you can choose to succeed instead. Once you use this feature, you can’t use it again until you finish a long rest.

At 20th level, you become an unparalleled hunter. Once on each of your turns, you can add your Wisdom modifier to the attack roll or the damage roll of an attack you make. You can choose to use this feature before or after the roll, but before any effects of the roll are applied.

No two hunters track their prey the same way. However, there are certain molds that many hunters find themselves falling into, known as archetypes. Two such archetypes, Stalker and Warrior are detailed below.

Stalkers are at home in the darkest places: in gloomy alleyways, abandoned subways systems or sewer lines, and wherever else the light dims. Most folks enter such places with trepidation, but a Stalker ventures boldly into the darkness, seeking to ambush threats before they can reach the broader world.

Starting at 3rd level, you learn an additional spell when you reach certain levels in this class, as shown in the Stalker Spells table. The spell counts as a hunter spell for you, but it doesn’t count against the number of hunter spells you know.

At 3rd level, you master the art of the ambush. On your first turn during combat, you gain a +10 bonus to your speed, and if you use the Attack action, you can make one additional attack. You are also adept at evading creatures that rely on darkvision. Such creatures gain no benefit when attempting to detect you in dark and dim conditions. Additionally, when the DM determines if you can hide from a creature, that creature gains no benefit from its darkvision.

At 7th level, you gain resistance to psychic damage.

Starting at 11th level, once on each of your turns when you miss with an attack, you can make another attack.

At 15th level, whenever a creature attacks you and does not have advantage, you can use your reaction to impose disadvantage on the creature’s attack roll against you. You can use this feature before or after the attack roll is made, but it must be used before the outcome of the roll is determined.

Some hunters seek to master weapons to better protect civilization from the terrors of the unknown. Practitioners of the Warrior Archetype learn specialized fighting techniques for use against the direst threats, from bloodthirsty vampires and hordes of werewolves to towering golems and terrifying demons.

At 3rd level, you gain one of the following features of your choice.

Colossus Slayer. Your tenacity can wear down the most potent foes. When you hit a creature with a weapon attack, the creature takes an extra 1d8 damage if it’s below its hit point maximum. You can deal this extra damage only once per turn.

Giant Killer. When a Large or larger creature within 5 feet of you hits or misses you with an attack, you can use your reaction to attack that creature immediately after its attack, provided that you can see the creature.

Horde Breaker. Once on each of your turns when you make a weapon attack, you can make another attack with the same weapon against a different creature that is within 5 feet of the original target and within range of your weapon.

At 7th level, you gain one of the following features of your choice.

Escape the Horde. Opportunity attacks against you are made with disadvantage.

Multiattack Defense. When a creature hits you with an attack, you gain a +4 bonus to AC against all subsequent attacks made by that creature for the rest of the turn.

Steel Will. You have advantage on saving throws against being frightened.

At 11th level, you gain one of the following features of your choice.

Spray and Pray. You can use your action to make a ranged attack against any number of creatures within 10 feet of a point you can see within your weapon’s range. You must have ammunition for each target, as normal, and you make a separate attack roll for each target.

Whirlwind Attack. You can use your action to make melee attacks against any number of creatures within 5 feet of you, with a separate attack roll for each target.

At 15th level, you gain one of the following features of your choice.

Stand Against the Tide. When a hostile creature misses you with a melee attack, you can use your reaction to force that creature to repeat the same attack against another creature (other than itself) of your choice.

Uncanny Dodge. When an attacker that you can see hits you with an attack, you can use your reaction to halve the attack’s damage against you.

The hunter spells are presented in alphabetical order by the name of the spell.

Protection from Evil and Good

The following spells are available to Hunters, Priests, Witches, and Wizards.

You touch up to 4 nonmagical weapons. Until the spell ends, the weapons become magic weapons with a +1 bonus to attack rolls and damage rolls. In addition, the weapon deals an additional 1d8 radiant damage if it hits an undead or fiend.

Components: V, S, M (chalk, a sprinkling of holy water, rare incense, and a powdered ruby worth at least 500 gp)

Using chalk, you draw a 5-foot-radius circle on a surface that acts as a trap for a specific type of creature. Choose one or more of the following: celestials, elementals, fey, fiends, and undead. When the chosen creature enters the area or any area no more than 10 feet directly above or below the circle for the first time on a turn, the creature must succeed on a Charisma saving throw or become trapped.

While within the trap, the creature has disadvantage on Intelligence, Wisdom, and Charisma saving throws against spells and magic effects. A creature inside the circle can’t leave it by nonmagical means. A creature within the trap can still make weapon attacks as long as its target is within range. If a creature tries to cast a spell, it must first make a Charisma saving throw. On a successful saving throw, the creature casts the spell. This includes any magic used to exit the trap such as teleportation or interplanar travel. On a failed saving throw, the spell takes no effect and is wasted.

The spell’s area can’t overlap with another outsider’s trap spell. The effect can penetrate nonmagical organic material such as leather, woven blankets, or rugs but no more than 1 inch thick. Any other material over the circle such as wood, dirt, stone, or metal blocks the spell’s effect.

The spell remains until the circle is broken by any creature that is not trapped by the spell, or if the creature uses a spell or feature that damages the surface that the circle is drawn on, such as the earthquake spell.