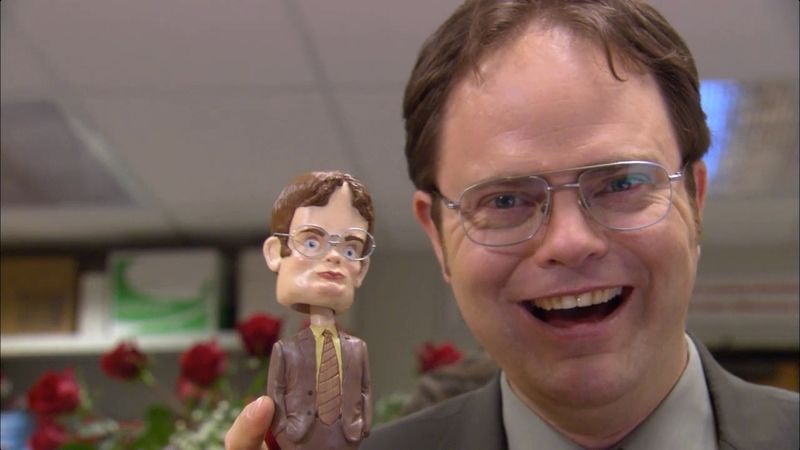 Earlier today, an image of the cast of the US Office made its way around the web. It had a majority of the main cast reunited for brunch and was only missing a few folks, notably John Krasinski and Steve Carrell.

I, like many 30-somethings that live in the US, have probably watched The Office start to finish five or six times. I love the show. And even though it’s been off the air for about 5 years, a lot of the stories still resonate with me.

I’m also a big Rainn Wilson fan. Rainn, of course, played Dwight Schrute, one of the most memorable characters in film and television history.

As a dude that wears glasses and loves nerd culture, I frequently get compared to Dwight from co-workers, friends, and even my wife. So, obviously, I feel a connection.

But Rainn is so much more than Dwight. His life is crazy awesome! He lived most of his life in Central America and was a theater actor before landing the role of Dwight. He’s been in all sorts of wild movies, too, from Rob Zombie’s House of a Thousand Corpses (true story) to the voice of Gargamel in the Smurfs movies.

Today, he can be seen on the new Star Trek Discovery television show. He’s also one of the Soulpancake’s co-founders. Remember Kid President? That was Rainn!

I follow him and Soulpancake on Facebook and I’ve read his memoir, The Bassoon King. He’s a farmer (in real life), a nerd, and an all-around pretty cool guy.

And that’s why I want to play D&D with him.

How will DMDave play Dungeons & Dragons with Rainn Wilson?

Rainn is a D&D nerd. That probably doesn’t surprise you, right? He grew up playing D&D in the ’80s and even went to gaming conventions. Does he play Fifth Edition? Unknown. But I’m sure I could teach him! Haha

Regardless, I’d love a chance to chat with the guy, do Dungeon runs, and potentially torment his character with one of the awful monsters I’ve cooked up.

Here’s how you can help!

Now, Rainn’s a famous guy. So this is all easier said than done. But I have a (half-assed) plan.

That’s where you come in. I need your help!

For easy sharing, just click one of the buttons below this article!

We get enough likes and shares and I’m sure that we can get him or one of his agents to take notice. What’s the worst that could happen? He could just tweet or reply “no.” Or just not say anything. Such is life!

But if he says yes, that means I get to share exclusive content of Rainn Wilson playing Dungeons & Dragons here on the website. And hell… maybe I’ll even let you all help me create the dungeon I run him through.

Maybe even a contest to be one of the players along? Yeah, that would definitely work.

We might even raise money for one of his charities. That could be fun, too!

Thanks to everyone who follows and participates!

It’s hard to believe that 2018 is almost over. And it’s even harder to believe that just a few months ago I created this blog as a way to dream up some cool monsters for Dungeons & Dragons Fifth Edition. Hell, I was already cranking out the content for my Saturday campaign, so it was a neat and easy way for me to keep track of it. Turns out, people really liked it.

So a huge thank you to everyone that’s been following! You guys are awesome.

Hopefully, together, we can reach this dream goal. If it works out, then obviously I’ll reward you all accordingly with more great, FREE content.

Thanks a million and see you soon!