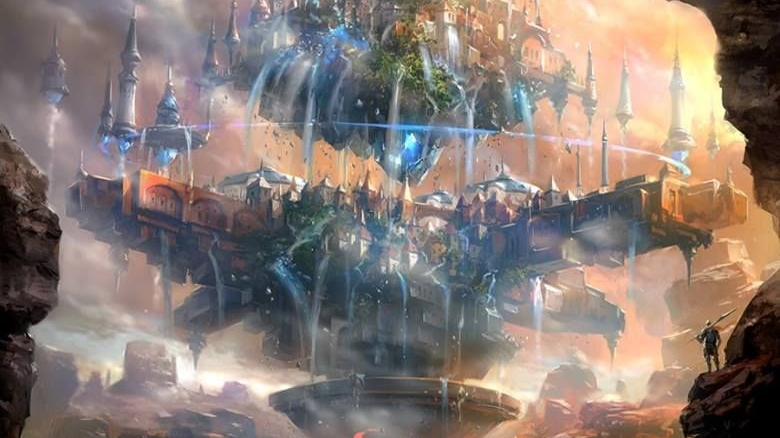 Thanks so much to everyone who entered the campaign setting contest! The final tally is in. Here is how it played out:

In first place was the suggestion from Instagram user @stephenbogle03. I have tentatively named the setting “Shattered Lands” but will probably change it to something more appropriate.

A world which has been consumed by the void, a seemingly endless roiling blackness in which the laws of reality are warped if applied at all. None who go into it come out. As such, the great nations have taken to the skies in massive cities, which have dozens of levels upon which entire civilizations reside, supported by great engines. The higher levels are the wealthier areas, while the underbelly of the city is literally on the bottom. Travel is possible by airships of all sizes, but not everything is peaceful; some of the cities are encounter difficulties ranging from food shortages to failing engines, so war seems almost inevitable.

Although this is the winning entry, I have to say that I liked the other top entries so much that I’ll also be looping these into the campaign setting, with the presence of those thematic elements dependant on how well it did in the poll.

In other words, in addition to massive cities in the sky and the beckoning void below, there will also be:

What to expect from this campaign setting.

Over the next three months, I’ll be creating material for this setting. The content will roughly follow the flow of the latest Ravnica release. This content will include:

I estimate the content to come out to 100 pages or more. That’s roughly 80,000 words of new, Fifth Edition content.

This is an exciting endeavor, and one of the things that I wanted to do once this blog started taking off.

A huge thanks to my patrons, the folks over on Instagram, and everyone who helped come up with these ideas.

If you’d like to contribute or participate in some way (art, story notes, etc) let me know via Instagram DM. I can’t promise that I’ll take every submission that comes my way, but I’ll definitely check out what you’ve got to offer and give you a shout out when and where I can.