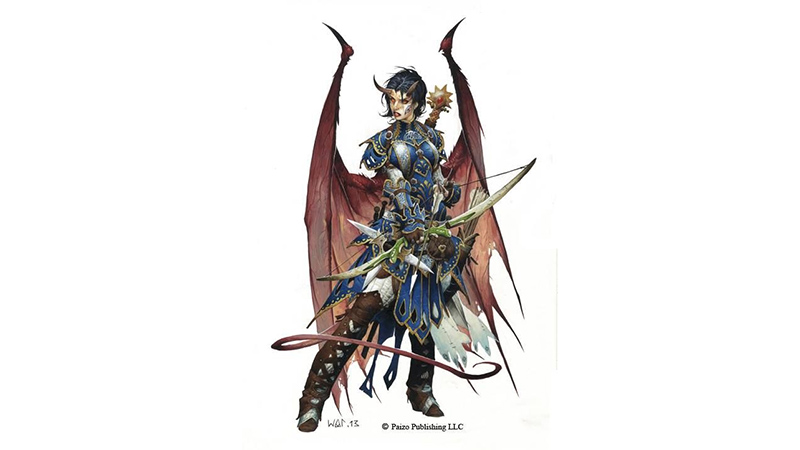 Jillian is part of the Bzallin’s Blacksphere adventure. The original Jillian was a CR 10 challenge, but I realized that I probably needed to beef her up a bit.

Edit: I realize that I actually made her too low of a challenge at 16. So I had to beef her up even more to CR 21.

Here are her new statistics:

Special Equipment. Jillian is wearing a ring of protection and scale mail +1, both included in her AC. She wields the spear of souls which acts as a spear +1 and can trap a soul in it (see below).

Alert. Jillian has advantage on initiative saving throws, she can’t be surprised while she is conscious, and other creatures don’t gain advantage on attack rolls against her as a result of being unseen.

Legendary Resistance (3/day). If Jillian fails a saving throw, she can choose to succeed instead.

Regeneration. While Jillian has a soul trapped in her spear, she regains 10 hit points at the start of her turn. Jillian dies if she starts her turn with 0 hit points.

Trap Soul (1/day). If Jillian hits a creature with the spear of souls when using it as a melee weapon, she can immediately use her bonus action to trap a creature’s soul within the spear. The target must make a DC 15 Charisma saving throw. On a failed saving throw, the creature dies and its soul is pulled into the spear. Until the soul leaves the spear, the creature cannot be revived through magical means. The soul remains in the spear until Jillian (or any creature that is attuned to the spear) uses its bonus action to release the creature’s soul from the spear, the spear is broken, or another creature uses a wish spell to free the soul. If the soul is not freed within 24 hours of becoming trapped, it is destroyed and can only be brought back by means of a wish spell or similar magic. The spear can only hold one soul at a time.

Fiendish Charm. One humanoid Jillian can see within 30 feet of her must succeed on a DC 20 Wisdom saving throw or be magically charmed for 1 day. The charmed target obeys Jillian’s spoken commands. If the target suffers any harm from Jillian or another creature or receives a suicidal command from Jillian, the target can repeat the saving throw, ending the effect on itself on a success. If a target’s saving throw is successful, or if the effect ends for it, the creature is immune to Jillian’s Fiendish Charm for the next 24 hours.

Move. Jillian moves up to her full movement.

Blitz (Costs 2 Actions). Jillian makes one melee weapon attack against each creature of her choice within 5 feet of her.

Summon Demon (Costs 3 Actions). A shadow demon appears in an unoccupied space within 30 feet of Jillian and remains until destroyed. Shadow demons summoned in this way roll initiative and act in the next available turn. Jillian can have only one shadow demon summoned by this ability at a time.