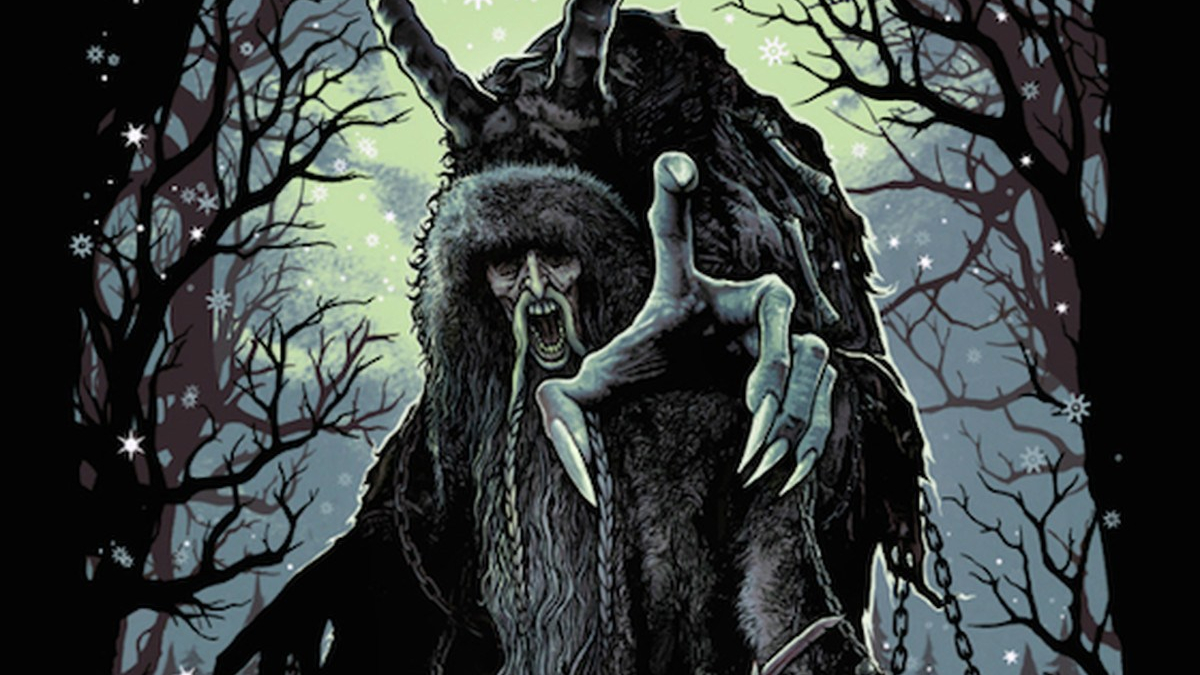 Earlier, I asked folks on Instagram who I should create for Dungeons & Dragons Fifth Edition. And I got back a lot of cool ideas. But the one that I seemed to get over and over and over again was Santa’s demon-buddy Krampus.

In Central European folklore, Krampus is a horned, anthropomorphic figure described as “half-goat, half-demon”, who, during the Christmas season, punishes children who have misbehaved, in contrast with Saint Nicholas, who rewards the well-behaved with gifts. The origin of the figure is unclear; some folklorists and anthropologists have postulated it as having pre-Christian origins.

Although Krampus appears in many variations, most share some common physical characteristics. He is hairy, usually brown or black, and has the cloven hooves and horns of a goat. His long, pointed tongue lolls out, and he has fangs.

Krampus carries chains, thought to symbolize the binding of the Devil by the Christian Church. He thrashes the chains for dramatic effect. The chains are sometimes accompanied with bells of various sizes. Of more pagan origins are the Ruten, bundles of birch branches that Krampus carries and with which he occasionally swats children. The Ruten may have had significance in pre-Christian pagan initiation rites. The birch branches are replaced with a whip in some representations. Sometimes Krampus appears with a sack or a basket strapped to his back; this is to cart off evil children for drowning, eating, or transport to Hell. Some of the older versions make mention of naughty children being put in the bag and taken away. This quality can be found in other Companions of Saint Nicholas such as Zwarte Piet.

Legendary Resistance (3/day). If Krampus fails a saving throw, he can choose to succeed instead.

Magic Resistance. Krampus has advantage on saving throws against spells and other magical effects.

Grab. Melee Weapon Attack: +8 to hit, reach 5 ft., one creature. Hit: the target is grappled by Krampus (escape DC 14). If Krampus grapples the target, he can use his bonus action to stuff the creature into his bag.

Ruten. Melee Weapon Attack: +8 to hit, reach 5 ft., one target. Hit: 15 (2d10 + 4) slashing damage. If the target is a creature, it must succeed on a DC 16 Constitution saving throw or its movement is halved until the end of its next turn.

Chain Rattle. Each creature of Krampus’ choice that is within 60 feet of him and can hear him must succeed on a DC 17 Wisdom saving throw or become frightened for 1 minute. A creature can repeat the saving throw at the end of each of its turns, ending the effect on itself on a success. If a creature’s saving throw is successful or the effect ends for it, the creature is immune to Krampus’ Chain Rattle for the next 24 hours.

Stuff. Krampus makes a grab attack against a Medium or smaller target he is grappling. If the attack hits, the target is stuffed in Krampus’ bag, and the grapple ends. While stuffed, the target is blinded and restrained, and it has total cover against attacks and other effects outside the bag. At the start of each of the character’s turns, it can attempt to climb out of the bag by making a successful DC 17 escape check. On a successful check, the target falls prone in a space within 5 feet of the bag. If the bag is destroyed, all captured creatures within are destroyed along with it and can only be brought back to life with a wish spell or similar magic.

Move. Krampus moves up to his speed without provoking opportunity attacks.