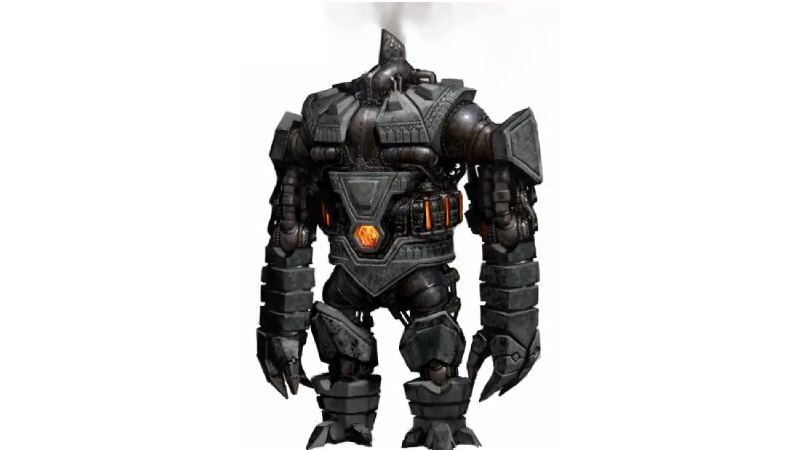 The mek was a creature appearing in second edition Dungeons & Dragons. What follows is the information taken directly from the second edition Monstrous Manual, followed by the updated stats for fifth edition.

What is a mek?

Meks (possibly a derivative of the word “mechanical”) are huge metallic creations, fabricated by a long-dead race of inhuman, insectlike sorcerers. Most meks resemble their creators, having barrel-like chests; and long, barbed, double-jointed arms and legs. However, meks resembling giants, lizards, and other creatures have been found, too.

Meks usually serve as guardians and only attack beings who intrude into the area they protect. However, characters might encounter one of the few wild meks that wander as marauders.

These unintelligent creatures do not communicate but follow the simple, verbal orders their creators gave them long ago. Rumors state that on rare occasions, a powerful individual has learned how to usurp control of a mek – at least for a while.

How do meks fight?

A mek responds to motion; it cannot see a creature that remains perfectly still. The best defense against a wandering mek is to remain stock still, out of its path, and wait for it to pass by.

Meks attack by striking with their heavy, metallic fists. So great is a blow from one of these monstrosities that a creature bit by both fists can knock a creature off its feet and stun it. Meks are also known to grab their opponents and hurl them away.

In addition, a mek can exhale a cloud of paralyzing gas.

Meks were created long ago to guard ancient insectoid wizards and their underground strongholds. (A few of these fortresses lie on the surface, in remote, desolate areas.) Meks encountered within ancient strongholds served a master at the time of their entombment. Most of the time, the creature’s final order was to guard a particular chamber, item, or even an entire floor. In rare cases, its master ordered it to kill anyone who entered the stronghold. Sometimes the elements expose a buried stronghold, and a mek manages to escape and wander the countryside, attacking most creatures it encounters and leveling any structures in its path. Such meks apparently had no master at the time they were sealed up in the stronghold. These masterless creatures, lacking in magical compulsions and safeguards, prove dangerous.

The secret of creating meks has been lost – for now.

Except for the ruin the few wild, uncontrolled meks inflict on the landscape, most meks have no effect on their immediate environment. Some mages and sages speculate that a relationship exists between meks, iron golems, and Apparatuses of Kwalish.

Freeze. If the mek takes cold damage, it partially freezes. Until the end of its next turn, its speed is reduced by 20 feet, it can’t take reactions, and it can’t make more than one attack on a turn. In addition, the mek can take either an action or a bonus action its turn, not both.

Immutable Form. The mek is immune to any spell or effect that would alter its form.

Motion Sense. The mek can only see movement and any creature that remains motionless while in the mek’s line of sight is invisible to it. In order to remain motionless, a creature must succeed on a DC 10 Dexterity check.

Paralyzing Gas. As a bonus action, the mek can exhale an invisible gas that spreads out 10-feet in all directions around it. Each creature in the area must make a DC 18 Constitution saving throw or become paralyzed for 1 minute. A creature can repeat its saving throw at the end of its turn, ending the effect on itself with a success. If a creature’s saving throw is successful or the effect ends for it, the creature is immune to the mek’s Paralyzing Gas for the next 24 hours. The gas disperses at the start of the mek’s next turn.

Fist. Melee Weapon Attack: +10 to hit, reach 10 ft., one target. Hit: 24 (4d8 + 6) bludgeoning damage. If the target is a creature, the mek can choose one of the following additional effects:

Hope you liked this entry. Be sure to check out the Monstrous Manual for more cool stuff. And if you aren’t already, sign up to follow along with the blog by entering your email in the box to the right or down in the footer.