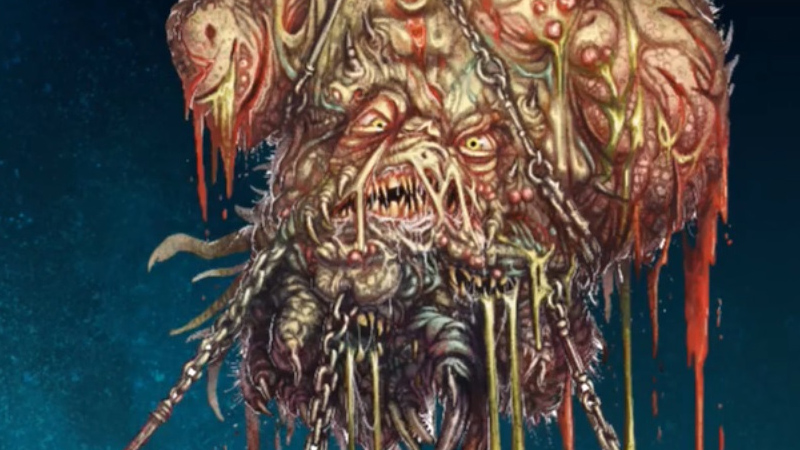 I’m a little late posting this following Keith Ammann’s latest Sibriex tactics post, but it’s been a nutty week (I leave for Mexico on Friday). Anyways, let’s take a look at the Sibriex and see what sort of minions and lair this guy needs.

If you’re not familiar with the sibriex, pick yourself up a copy of Mordenkainen’s Tome of Foes. Basically, the sibriex is a lesser demon factory. It uses an innate warp creature ability to turn souls (and other unfortunate beings) into abyssal wretches or rutterkin, which more or less look like that dude that fell in the toxic waste in the first Robocop movie.

They’re particularly nasty buggers and tough as hell, too, coming in at a solid Challenge Rating 18. With that high of a CR and legendary actions to boot, this makes them minor bosses for a group of 13th-level characters, or a super challenge for characters 11th or 12th. Much of the challenge will depend on how well equipped the party is to handle the sibriex.

Keith covers most of the sibriex’s tactics and strategies in his awesome article which you can read here: sibriex tactics.

What are a sibriex’s weaknesses?

When planning for support, it’s important to create creatures that complement the monster and make up for its shortcomings. Granted, as a high CR legendary creature, the sibriex doesn’t have a ton of disadvantages, but there are a few that should be addressed:

The trouble with giving the ol’ sibriex lots of support monsters is that it’s already a Challenge Rating 18 creature. Adding only two CR 1/4 abyssal wretches to the battle bumps its XP from 20,000 to 40,000 when calculating combat encounter difficulty effectively taking it from a deadly 13th-level encounter to a deadly 17th-level encounter. 17th level is near-legendary for most characters, so the fear of getting turned into an abyssal wretch goes out the window when dealing with PCs at that tier.

If using support monsters, the best options are going to be weenies that act like speed bumps, slowing the characters down so the sibriex can use the full extent of its action economy for a few rounds. Trouble is, any self-respecting cleric is going to have its spirit guardians up and running in order to tear through weenies without hardly noticing them. Spirit guardians deal 13 radiant damage on average on a failed save (which all weenies will probably fail), or 6 on a successful one. That’s with just a 3rd level slot. When wandering the twisting passages of the Abyss, a cleric might even juice up his guardians with a higher slot. So it could be dealing up to 40/20 radiant damage. Might be a waste of a 9th-level slot to do this, but hey… if you’re literally going to “hell”, might as well pull out the big guns, right?

Fortunately, abyssal wretches, the obvious support monster for sibriexes, come with 18 hit points. So unless a cleric rolls better than average, they should be able to tie some characters up. With AC 11 and a +3 to hit with an attack that only deals 5 damage, it ain’t like they’re going to be doing much else.

If a sibriex comes with a squad of 5 abyssal wretches, that’ll keep him from bumping up to the next encounter multiplier. Just be sure to spread them out plenty to avoid getting an area of effect spell or effect dropped on them all at once.

The other option that makes sense fluff-wise, are rutterkin, but with only marginally better attacks and saving throws, the 10x experience cost over the wretches makes them a lousy choice. Five of those will cost you another 4,500 encounter experience. Just not worth it.

TL;DR: what kind of monsters should the sibriex surround itself with?

Here are the monsters I suggest:

No matter where the sibriex lives, it should always have at least 120 feet of distance between itself and any entrances to its lair.

Here are the sibriex’s attacks grouped by range:

This gives us an idea of how to create the sibriex’s lair. It should have one main entrance (for foot traffic) with a veritable minefield of awful terrain and power-nerfing weenies (star spawn grue) between that entrance and the sibriex. Then, a second entrance, probably up in the ceiling directly above the sibriex so it can make quick getaways if it needs to.

Let’s break it all down:

Entrance (150 feet from the sibriex).

Here is where the PC’s will enter. There’s no way in hell (literally) the sibriex will let the PC’s go any further than 30 feet from here without initiating combat first. Chances are that the sibriex is going to lose initiative so it will use its legendary actions in the meantime. It’s going to be most interested in slowing down fast movers/flyers and those with long range abilities, especially rogues. If it doesn’t look like any of the characters are fast moving, then it will use feeblemind to target spellcasters, especially sorcerors, warlocks, clerics and paladins who won’t be able to make the Intelligence saving throw.

It might be worth it to place a star spawn grue or two in suspended cages (and invisible if possible) above this ring, but spaced out enough to keep them from getting blasted with area-of-effect spells.

The sibriex will want the PC’s to make it this far but go no further as it ultimately wants to use its Warp Creature power on any who dare approach. Therefore, difficult terrain here is a good idea here, too. For monsters, keep it light, since you’ll want the limited monster selection to work mostly as a method to slow creatures down in the next couple rings

Anything that is able to get past this zone quickly (like a paladin on a flying mount), is an automatic target for the sibriex and it will use its Squirt Bile to take it down. It won’t waste Squirt Bile on rogues or monks, knowing they can probably evade the attack. If it’s a creature that could easily mess up its weenies (like spirit guardians), it will use dispel magic to shut down lingering powers, or feeblemind to have it lose concentration (and spellcasting abilities altogether).

If you go the star spawn grue route for back up, they work well in this ring, too.

Again, this area should try to slow down any who were able to get past the first ring. Hold monster works in this ring, and it’s the perfect attack for most non-divine melee combatants who have lousy Wisdom saves. Remember: hold monster is a concentration-based spell, which means that it can only do this to one character at a time, so it’s going to make it count.

If rogues manage to get this close and the sibriex can’t see it with its passive Perception, here’s where the sibriex will hold an action for it to come out of hiding then immediately lob hold monster at it. Rogues are a massive danger for the sibriex since they can deal incredible damage to the demon and can reasonably avoid feeblemind and Squirt Bile.

This ring should have more monsters to slow characters down, too, and more difficult terrain (preferably one that’s harder to get around like a moat, or jagged terrain). The darkmantles are a good idea here since they can cast darkness that the sibriex can see through, and they can make life hell on PCs. Multiple darkmantles flanking ensures at least a few will hit.

Being so far from the entrance, any lingering auras and powers should have been dispelled at this point. If any remain, the sibriex must dispel those powers here.

The third ring is still somewhat the same as the second ring. If it wasn’t able to put a halt to any of the tough guys before they got to this point, it now has a new toy to throw at them: command. It will probably use the “flee” command to get them to run back 60+ feet so they can go through the entire barrage again.

If the sibriex has not been able to considerably slow down the characters by this point, (at least 50% of them have made it through the obstacle course) here’s where it should consider escaping upwards to its ceiling exit.

Here’s where things get tough. While Keith thinks the sibriex would be fine with engaging, the truth is that the sibriex only has +6 to hit with its chain.

Charm person won’t work too well thanks to its weakness in affecting hostile creatures. Even with a DC 21, that’s not the kind of risk I think the sibriex would ever take when it’s got way better options for dealing damage in its arsenal.

Here is where its contamination field starts doing its thing. But again, it’s going to have a hard time with Fighters and Barbarians who have strong Con saves that have made it this far. If creatures with great Constitution get this far, the sibriex needs to bail immediately. No way is it going to try its luck with its chain attack or bite against characters designed for melee combat.

I repeat: if a strong melee attacker makes it to the fourth ring, the sibriex will immediately run away.

If the sibriex is caught off guard here, it needs to run away immediately, especially if two or more characters are attacking it. It won’t have enough hit points to survive more than a couple of rounds with attackers in this area, especially if they’ve made Con saves to get past the sibriex’s contamination aura.

The only way I think this would work is if the final ring was over a pit or something difficult to reach the sibriex from, yet it could still hit those on the edges with its chains. Sure, it’d lose its contamination aura’s goodies, but again, when dealing with creatures that get big bonuses to Constitution saving throws, it’s far better off if it just stays out of reach, using held actions and Wisdom-based spells to fend off close attackers.

Hope you liked this!

If you have any questions about how the sibriex works, be sure to leave a comment below. Also, read Keith’s article on Sibriex Tactics on his site, The Monsters Know What They’re Doing.

Finally, help out the blog by sharing this post with others.

Art by Wizards of the Coast, myself (Dave Hamrick, and Shutterstock (used with permission).