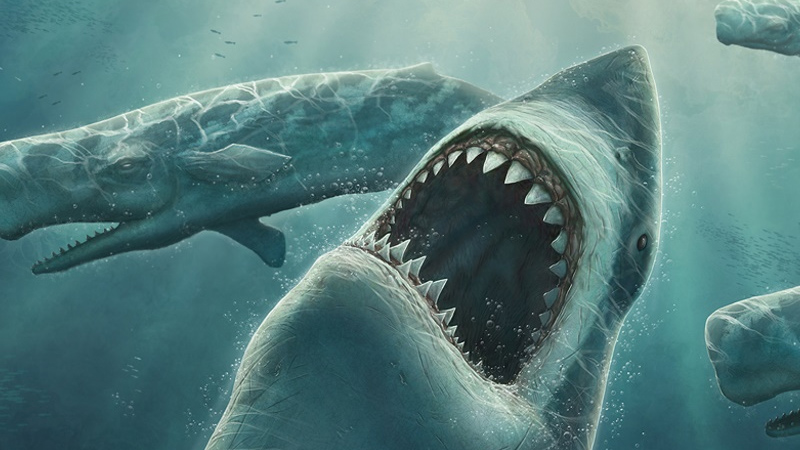 The nawidnehr was a creature appearing in second edition Dungeons & Dragons. What follows is the information taken directly from the second edition Monstrous Manual, followed by the updated stats for fifth edition.

The nawidnehr (NAH-widd-near) is a great shark capable of assuming humanoid form. This powerful marine predator has an insatiable desire to kill. Also called the roaring shark, or sharkwere, the nawidnehr uses its shape-shifting abilities to pursue its prey onto land or insinuate itself into an unsuspecting party for a surprise attack.

In their natural forms, nawidnehrs resemble great white sharks. Nawidnehrs, however, boast much more complex coloration. Specimens dwelling in cooler waters tend toward dark blue, with dots or bands of gray or muddy yellow. Some cool water specimens are brown overall, with red and tan speckles. Warm water specimens tend toward brighter colors – such as blue-green or yellow – with yellow or white spots or stripes. All nawidnehrs have pale underbellies, usually a lighter shade of the prevailing color on their upper bodies.

All nawidnehrs speak the common tongue of humanity. Each individual sharkwere speaks several other demihuman racial tongues as well.

Nawidnehr relish battle. They usually begin attacking with a roar. In shark form, this roar is a thunderous boom that fills a 50-foot cone. Creatures within the cone suffer a shockwave that renders them unconscious.

When in humanoid form, the creature’s roar takes the form of a haunting song which leaves the listener paralyzed with fright.

Sometimes the creature decides not to roar when attacking in natural form. Rather, it lunges at swimmers from below, surprising opponents.

In a melee, a nawidnehr’s jagged teeth and powerful jaws can tear away huge chunks of flesh, producing wounds that bleed profusely. Furthermore, a nawidnehr can swallow a man-sized or smaller creature whole.

Nawidnehrs can transform themselves into any humanoid creature they have seen.

When nawidnehrs use their shape-shifting ability to fool humanoid victims, they try to lure the victim into the water before attacking. They usually leap into the sea, dragging paralyzed victims with them. However, sharkweres will grapple with an opponent and enter the water with a victim in their grasps.

Nawidnehrs hunt victims every waking moment; they can’t stand to leave any other creature in peace. Even the sahuagin fear these powerful predators. Sharkweres swim the oceans, seeking prey as any natural predator. However, these crafty beasts often pose as fishermen, marooned sailors, or friendly natives to attract victims. When encountered under the sea, there is a 40% chance that 2d4+1 hunter sharks accompany a nawidnehr.

Newidnehrs and weresharks hate each other and will attack each other on sight.

Nawidnehrs will happily deplete the fish stocks in an entire area before moving on to ravage another locale. Though they require food, destruction remains their true goal.

Damage Immunities bludgeoning, slashing, and piercing from nonmagical attacks not made with iron weapons

Shapechanger. The sharkwere can use its action to polymorph into a Huge or smaller humanoid it has seen, or back into its true form, a Huge shark. Its statistics other than its size and AC, are the same in each form. Any equipment it is wearing or carrying isn’t transformed. It reverts to its true form if it dies.

Amphibious. The sharkwere can breathe air and water.

Blood Frenzy. The sharkwere has advantage on melee attack rolls against any creature that doesn’t have all its hit points.

Multiattack (Humanoid Form Only). The sharkwere makes two attacks with its scimitar.

Bite (Shark Form Only). Melee Weapon Attack: +11 to hit, reach 5 ft., one target. Hit: 23 (3d10 + 7) piercing damage. If the target is a creature, it is grappled (escape DC 17). Until this grapple ends, the target is restrained, and the sharkwere can’t bite another target.

Roar (Shark Form Only). The sharkwere emits a thunderous roar in a 50-foot cone. Each creature in the area must make a DC 18 Constitution saving throw or fall unconscious. A creature can repeat the saving throw at the end of each of its turns, ending the effect on itself on a success. If a creature’s saving throw is successful or the effect ends for it, the creature is immune to the Sharkwere’s Haunting Song and Roar for the next 24 hours.

Swallow (Shark Form Only). The shark makes one bite attack against a Medium or smaller creature it is grappling. If the attack hits, the target takes the bite’s damage, the target is swallowed, and the grapple ends. While swallowed, the creature is blinded and restrained, it has total cover against attacks and other effects outside the sharkwere, and it takes 14 (4d6) acid damage at the start of each of the sharkwere’s turns. A sharkwere can have only two creatures swallowed at a time. If the sharkwere takes 20 damage or more on a single turn from a creature inside it, the sharkwere must succeed on a DC 16 Constitution saving throw at the end of that turn or regurgitate all swallowed creatures, which fall prone in a space within 10 feet of the sharkwere. If the sharkwere dies, a swallowed creature is no longer restrained by it and can escape from the corpse by using 30 feet of movement, exiting prone.

Hope you liked this entry. Be sure to check out the Monstrous Manual for more cool stuff. And if you aren’t already, sign up to follow along with the blog by entering your email in the box to the right or down in the footer.