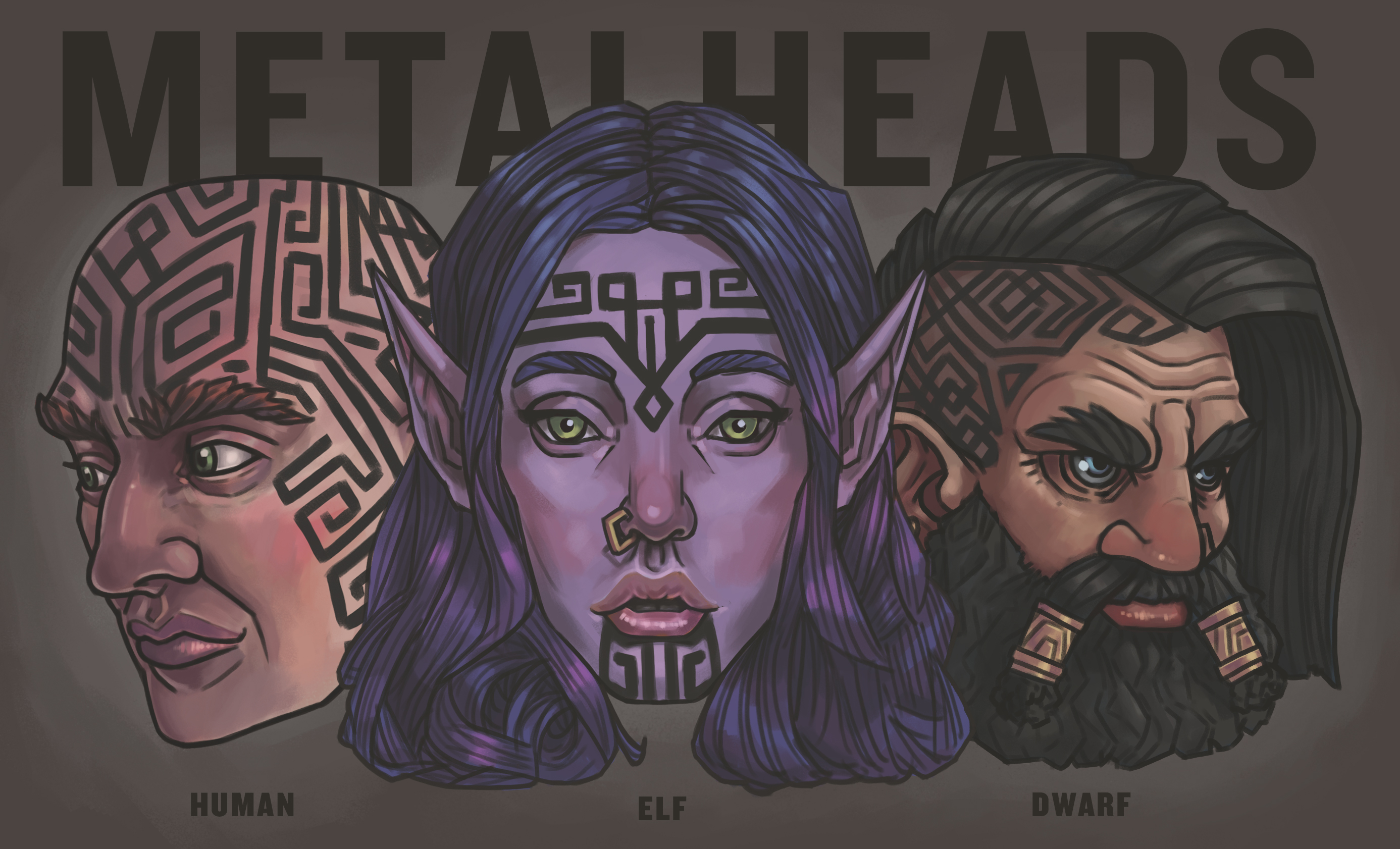 Pretty excited about this article since it’s been a long time coming. Bert Verwaest, the owner of Crosshead Studios and a flippin’ amazing artist, has been kicking around a new set of player options, monsters, and adventures built around the concept of Heavy Metal D&D. Since I’m a big fan of the metal D&D movement (see my love for Death Saves’ merchandise), I jumped at the opportunity. While we may not do a full release right away–as he’s busy AF and I’ve also got The Secret of Forsaken Peak eating up my bandwidth–we just couldn’t wait for our schedules to clear to get started.

In our first go around, I offered to tackle the Metalhead race to set the tone for the world options.

Who are the metalheads?

A proud people, the Metallurians (commonly known as metalheads) are obsessed with the mysterious metal of their mountains, the Heavy Metal. And those who wield the power of Heavy Metal have a unique connection to the arcane.

Many outsiders are surprised to learn that any metal head may have once been a human, elf, dwarf, or any other humanoid race. After all, metal heads are not as much a race as they are conglomerate of ethnic backgrounds bound together by a singular ideology. It isn’t their blood that binds Metalurians, but their common connection to Heavy Metal.

When a Metallurian child reaches adulthood their faces are branded with an elaborate design representing the nation of Metalluria. The brand is more than a permanent scar covering the whole of their faces; they are injected with the Heavy Metal itself, imbuing them with arcane powers. In addition, the presence of Heavy Metal in their physiology causes their hair to grow long at a rapid rate. And a metalhead never goes bald, unless, of course, its tattoo falls over part of its scalp.

Heed the warning
Come the day
They walk among us
Metalhead

No matter what ancestry your metalhead character has, it has the following traits.

Age. Since they come from different ancestries, metalhead ages vary. Every metalhead matures at the roughly same rate as their original race. However, the Heavy Metal brand affects each race differently. Humans with the brand tend to live longer than normal, a few decades past 100 while elven lifespans decrease, living only around 300 years. Most dwarven metalheads live for the same amount of time as a non-branded dwarf.

Alignment. Metalheads respect the Heavy Metal above all, and along with it, the Metallurian nation and its Heavy Metal King. They tend towards lawful but can be of any moral alignment so long as their actions benefit the people.

Darkvision. All metalheads have superior vision in dim and dark conditions, regardless of their ancestry. You can see in dim light within 60 feet of you as if it were bright light, and in darkness as if it were dim light. You can’t discern color in darkness, only shades of gray.

Heavy Metal. The injection of Heavy Metal in your metalhead character’s skin gives you limited arcane properties. You know one of the following cantrips of your choice: spare the dying, message, prestidigitation, minor illusion, or thaumaturgy. Charisma is your spellcasting ability for this spell.

Musically Inclined. You are proficient with one instrument of your choice. In addition, you are immune to becoming deafened.

Languages. You can speak, read, and write Common. Thanks to their varied ancestries, most Metallurians are polyglots but nearly all communicate via the common tongue.

The Heavy Metal stripped you of much of your dwarven ancestry; other than your shorter-than-normal size and natural toughness, you are as much a metalhead as any other Metallurian.

Size. Dwarven metalheads stand between 4 and 5 feet tall and average about 150 pounds. Your size is Medium.

Speed. Your base walking speed is 25 feet. Your speed is not reduced by wearing heavy armor.

Languages. You can speak, read, and write Dwarvish.

Your people were of fey ancestry.

Size. Elven metalheads range from under 5 to over 6 feet tall and have slender builds. Your size is Medium.

Fey Ancestry. You have advantage on saving throws against being charmed, and magic can’t put you to sleep.

Trance. You don’t need to sleep. Instead, you meditate deeply, remaining semiconscious, for 4 hours a day. While meditating, you can dream after a fashion; such dreams are actually mental exercises that have become reflexive through years of practice. After resting in this way, you gain the same benefit that a human does from 8 hours of sleep.

Languages. You can speak, read, and write Elven.

You were born a human but converted to metalhead at a young age.

Ability Score Increase. Two different ability scores of your choice other than Charisma increase by 1.

Size. Human metalheads are the same size as humans, ranging from 5 to 6 feet tall. Your size is Medium.

Skills. You gain proficiency in two skills of your choice.

Languages. You can speak, read, and write one extra language of your choice.

Bert and I will continue to create content regarding this unique world. If you like the concepts and enjoy our content and art, be sure to share it so the world can see it. Just CLICK one of the social media buttons below.