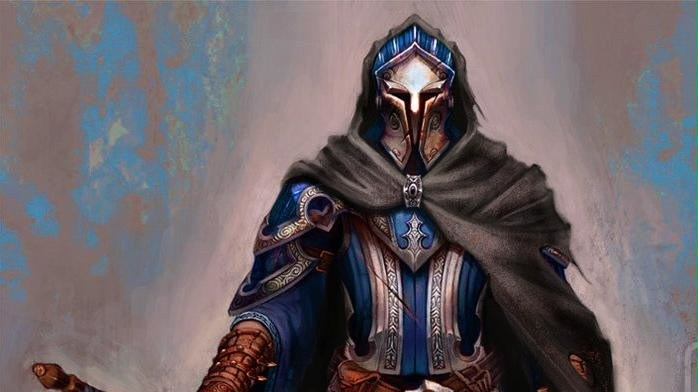 I was working on the Gambler archetype when I got stumped, so instead, I decided to turn to one of the bonus subclasses that I offered up recently during an Instagram contest. Basically, I shared an image of a masked rogue with Instagram and asked everyone to name the class. I got back, like… over 300 replies!

But the one that stuck out the most was sort of a cross between a rogue and a paladin, something you don’t see often. A divine assassin, if you will.

Seems like a pretty simple build all around. Let’s hop to it.

Somehow, this build turned into a tanking rogue. And I kinda dig it. The first part of the build was super simple: tenets, spells, boom. Paladin Rogue. The spells work great for a rogue, too, since the 3rd level powers of rogues are almost always about improved action economy choices, especially for the bonus actions. And all paladin spells are bonus actions.

9th was a pain. I had the worst writer’s block with it. I knew I wanted this rogue to be the type that got up close and personal instead of the typical “hang back and hide and shoot” rogue, so that’s why 13th was the mob scrapper feature. Once that was in place, I went back to 9th and improved its Uncanny Dodge by allowing it to shrink damage against it using spell slots much in the same way pallies can add damage. After all, does the rogue really need to deal any more damage than it already does? But since it gets advantage when its surrounded, I wanted a way that it could survive without getting crushed, hence the bonus to Uncanny Dodge.

Finally, came In Virtute Dei, which was more of a mathematical problem than a creative problem. 17th level rogue powers are almost always about dealing insane damage in some form or another. So that’s what I did, too.

This one is going to be a little controversial and some people may, at first glance, assume it’s overpowered. But if you check the math, you’ll see that not only is not overpowered but in a way, it’s actually a little underpowered.

Here is how I calculated the bonus for In Virtute Dei. The assassin’s death strike works whenever a creature is surprised and allows a saving throw or the creature takes double damage. The assassin has advantage on creatures that haven’t taken a turn, which allows it an 84% chance to hit. Then, there’s a 60% chance that the creature will fail its Constitution save. An assassin at that level armed with a light crossbow will deal 41 damage with a sneak attack. If the creature is surprised (which it is in this situation) that’s another 77 damage. And when the creature fails its save, that’s another 77 damage, for a grand total of 154 damage (holy shit!) which the rogue has a 50.4% chance of doing. So that’s virtual damage of about 77. Still with me? 🙂

Okay, now let’s compare that to the inquisitive rogue and its Eye for Weakness power. At 17th level, if the rogue’s got a creature with its Insightful Fighting feature it gets to deal an extra 3d6 sneak attack damage. That’s a total of 51.5 damage. The inquisitive rogue will have a 60% chance of this going off, so that’s virtual damage of 30.90. In a lot of ways, this is actually better than the assassin’s chance to deal massive damage since the inquisitive rogue gets to nail its target with these special sneak attacks over and over again so long as the creature is “marked.” Of course, it’ll take 2.49 rounds to deal the same damage as the assassin. From a design standpoint, I’d take that as the designers saying that every 2-3 combats the assassin is likely to get surprise on its enemies, or at least should. There are supposed to be roughly 7 combats per day, so an assassin gets to surprise and death strike 3 times per day.

I swear this will make sense in a minute.

Therefore, I decided that simply marking the creature with the pal-op’s Mark Channel Divinity was enough to deal double damage. Here is why. If the paladin operative hits with an attack with advantage (either from hiding or using its mob scrapper feature), it has an 84% chance of hitting. Now, the mark is limited to only two uses per day, but as we saw in the math above, an assassin using its death strike will get to uses its death strike power 3 times per day. That’s a total of 231 damage dealt by death strikes. If we divide that by two, we come up with 115.5 damage; that’s the target damage number for In Virtute Dei. Now, we need to divide the chance to hit into it: that leaves us with 137.5 damage. We know our light crossbow will deal 9.5 damage and the 17th level sneak attack will deal another 30.5, so that’s 41 points of damage accounted for. Also, it’s likely that a staggering smite or similarly powerful smite will get tossed in, dealing another 4d6 or 14 damage. That’s a total of 55 damage. I think we can play it safe by simply allowing marked attacks deal double damage on a hit, giving it 110 damage. The last thing to consider here is that there is a high chance of a crit with an attack that has advantage, 9.75% to be exact. On a crit, a Sneak Attack with a staggering smite would deal a whopping 206 damage. Multiplying the extra crit damage that’s 9.36. Thus, In Virtute Dei will deal a virtual 119.36 on a hit. I just realized that I did my math wrong; I was thinking the subclass gets two Channel Divinities and not one. To account for this, I’ve given the subclass a second channel divinity when it hits 18th level.

Now, despite showing all this math, some will still scream “OP!!!” but when this is compared to the Death Strike or Eye for Weakness capstone, it’s actually marginally weaker than both. But hey… it seems cool AF, right?

At 3rd level, a rogue gains the Roguish Archetype feature. The following Paladin Operative option is available to a rogue, in addition to those normally offered.

When a church or cult needs to deal with an issue that’s outside of its normal portfolio, they turn to paladins. However, most paladins are rather straight forward, acting big and bold; to them, all the world is a nail and they are the hammer. Sometimes, more subtlety is needed. That’s where the paladin operatives come in.

Part divine emissary and part assassin, paladin operatives are avowed members of the church that use the shadows and silence to deal with the church’s dirty deeds.

Tenets of the Operative

Like traditional paladins, when you choose this archetype at 3rd level, you must take an oath before you set upon your holy path.

Vow of Silence. Words are powerful. And I must wield that power responsibly. Therefore, I am nearly always silent except when I invoke my god.

Separate Entity. While I am tasked by the church, I am not officially a member of the church. I work alone, and should I be captured, the church cannot and will not assist me.

Extreme Measures. Sometimes, the only solution is the final solution. I cannot be afraid to dole out death to those I’ve targeted.

No Attachments. I can never let myself get attached to anything that I am not willing to walk away from in 30 seconds flat if I feel the heat around the corner.

When you reach 3rd level, you gain the ability to cast spells. See chapter 10 of the PHB for general rules of spellcasting and chapter 11 for the paladin spell list.

Preparing and Casting Spells. The Paladin Operative Spellcasting table shows how many spell slots you have to cast your spells of 1st level and higher. To cast one of these spells, you must expend a slot of the spell’s level or higher. You regain all expended spell slots when you finish a long rest.

You prepare the list of paladin spells that are available for you to cast, choosing from the paladin spell list. When you do so, choose a number of paladin spells equal to your Charisma modifier + your proficiency bonus (minimum of one spell). The spells must be of a level for which you have spell slots.

You can change your list of prepared spells when you finish a long rest. Preparing a new list of paladin spells requires time spent in prayer and meditation: at least 1-minute per spell level for each spell on your list.

Spell save DC = 8 + your proficiency bonus + your Charisma modifier

Spellcasting Focus. You can use a holy symbol as a spellcasting focus for your paladin spells.

Beginning at 18th level, you can use your Channel Divinity twice between rests.

Mark of the Operative. As a bonus action, you can magically mark a creature you can see within 30 feet of you, using your Channel Divinity. You gain advantage on your next attack roll against the marked creature. The mark fades at the end of your next turn or if the creature drops to 0 hit points or falls unconscious.

Divine Assistance. When you make a Dexterity (Sleight of Hand) check or a Dexterity check using thieves’ tools, you can use your Channel Divinity to gain a +10 bonus to the roll. You make this choice after you see the roll, but before the GM says whether the check succeeds or fails.

Starting at 9th level, when you use your Uncanny Dodge feature to half an attack’s damage you can expend a spell slot to further reduce the damage against you. The damage you reduce is 2d8 for a 1st-level spell slot, plus 1d8 for each spell level higher than 1st, to a maximum of 5d8. The damage is further reduced by 1d8 if it is from an undead or a fiend.