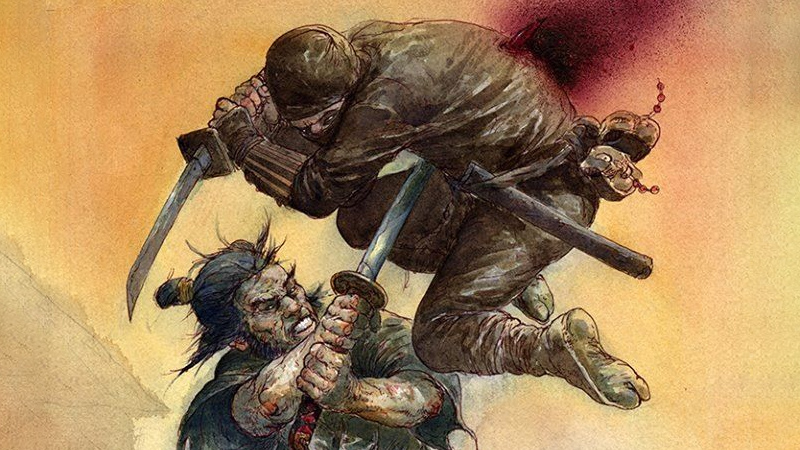 Tomorrow, my PCs are fighting an entire clan of ninjas. The scene? An inn/restaurant, of course.

The ninjas will come in five waves:

There you have it: 77 members of the Du Clan attacking my PCs. Of course, I fully plan on having the battle on an awesome map. I know I want it to be in a tavern of some sort with a mezzanine.

Fortunately, Mike Schley’s map of the Blue Water Inn from Curse of Strahd works perfectly for that. If you’re not familiar with that particular map, here it is:

My plan is to print this bad boy up and put it on some thick poster board. Then I’m going to print out all of the bad guys and turn them into tokens.

Hopefully, the fight will go on throughout the entire place with ninjas, ogres, and bakemono attacking from all angles.

Okay, all I need now are the Three Masters.

The three masters work for Madame Du of the Du Clan. They are Zorr de Feng, a thri-kreen warrior; Sine du Heliu, a weretiger martial artist; and Zhouyo Eryu, a vanara shaman.

Whirlwind Attack. Zorr spins her gythka rapidly around her, trading it between her four arms. While she does this, all attacks against her are made at disadvantage. In addition, each creature that starts its turn or enters a space within 5 feet of her must succeed on a DC 14 Dexterity saving throw or take 6 (1d8 + 2) slashing damage plus 7 (2d6) poison damage.

Shapechanger. Sine can use his action to polymorph into a tiger-humanoid hybrid, or into a tiger, or back into his true form, which is humanoid. His statistics, other than his size, are the same in each form. Any equipment he is wearing or carrying isn’t transformed. He reverts to his true form if he dies.

Keen Hearing and Smell. Sine has advantage on Wisdom (Perception) checks that rely on hearing or smell.

Pounce (Tiger or Hybrid Form Only). If Sine moves at least 15 feet straight toward a creature and then hits it with a claw attack on the same turn, that target must succeed on a DC 16 Strength saving throw or be knocked prone. If the target is prone, Sine can make one bite attack against it as a bonus action.

Multiattack (Humanoid or Hybrid Form Only). In humanoid form, Sine makes two fist attacks and one iron fist attack. In hybrid form, he can attack like a humanoid or make three claw attacks.

Bite (Tiger or Hybrid Form Only). Melee Weapon Attack: +7 to hit, reach 5 ft., one target. Hit: 9 (1d10 + 3) piercing damage. If the target is a humanoid, it must succeed on a DC 15 Constitution saving throw or be cursed with weretiger lycanthropy.

Steel Fist (Humanoid or Hybrid Form Only). Melee Weapon Attack: +7 to hit, reach 5 ft., one target. Hit: 8 (1d8 + 4) bludgeoning damage. If the target is a creature, Sine can choose one of the following additional effects:

Expert Climber. Zhouyu has advantage on Strength (Athletics) checks made to climb.

Spellcasting. Zhouyu is a 10th-level spellcaster. His spellcasting ability is Wisdom (spell save DC 15, +7 to hit with spell attacks). He has the following druid spells prepared:

Change Shape (2/day). Zhouyu magically polymorphs into a beast or elemental with a challenge rating of 3 or less, air elemental, earth elemental, fire elemental, or water elemental, and can remain in this form for up to 9 hours. Zhouyu can choose whether his equipment falls to the ground, melds into his new form, or is worn by his new form. Zhouyu reverts to his true form if he dies or falls unconscious. Zhouyu can revert to his true form using a bonus action on his turn. While in a new form, Zhouyu gains the game statistics and ability to speak, but his AC, movement modes, STrength, and Dexterity are replaced by those of his new form, and he gains any special senses, proficiencies, traits, actions, and reactions (except class features, legendary actions, and lair actions) that the new form has but that he lacks. He can cast his spells with verbal or somatic components in his new form. The new form’s attacks count as magical for the purpose of overcoming resistances and immunity to nonmagical attacks.

Help me get the word out by sharing this posting on social media. It only takes a moment and it’d mean a lot to me.

Next up, I’m going to show you how I make monster tokens for large battles.