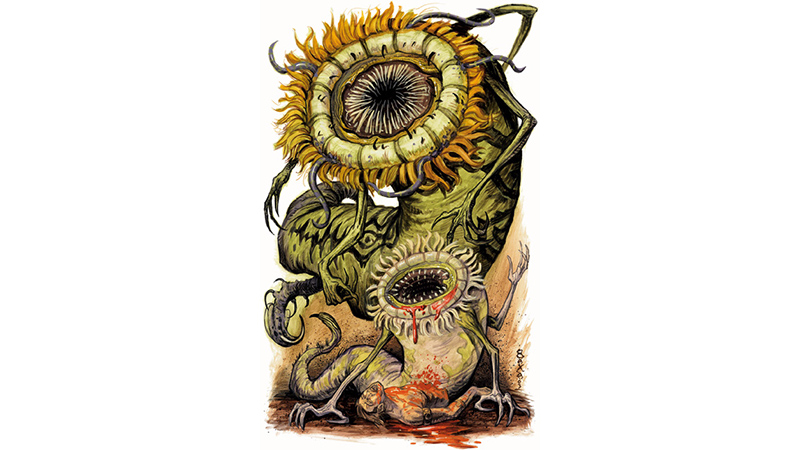 Phaerimm are powerful magic-using beings that move by natural levitation. They resemble upright cones, the widest part uppermost, and the point ending in a barbed stinger-tail. They are intelligent, inimical, and highly dangerous.

The phaerimm like to live near others of their own kind (for mutual protection and the social satisfaction of vying with each other in devious plans). However, they usually prefer to operate alone or surround themselves with magically-controlled slave creatures to carry out their bidding.

Phaerimm eat all reptiles and mammals, keeping them as slaves until their turn as dinner. They especially hate tomb tappers, who seem immune to phaerimm mind-controlling magics.

Magic Absorption. Any time the phaerimm is targeted by a spell that deals damage it is resistant to and it succeeds on its saving throw, it regains hit points equal to the amount of damage it would have taken had it failed its saving throw.

Innate Spellcasting (Psionics). The phaerimm’s innate spellcasting ability is Intelligence (spell save DC 18, +10 to hit with spell attacks). The phaerimm can innately cast the following spells, requiring no material components:

Tail. Melee Weapon Attack: +5 to hit, reach 10 ft., one target. Hit: 7 (3d4) piercing damage plus 18 (4d8) poison damage. If the target is a creature, it must succeed on a DC 18 Constitution saving throw or become paralyzed and infected with a disease: a phaerimm egg. While the creature is the host for the egg, its body levitates a few feet off the ground and it can’t move. The creature can repeat its saving throw once every 24 hour period, ending the effect itself on a success. Otherwise, over the next six days, the egg moves to the creature’s chest cavity, gestates, and forms a phaerimm hatchling. In the 24-hour period before giving birth, the hatchling begins to devour the host from the inside. Then, at birth, the phaerimm chews its way out of the host in 1 round, killing the host in the process. If the disease is cured or the creature passes its saving throw before the hatchling’s emergence, the unborn phaerimm is disintegrated.

Spell Reflection. If the phaerimm is targeted by a magic missile spell, a line spell, or a spell that requires a ranged attack roll, it can use its reaction to make an Intelligence (Arcana) check with a DC equal to 10 + the spell’s level. On a success, the phaerimm is unaffected, and the effect is reflected back at the caster as though it originated from the phaerimm, turning the caster into the target.

Support the blog with a share; it only takes a couple seconds!

Simply click one of the social share buttons below to let people know about the blog. The more fans I get, the more I can keep creating.

Hope you liked the phaerimm. Again, they have that awesome “wtf?” element to second edition D&D that I just love.