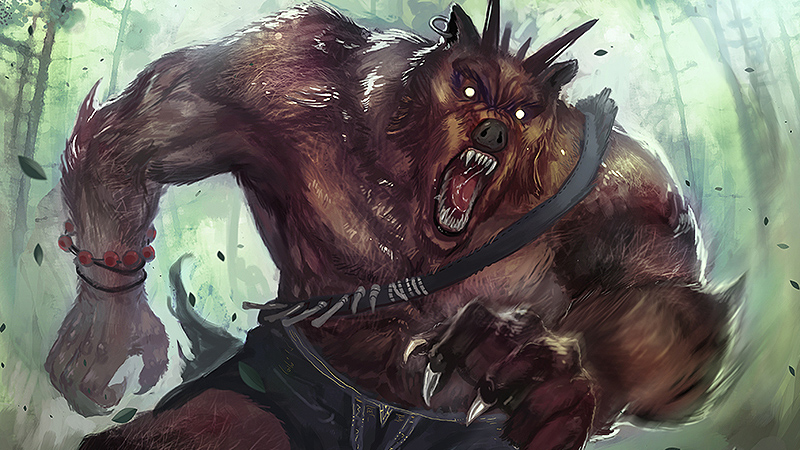 Another quick monster I needed today: a werebear ogre. Although ogres can’t technically turn into lycanthropes (RAW says humanoids only), I’m doing it anyway. So there.

Claw and bite attacks scale weird in D&D. They get a bump going from Small to Medium to Large, but mostlyplateau after that point. In fact, beyond wyrmling, all dragons have the exact same claw attacks: 2d6. Even ancient ones! The only thing that changes is the Strength mods.

For this guys’ stats, I lined him up with an abominable yeti. He got a bump in Wisdom and Charisma, too, which are mostly just window-dressing since Ogres don’t really use those skills other than for Perception, which werebears are exceptional at.

Challenge rating was tough as hell to calculate due to the large variance in hit points (with its DRs, he’s effectively got 300+ hit points), but a low Armor Class (dragging him down three ranks), lousy damage output (way down in the CR 4 – 5 area due to scaling issues) but great attack bonus (throwing him up a couple ranks). Knowing my players, they’ll deal with him quickly, so I thought a 9 felt appropriate. Plus, that was the lowest CR I needed to give him +4 prof bonuses.

Finally, I decided to give him a little edge, he’ll stick mostly to his hybrid form and use a size-appropriate weapon for it: a Huge greatclub.

Shapechanger. The werebear can use its action to polymorph into a Huge bear-ogre hybrid or into a Huge bear, or back into its true form, which is an ogre. Its statistics, other than its size and AC, are the same in each form. Any equipment it is wearing or carrying isn’t transformed. It reverts to its true form if it dies.

Keen Smell. The werebear has advantage on Wisdom (Perception) checks that rely on smell.

Bite (Bear or Hybrid Form Only). Melee Weapon Attack: +10 to hit, reach 5 ft., one target. Hit: 17 (2d10 + 6) piercing damage. If the target is a humanoid, it must succeed on a DC 16 Constitution saving throw or be cursed with werebear lycanthropy.

Another fun one for you to use today. Free to use, just not commercially. And the art isn’t mine, borrowed!

Follow along with the email opt-in on the right or in the footer to get daily updates.