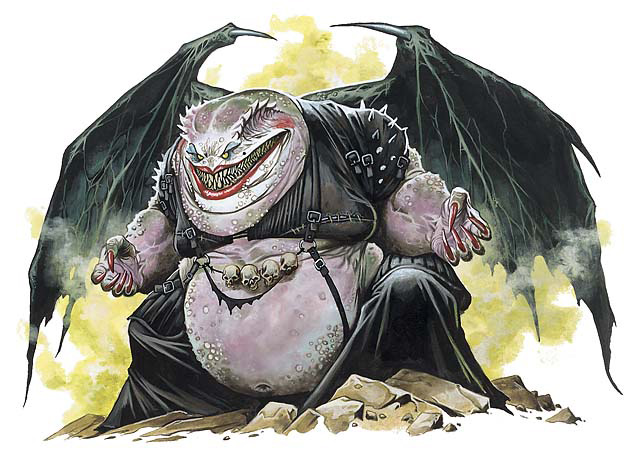 This bloated fiend has a massive paunch that hangs far below its waist. Where its warty pink flesh shows through its black robes, curls of stinking mist rise. The creature’s head is broad and monstrous. Its face has two yellow porcine eyes above a wide mouth filled with sharp teeth. Two bone ridges roll back along the top of its head. The thing’s lips are painted a glossy red, and blue eyeshadow darkens its eyes in the manner of a courtesan.

Paeliryons are crafty baatezu that manage vast spy networks extending across the planes.

Paeliryons dwell in comfort. Situated in the hearts of the infernal cities, they dine on delicacies of flesh and soul, preen themselves before massive mirrors, and bathe in filthy waters polluted by the noxious oils that drip from their bloated bodies. Decadent and disgusting, they lavish themselves in finery and excess

Infernal Spymasters. Information is the key to power. Brokers of the clandestine, blackmailers, and extortionists, paeliryons deal in knowledge. Their reach is long, extending into the other Outer Planes and beyond, even onto the Material Plane. They sit at the center of a vast web of flowing intelligence, plucking out those strands that gain them the most power. They then coerce those most affected by this knowledge, blackmailing them into selling their souls cheaply.

Paeliryons prey on mortals primarily. They also eavesdrop on other devils, even other paeliryons. From the lowly spined devil to the archdevils themselves, paeliryons have dirt on everyone in the Nine Hells

Damage Resistances acid, cold; bludgeoning, piercing, and slashing from nonmagical attacks not made with silvered weapons

Magic Resistance. The paeliryon has advantage on saving throws against spells and other magical effects.

Innate Spellcasting. The paeliryon’s spellcasting ability is Charisma (spell save DC 19). The paeliryon can innately cast the following spells, requiring no material components:

Retractable Claws. Melee Weapon Attack: +12 to hit, reach 20 ft., one target. Hit: 13 (2d6 + 6) slashing damage, and the target’s Charisma score is reduced by 1d4. The target loses all sense of self-awareness if this reduces its Charisma to 0. Otherwise, the reduction lasts until the target finishes a short or long rest.

If a humanoid’s Charisma is reduced to 0 from this attack, it becomes a lemure under the paeliryon’s control.

Belittle. The paeliryon unleashes a string of insults laced with subtle enchantments. Each non-devil within 30 feet of the paeliryon that can hear it must make a DC 19 Wisdom saving throw or become stunned. The creature remains stunned for 1 minute, until it takes damage, or until another creature uses its action to shake or slap the stunned creature. A target can repeat its saving throw at the end of each of its turns, ending the effect on itself with a success. A creature that succeeds on its saving throw or the effect ends for it is immune to the paeliryon’s belittle for 24 hours.