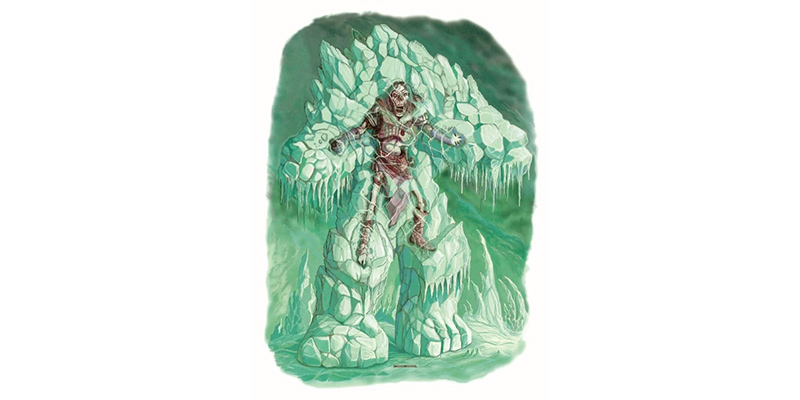 A thick shell of clear green-tinged ice completely encases a desiccated human corpse, its yellowed teeth bared in a rictus of death. The huge mantle of icy armor makes this fearsome apparition the size of an ogre.

The entombed are undead preserved by being encased in shells of ice—but still able to move and kill.

Entombed are human or humanoid undead entirely frozen inside an icy sheath that gives them the stature of an ogre.

The face of one of these creatures is usually frozen in a rictus of fear or sorrow—its flesh, hair, and eyes are always very well preserved, though the skin sometimes takes on a frozen whitish tone.

Freeze. A creature that touches the entombed or hits it with a melee attack while within 5 feet of it must make a DC 17 Constitution saving throw. On a failed saving throw, the creature is partially frozen. While partially frozen, the creature’s speed is halved and it takes a -2 penalty to AC and Dexterity saving throws, and it can’t use reactions. On its turn, it can use either an action or a bonus action, not both. Regardless of the creature’s abilities or magic items, it can’t make more than one melee or ranged attack during its turn. A frozen creature can make another Constitution saving throw at the end of each of its turns, ending the effect on itself with a success.

Snow Camouflage. The entombed has advantage on Dexterity (Stealth) checks made to hide in snowy terrain.

Immure. Melee Weapon Attack: +11 to hit, reach 5 ft., one creature the entombed is grappling. Hit: the entombed traps the creature in solid ice. While trapped, the creature can use its action to attempt to break out of the ice with a successful DC 17 Strength check on each of its turns. Otherwise, the creature can’t take actions or reactions. If a creature’s hit points are reduced to 0 while trapped in ice, it dies and rises as a new entombed in 1d4 rounds.