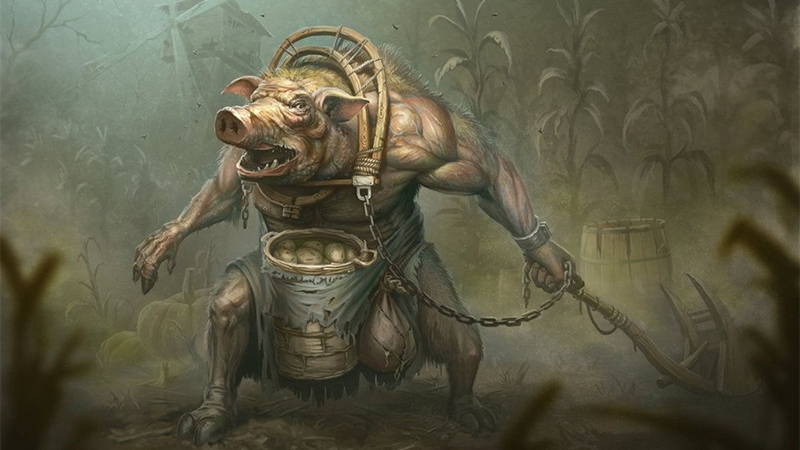 Some time ago, hags learned that basic mercenaries don’t always cut it. They’re lazy, stupid, and often poorly trained. If anything, they can be a real burden on a coven’s operation. “More trouble than they’re worth!” quite a few hags have noted. Fortunately, Mama Jeejee, one of the oldest and cleverest wart-faced witches there ever was, came up with a solution: pigpeople.

Cooking up a concoction of her best polyjuice, Mama Jeejee invented a brew that, once drank, turned a man into something not quite porcine, not quite humanoid. Whatever it is, it’s loyal and it follows the hags commands without fail.

Pigmen and pigwomen are taller and sturdier than most humanoids. Of course, they’re dumb, too, but that’s not necessarily a bad thing. Dumb things are easier to charm. They don’t talk back. And they fight much longer than they should–ie, poor self-preservation.

Charge. If the pigperson moves at least 20 feet straight toward a target and then hits it with a tusk attack on the same turn, the target takes an extra 7 (2d6) slashing damage. If the target is a creature, it must succeed on a DC 13 Strength saving throw or be knocked prone.

Relentless (Recharges after a Short or Long Rest). If the pigperson takes 10 damage or less that would reduce it to 0 hit points, it is reduced to 1 hit point instead.

Multiattack. The pigperson makes two attacks with its scimitar.

If you aren’t already, be sure to sign up to the mailing list by entering your email in the box on the sidebar or down in the footer.