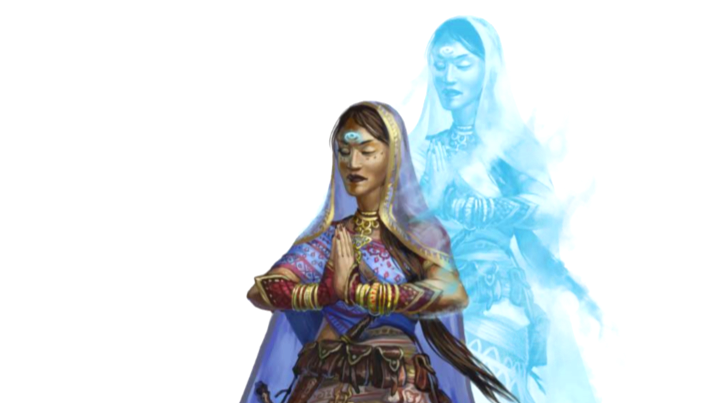 At 1st level, a cleric gains the Divine Domain feature. The following Psychic Domain option is available to a cleric in addition to those normally offered.

The psionic gods teach that the body is a vessel and the world is a myth. All that matters is cognition. Worshippers of the gods of psychic powers not only draw their powers from their gods but from within themselves.

You gain domain spells at the cleric levels listed in the Cleric Domain Spells table. See the Divine Domain class feature for how domain spells work.

When you choose this domain at 1st level, you gain proficiency with heavy armor.

Starting at 2nd level, you can use your Channel Divinity to assault enemies with your innate psionic abilities.

As an action, you unleash a psychic torrent in a 30-foot cone extending from you. Each creature in the area must make an Intelligence saving throw. A creature takes psychic damage equal to 2d10 + your cleric level on a failed saving throw, and half as much damage on a successful one.

Starting at 6th level, your mastery of the mind grants you special abilities.

At 8th level, you gain the ability to infuse your weapon strikes with psionic energy. Once on each of your turns when you hit a creature with a weapon attack, you can cause the attack to deal an extra 1d8 psychic damage to the target. When you reach 14th level, the extra damage increases to 2d8.

At 17th level, you achieve perfect duality, allowing you to further defend yourself against assaults from within and without.