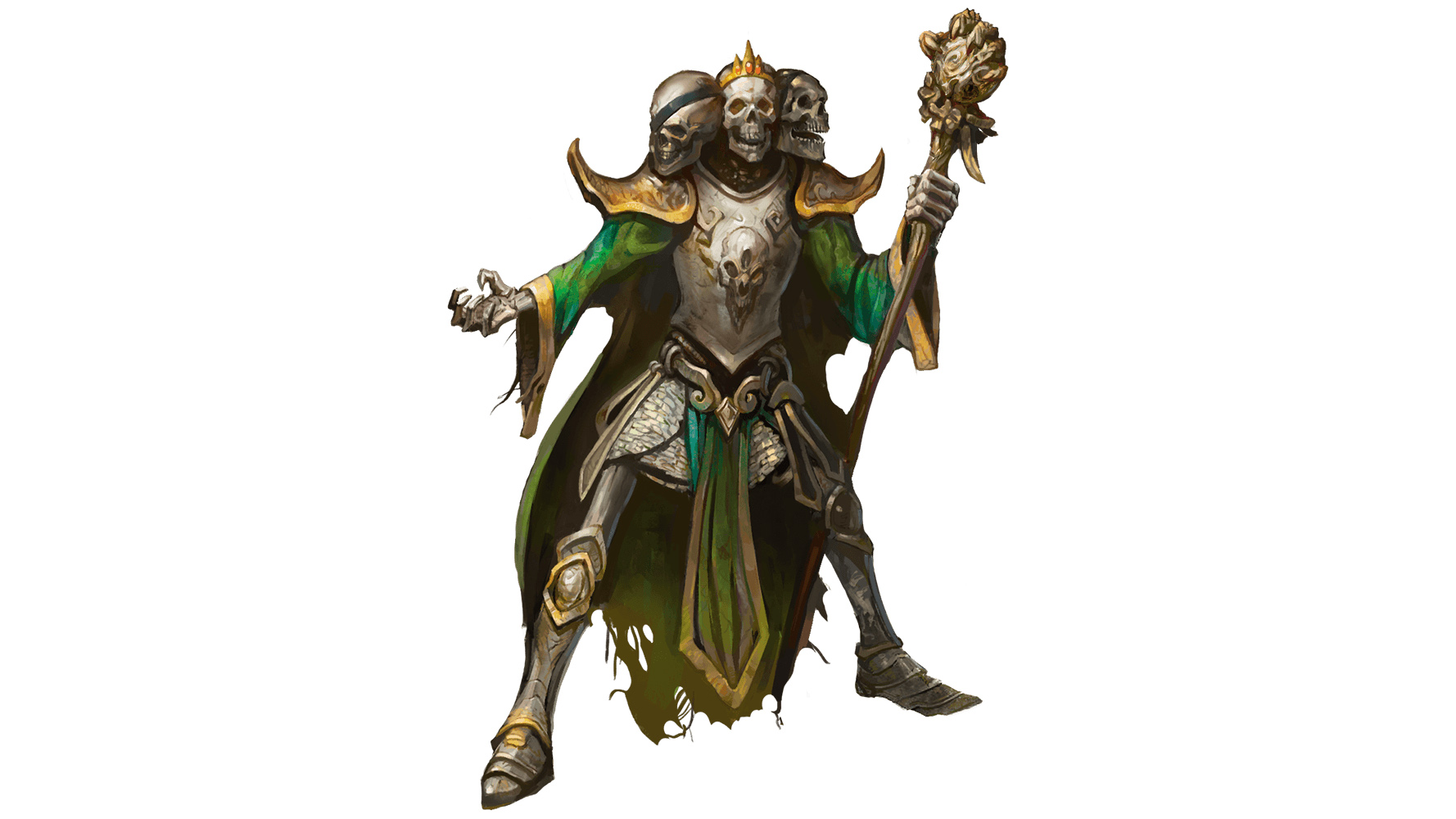 If you’re an avid reader of Keith Ammann’s amazing monster tactics blog, The Monsters Know What They’re Doing, then no doubt you’ve probably read his recent article on skull lords. If you’re looking for tactics on how to run this awesome beastie from Mordenkainen’s Tome of Foes, then be sure to zip over and read Keith’s article: Skull Lord Tactics.

To piggy-back off Keith’s article, I’m going to offer up some baddies to help support Skullie Skull and his Bickering Bros:

Personally, I love the Skull Lord. I mean, the guy (guys? girls? combination?) is totally ridiculous. Three heads, all enemies in life, constantly bickering with each other over what to do, who to kill, etc.

Also, Skull Lord totally sounds like an awesome name for a metal band. But I digress.

One thing that really stood out in Keith’s article is his mention of how the Skull Lord works better as a front-line support caster than a solo boss.

If you haven’t already read Keith’s article, here’s a rundown of the Skull Lord’s basic tactics:

Okay, so that’s the basics. Again, be sure to read up the article yourself to get more details.

Keith points out that the Skull Lord’s biggest weaknesses are Constitution and Wisdom-based saves, which the Skull Lord stinks at despite its higher challenge rating. In addition, it is immune to most conditions with the exception of paralysis and restrained. Therefore, it’s going to try to prevent those conditions as much as possible.

What kind of support is needed for the Skull Lord?

The Skull Lord has some glaring disadvantages. A few whacks from high-level melee fighters and he’s as good as dead. Therefore he needs some stuff to get in the way. Fortunately, his minions are good for that, but it gobbles up all his legendary actions to create them. And he only gets 5 at a time.

As a Challenge Rating 15 bad guy, chances are he’s going to go up against the PC’s sometime around levels 10 (for a deadly encounter), and maybe even earlier than that if it’s the big bad evil guy for a campaign.

If he is the BBEG for level-10 PC’s, I say toss in another 500-1,000 XP per PC worth of bad guys. It doesn’t have to be a lot (in fact, I recommend keeping it closer to 1:1 monster to PC’s), but have each one play a specific role to support the Skull Lord (and vice versa). Yes, it’ll be tough, but there’s nothing worse than a BBEG fight that ends quickly because it’s “balanced.” If you ain’t killing at least one PC in a BBEG fight, you’re probably doing it wrong.

Here’s some canned undead that works at that level:

That’s all of the out-of-the-box stuff. Of course, I’ve never been an “out-of-the-box” kind of guy. After all, the skull lord is pretty creative, as are the ones that created it. It makes sense to me that it would have some specialized undead working with to ensure that pesky adventurers didn’t foil its wicked plans!

The two things that the Skull Lord really needs to help it out are melee undead that can easily tie up melee fighters, especially those capable of smiting and dealing radiant damage. I’m envisioning a weenie grappler. Maybe even a bunch of them. They’re squishy, but auto restrain. This increases the effectiveness of the other attackers on the field, and attacks that rely on Dexterity saves. I think skeletal constrictor snakes might be pretty cool for this. Plus, they’re large, too!

Speaking of Dex saves, the skull lord doesn’t have a whole lot that works with Dex saves. To balance that out (and boost our snakes), something that could cause Dex saving throws would be pretty useful. Looking your way again, flame skulls.

To really double down on the poison effects (Keith suggests lots of cloud kill), other creatures that could use poisonous area effects might be good, too. Poison spray is a cool little effect. It’s all or nothing, but given to another type of weenie might work well. I’m envisioning some kinda horrific undead monstrosity that barfs up poison gas.

Finally, since when creatures are grappled in 5e, they don’t enter the grappler’s space, this creates the perfect opportunity to throw swarms at the grappled. For whatever reason, there are exactly zero undead swarms in any of the books (as far as I can tell), which to me is just sucky. So how about a swarm of crawling claws seems like a no-brainer.

Those who live cruel and mean lives often die cruel and mean deaths. And sometimes, those cruel and mean souls come back as cruel and mean undead. The venom maw is an undead being created by Orcus so it may continue to spread the hate and vitriol it shared in life. They’re foul, distorted beasts, that belch poison with each whining breath. Without a victim to infect with its cruelty, the venom maw sits in pain, clawing at its own face, begging its dark god to end its misery.

Claws! Why’d it have to be claws! Sometimes, necromancers just have too many extra hands. And why waste a good crawling claw to run around on its own when you can have an entire swarm of crawling claws?

Undead Fortitude. If damage reduces the zombie to 0 hit points, it must make a Constitution saving throw with a DC 5 + the damage taken, unless the damage is radiant or from a critical hit. On a success, the zombie drops to 1 hit point instead.

Constrict. Melee Weapon Attack: +4 to hit, reach 5 ft., one creature. Hit: 6 (1d8 + 2) bludgeoning damage, and the target is grappled (escape DC 14). Until the grapple ends the creature is restrained, and the zombie can’t constrict another target.

Cunning Opportunist. The venom maw has advantage on the attack rolls of opportunity attacks.

Unarmoured Defense. While the venom maw is wearing no armor and wielding no shield, its AC includes its Constitution modifier.

Claws. Melee Weapon Attack: +5 to hit, reach 5 ft., one creature. Hit: 8 (2d4 + 3) slashing damage. If the target is Large or smaller, it is grappled (escape DC 13). Until this grapple ends, the creature is restrained and the venom maw can’t use its claws on another target.

Poisonous Words. A creature that the venom maw is grappling must make a DC 13 Constitution saving throw, taking 6 (1d12) poison damage on a failed save, or half as much damage on a successful one.

Turn Immunity. The swarm is immune to effects that turn undead.

Man, I love weenie monsters. And since so many of these undead monsters I’ve created pair up well with other undead (especially those that have access to cloudkill), they’re going to be a hoot to play.

Again, be sure to check out Keith Ammann’s blog, if you haven’t already.

And make sure to sign up for more cool monsters and playable races; the opt-in is on the right side and down in the footer.

As usual, these monsters are free for you to use in your 5e campaigns. Just not commercially! And the art isn’t mine; borrowed from an unknown artist.